Please ensure Javascript is enabled for purposes of website accessibility
Log In Help Join The Motley Fool
Free Article Join Over 1 Million Premium Members And Get More In-Depth Stock Guidance and Research
By John Rosevear - Feb 17, 2020 at 10:05AM

Ford revealed its launch plan and sales expectations for the new Bronco to its U.S. dealers in a meeting in Las Vegas on Sunday, and there were a few surprises -- including the fact that a second, smaller Bronco is coming soon.

If nothing else, Ford's sales expectations for the Bronco, and its plans to maximize profit margins, make this news noteworthy for auto investors. Here's what we know.

What we learned about Ford's Bronco plans

Here are the high points of Ford's presentation to dealers on Sunday, as recounted by dealers who were in the room and as reported by multiple media outlets.

Production will begin in early 2021 -- a bit later than expected -- at Ford's Michigan Assembly Plant in Wayne, Michigan.

Ford told dealers that it will reveal a second, smaller SUV called the Bronco Sport in April, likely at the New York International Auto Show. 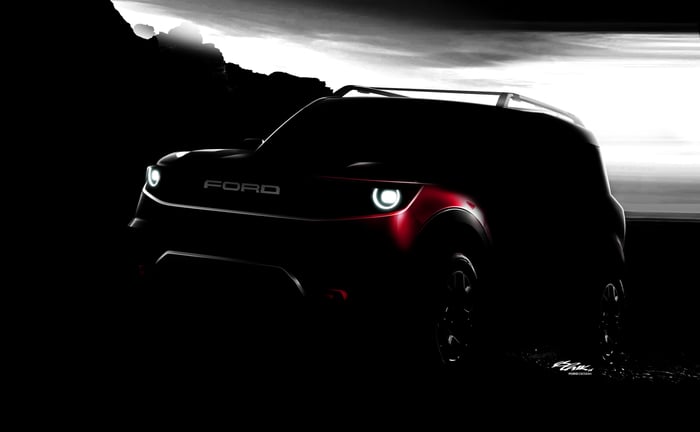 The Bronco Sport is a unibody vehicle that shares the all-new Escape's architecture. It's expected to be similar in size to the Jeep Compass, with all-wheel drive and an optional hybrid powertrain.

Production of the Bronco Sport will begin in the fourth quarter of 2020.

Ford will offer "hundreds" of accessories for the new Bronco models, in a bid to boost profitability for itself and its dealers. Ford promised the dealers that those accessories will be available right away when the new Broncos are launched.

Ford has made it clear that these aren't going to be low-volume, niche products. Dealers were told that Ford expects sales of the "Bronco family," including both the Bronco and the Bronco Sport, to exceed 200,000 units a year right away, starting in 2021.

That's an aggressive number, but it's not outrageous. Consider that in 2019, Fiat Chrysler sold 228,000 Wranglers, another 40,000 examples of the closely related Gladiator pickup, and almost 144,000 Compasses.

More to the point for investors, the hope is that the new Broncos will give Ford's margin in North America a much-needed boost. Ford's operating margin in its home region slipped to just 2.8% in the fourth quarter of 2019, as high incentives and ongoing product-line shuffles eroded its once-strong profitability.

The new Broncos are key parts of a broader product revamp that CEO Jim Hackett hopes will boost the region's profitability significantly over the next couple of years. They're probably not the most important parts of that effort -- the all-new F-150 pickup, coming late this year, will be the biggest contributor -- but Ford's sales-volume expectations and its commitment to a robust line of accessories make clear that the new off-roaders are expected to make significant contributions to profitability.

Assuming that Ford delivers strong products (likely), and that new-vehicle demand in the U.S. remains robust (less certain), auto investors should expect the new Broncos to make a nice positive contribution to Ford's margins next year.