SpaceX has not yet received permission from NASA to fly astronauts aboard its Crew Dragon space capsule. But once it does receive permission -- perhaps just months from now, seeing as SpaceX's first crewed mission is expected to take off by mid-year -- NASA astronauts may not be the only persons flying aboard Crew Dragon.

This morning, privately held, Vienna, Virginia-based Space Adventures announced it has reached an agreement with SpaceX to have the latter fly four "private citizens" -- space tourists -- aboard Crew Dragon in the vessel's "first Crew Dragon free-flyer mission." Space Adventures would find the customers, and then subcontract with SpaceX to fly them. 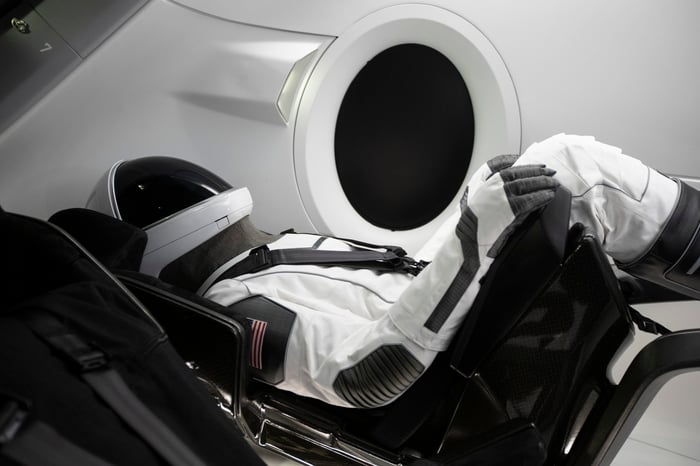 "Free-flyer" refers simply to the fact that the Crew Dragon mission in question will not be flying to anywhere in particular. Rather, it will go up, and come back down, stopping nowhere in between. The mission in question is not expected to take place before late 2021, and might not happen before mid-2022.

Once it happens, the companies will send Space Adventures' customers on a five-day flight through Earth orbit, departing Cape Canaveral atop a SpaceX Falcon 9 reusable rocket. The flight is expected to top out at an altitude two to three times higher than the International Space Station. As such, SpaceX's passengers will travel not only farther than any other space tourist before them -- but in fact farther than any human has ever traveled from Earth, excepting only the Apollo moon mission astronauts.

They'll also, incidentally, fly farther than either Virgin Galactic (SPCE -0.56%) or Blue Origin are planning to send their space tourism customers. And this may be the biggest news of all: In one fell swoop, SpaceX seems to have claimed for itself the title of "top company" in space tourism -- at least when measured by altitude.