Please ensure Javascript is enabled for purposes of website accessibility
Log In Help Join The Motley Fool
Free Article Join Over 1 Million Premium Members And Get More In-Depth Stock Guidance and Research
By Brian Withers - Feb 18, 2020 at 8:39AM 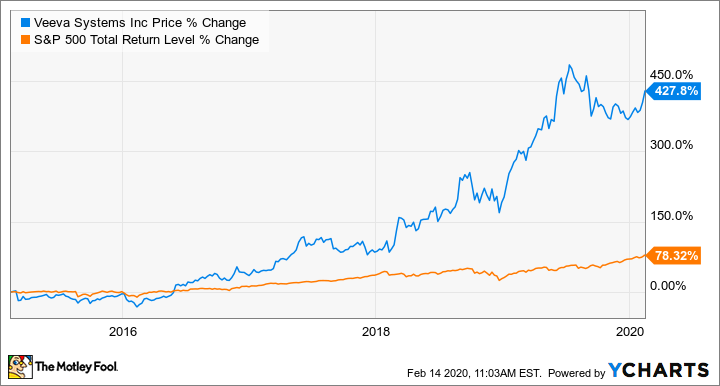 What do the next five years have in store for this software-as-a-service specialist? Let's find out.

Getting deeper into life sciences

Veeva serves the life sciences industry with software that can help in just about every process area across the enterprise. The first of its two products is called Commercial Cloud, which was released in 2007 to help customer relationship management for marketing and sales. The second is Vault, which was released in 2011 and touches all phases of the life cycle of a product: research and development, clinical trial management, claims, submissions to regulatory agencies, manufacturing, quality, and product safety. Vault has been even more successful and now represents over 50% of the top line. 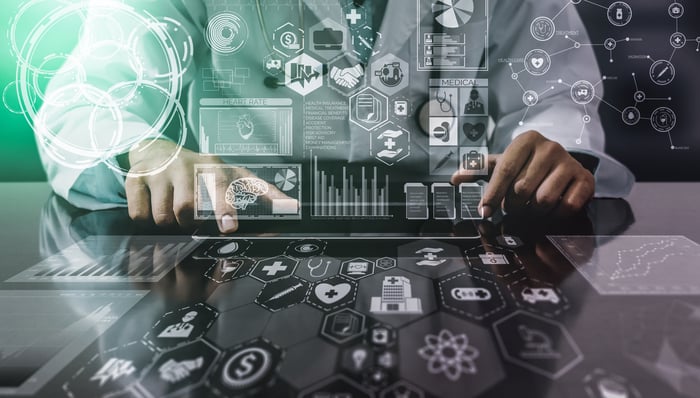 The company uses a land-and-expand strategy to grow its business. Customers often start with one module of Vault or Commercial Cloud and expand into other functional areas as teams realize the benefits of using the software. To understand the power of this approach, let's look at customers that started with Vault in 2015. Today, this cohort has implemented 2.9 Vault products on average and annually spends more than six times the amount they did in their first year.

The company projects that it can reach $3 billion in annual revenue by 2025, with $2 billion coming from Vault and the remainder from Commercial Cloud. Getting there will be a combination of attracting new customers, expanding within existing customers, and growing its reach into new industries.

The Vault product helps life sciences companies operate in a compliant manner, so it's not surprising that it has been expanded to serve three other regulated industries: chemical, consumer products, and cosmetics. Even though this product is in the "early adopter" phase, the company has already signed more than 40 customers, four of which are spending in excess of $1 million annually. Management isn't providing estimates of how much revenue could be attributed to these adjacent opportunities in the years ahead, but it indicates that this opportunity makes up $1 billion of its estimated $10 billion addressable market.

What's most impressive about the new industry products is that they are largely organic and haven't required acquisitions to build a solution that resonates with new customers. The company has a solid software platform to reach the $3 billion revenue goal for 2025, but it doesn't have all of the employees it needs.

More than tripling its employees

Today, Veeva has about 3,000 employees, and CEO and Founder Peter Glassner estimates it will have to reach 10,000 employees in the next five years to support its growth. This means hiring about 3.8 people per day (probably more considering attrition) over that time period. Glassner understands the importance of this effort to the company's overall success. At the most recent investor day event, he spent time covering how it would grow its employee base "the right way."

The CEO focused on three different areas: team, autonomy, and innovation. Team is about ensuring it is attracting and hiring the kind of staff that will thrive in its fast-paced culture. Autonomy is a focus on keeping the "start-up" spirit, not worrying about complete efficiency and allowing the teams to operate without significant oversight. Lastly, being focused on ensuring that it's using technology tools to make its global employee base effective in their day-to-day work.

Having the best talent and a great culture can be the fuel to propel companies to succeed. However, if talent and culture are managed poorly, it can lead to mediocre results. One way for investors to keep tabs on employee sentiment is an independent website called Glassdoor. It allows current and former employees to post reviews, rate the company and the CEO, and indicate whether they would recommend the company to a friend. Currently, Veeva's score on Glassdoor for "recommend to a friend" is 51%. This is especially disappointing considering that neighboring SaaS giant salesforce.com scored 87%, and Veeva's number has decreased from 74% in July 2017. Granted there are only 281 reviews out of an employee base of 3,000, but this is one indicator that investors should keep tabs on.

Veeva has a lot going for it: tremendous momentum, products customers love, and a huge market opportunity. No wonder its stock is premium priced at 23 times sales and 63 times forward earnings. The sky seems to be the limit for this innovative software-as-a-service company, as long as it doesn't lose focus on attracting and retaining the talent it needs.