It's merger season among the financials -- and in the housing rental industry as well.

Shares of Legg Mason (LM) stock just jumped 23.6% (as of 10:40 a.m. EST on Tuesday), and Franklin Resources (BEN -3.06%) stock is up 6.3%. No surprise there. The two financial powerhouses just announced that they will be merging to create a "$1.5 Trillion AUM [assets under management] global investment manager," and investors like that news a lot.

But why is Front Yard Residential (RESI) moving higher as well -- up 10.9% -- when it has no relation to this merger whatsoever?

Answer: Because Front Yard Residential is undergoing a merger of its own. 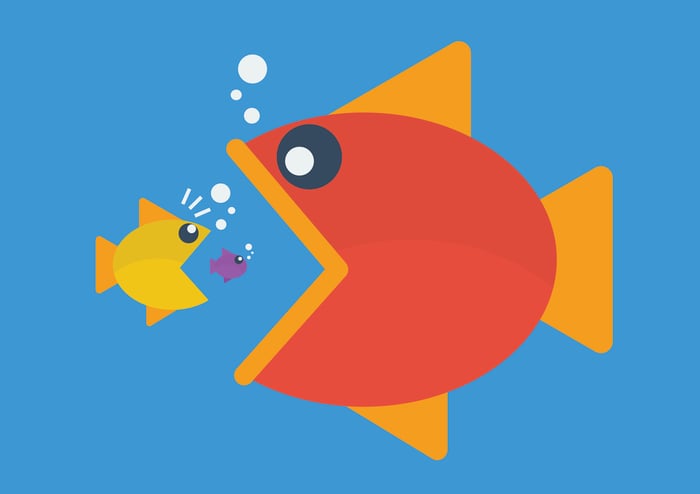 Let's break all this moving and shaking (and merging) down for you.

In the day's biggest development, asset manager Franklin Resources, which runs Franklin Templeton, announced that it will acquire bluest of blue chips Legg Mason in a $4.5 billion deal, paying $50 per Legg Mason share and taking on $2 billion of Legg Mason's debt besides (which actually makes the total value of this deal closer to $6.5 billion than $4.5 billion).

Bringing Legg Mason's over $806 billion in assets under management in-house, this deal will more than double Franklin Resources' AUM to $1.5 trillion, justifying the latter firm's statement that "this is a landmark acquisition." (For his part, Legg Mason CEO Joseph Sullivan agrees that the firms will be a "strong fit.")

The combined firms are projecting "upper twenties percentage GAAP EPS [earnings per share] accretion in Fiscal 2021" before considering the cost of various one-time charges. "Synergies" from the deal could include about $200 million in cost savings for the combined firm; those could begin emerging after the deal closes before the end of the third quarter of 2020.

And what about the Front Yard Residential deal? While smaller in size than the "landmark" deal between Legg Mason and Franklin Resources dal, this one is pretty big in its own right. Valued at $2.3 billion, it will see "privately owned, vertically integrated real estate firm" Amherst Residential, a provider of single-family homes for rent, acquire Front Yard Residential Corporation -- also in the home-rental market -- for $12.50 per share, in cash.

At the stated price, Amherst is valuing Front Yard shares at about $675 million, so the balance of the stated value of this transaction will consist of Amherst assuming Front Yard's $1.6 billion debt load.

Closing in this latter transaction is slated to take place by the end of the second quarter of 2020, so Front Yard shareholders should expect to receive their cash payout even sooner than Legg Mason shareholders receive theirs.

How Legg Mason Is Shaking Things Up

Will These Stocks Continue Their Bull Run?