Please ensure Javascript is enabled for purposes of website accessibility
Log In Help Join The Motley Fool
Free Article Join Over 1 Million Premium Members And Get More In-Depth Stock Guidance and Research
By Jon Quast - Updated Feb 21, 2020 at 8:38AM

Disney doesn't want you to buy unlicensed products from anyone else.

Its official name is simply "the Child", but you might know it better as Baby Yoda. Whatever you call it, it's coming to toy shelves near you. In an announcement Thursday, the Walt Disney Company (DIS 3.30%) stated that merchandise related to its hit series The Mandalorian is slated for release next month. This will undoubtedly please fans who have fallen for the cuddly green Star Wars character.

Baby Yoda is a pop culture phenomenon, providing some much-wanted publicity for Disney's new streaming service. Disney+ launched on Nov. 12 2019, with the first episode of The Mandalorian dropping the same day. The timing of its release led to consumer demand for Baby Yoda toys during the important holiday season -- demand that licensed Disney toy manufacturer Hasbro (HAS 2.47%) was ultimately unable to meet. 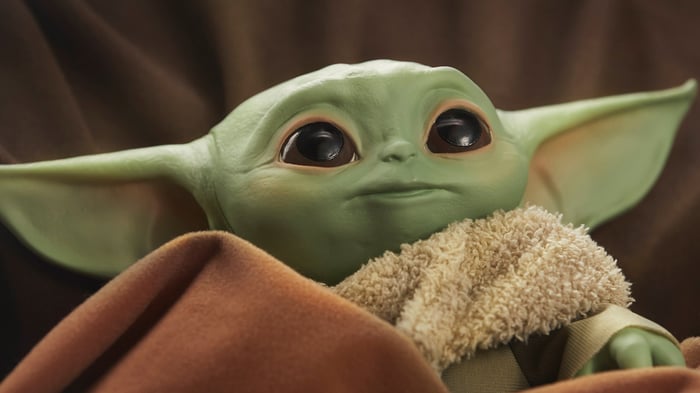 The battle for Baby Yoda

Seeing an opportunity created by strong demand and weak supply, many began marketing handmade Baby Yoda merchandise on Etsy (ETSY 4.56%). Disney subsequently issued take-down notices of these products, since it owns the copyright to everything Star Wars. Etsy has reportedly obliged, removing all products related to Disney's intellectual property.

Consumer discretionary spending doesn't come easy, so it's not a surprise to see Disney play hardball with Etsy. After all, the parks, experiences, and product segment was Disney's largest revenue generator in 2019. Hasbro should also be pleased to see Baby Yoda products removed from Etsy. The bulk of Hasbro's revenue growth in 2019 came from its partner brands segment -- mostly comprised of Disney products.

Those anxiously awaiting Baby Yoda's sophomore outing have much longer to wait. Season two of The Mandalorian won't begin streaming until October 2020.