Please ensure Javascript is enabled for purposes of website accessibility
Log In Help Join The Motley Fool
Free Article Join Over 1 Million Premium Members And Get More In-Depth Stock Guidance and Research
By Rhian Hunt – Feb 20, 2020 at 8:38AM

The coronavirus blocks Tyson from moving its birds at the pace expected by investors.

After riding high on the pork demand fallout from the "pig Ebola" virus currently sweeping much of the world, Tyson Foods, Inc.'s (TSN -1.51%) share prices slumped during January and February due to sales weakness centered on its chicken segment. The culprit is another pathogen, this one known as the COVID-19 coronavirus, a novel infection spreading across China. Possibly originating in bats, the virus causes flu-like symptoms and occasional fatal pneumonia -- along with uncertainty about the profitability of Tyson's important chicken segment, and thus the company's 2020 growth potential itself.

A tale of two viruses

Two very different viruses have affected Tyson's international sales in recent months. One of these, African swine fever virus, ASFV, or "pig Ebola," is a boon to the USA-based meat producer. However, another Chinese virus is having just the opposite effect. The COVID-19 coronavirus outbreak, starting in the city of Wuhan in December 2019, has prompted in-country quarantines, port closures, and travel disruptions, while killing approximately 1,870 people out of some 73,000 cases.

The Q1 earnings call's question and answer session revealed that anti-coronavirus measures like curfews are keeping Tyson's Chinese chicken plants from working at full capacity. Simultaneously, chicken imported from the USA passing through Chinese ports is often remaining on ships for days at a time on arrival because of COVID-19 related port closures. 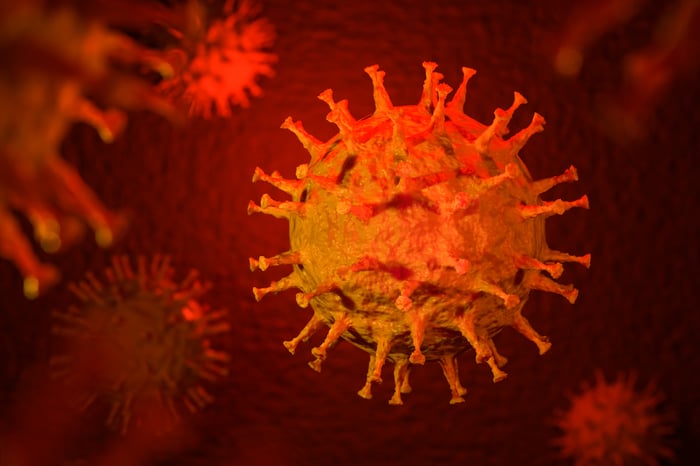 In a sort of seesaw effect, pig Ebola first caused powerful growth in global meat demand and prices. According to UN food and agriculture research, worldwide meat prices spiked close to 5% upward in November 2019, when African swine fever's impact on the market reached a maximum. Following this remarkable rise, coronavirus prompted global meat prices to plunge 4% in January 2020, according to the same research.

In 2019, Tyson's chicken segment made up 31% of its sales, second only in importance to beef at 36% and well ahead of the 20% of sales made up by prepared foods. With pork just 10% of sales, it's clear why rapidly increasing pork exports can't compensate for weakness in the chicken sector.

With much of the chicken sent to China destined for fast-food outlet use, COVID-19 tamps down demand in a way not experienced with pork, which is generally sold directly at groceries. Chinese people are opting to remaining at home for safety, cooking their own meals rather than eating out at crowded restaurants such as McDonald's and Kentucky Fried Chicken. The surplus meat is being sent onward to Australia, where oversupply has already driven down the cost of some popular meat items by approximately 33%. Current excess US chicken supply denies Tyson good prices in another major market, too.

In response to these pressures, Tyson laid off 500 workers, mostly at poultry plants, along with scaling back its growth forecasts for upcoming quarters. During the Q1 earnings call, Tyson CFO Stewart Glendinning specifically cited "continued weak market conditions in Chicken" as the first among several reasons why the company expected Q2 earnings to be lower than Q1.

People investing in food stocks have looked at Tyson's situation and clearly decided that the company has problems. Its share prices have fallen from an exuberant Jan. 13 peak of $93.48 to current levels around $80. While remaining above the company's roughly $60 stock price a year ago in February 2019, it shows lack of shareholder confidence in the meat producer's potential for more than modest 2020 growth.

The reaction is arguably excessive. Despite widespread media scaremongering about coronavirus, the virus thus far shows the limited spread characteristic of many zoonotic illnesses (those spread more easily from animals to humans, rather than between humans once infected). The bugbear of COVID-19 appears less menacing when its cases and fatalities are contrasted to the CDC's estimates of 36 million seasonal flu cases and 14,000 to 36,000 fatalities in the USA alone between Oct. 1 2019 and Feb. 8 2020.

Chinese epidemiologist Zhong Nanshan, for one, believes that the outbreak will peak during February and then decline. He should know: He's currently helping to lead the fight against COVID-19, and in 2003 he discovered the SARS coronavirus. During the SARS outbreak, Zhong contradicted official efforts to minimize the infection's seriousness -- indicators of expertise and honesty that lend some weight to his current forecast.

The drop in new infections among Chinese healthcare workers during recent weeks suggests that human transmissions may trend lower. Doctors and nurses, constantly exposed to sick people, have an elevated risk of infection above the general population. Fewer new cases among these professionals suggests declining numbers of highly infectious patients and possible abatement of the disease.

Tyson's current approximate 14.5 P/E (price-to-earnings) ratio is slightly above its five-year historical average 13.84 P/E. However, it remains below the P/E ratio of two of its main meat producer rivals -- Hormel's 28 P/E ratio and Puritan's Pride Corporation's (PPC -3.49%) approximate 18 P/E. With COVID-19 fairly likely to ebb soon, but ASFV still devastating pig populations around the globe, Chinese ports will probably open again, and fast food restaurant purchases rise, long before China's meat supply problems are resolved. These factors should help Tyson continue delivering profits into the longer term, while its P/E ratio compared to other major USA meat exporters makes it a potential good deal relative to other large stocks in the same sector.