Please ensure Javascript is enabled for purposes of website accessibility
Log In Help Join The Motley Fool
Free Article Join Over 1 Million Premium Members And Get More In-Depth Stock Guidance and Research
By Brian Stoffel - Feb 20, 2020 at 8:22AM

It isn't enough to be an SaaS company anymore. Consolidation is coming.

The story begins in 1999 -- a one-bedroom apartment in the Telegraph Hill neighborhood of San Francisco. That's when a young Marc Benioff founded Salesforce.com (CRM 3.50%).

This was the modern beginning of the software-as-a-service (SaaS) business model. Instead of paying big bucks at a brick-and-mortar location for a software package, customers could pay a much lower monthly fee for access to software via the cloud. 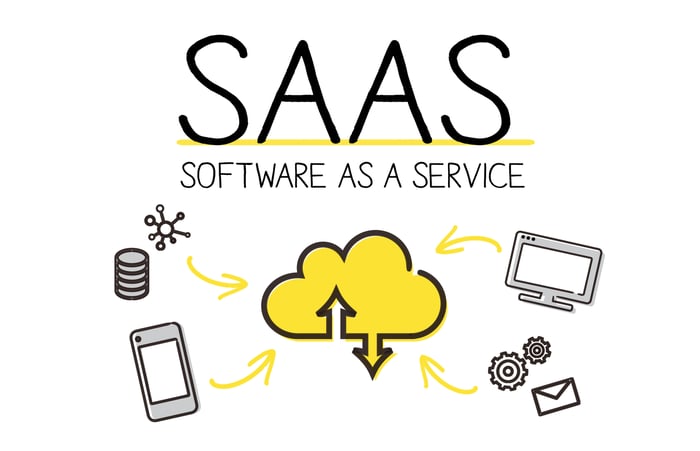 It took a long time for the business community to catch on. But over the past five years, few publicly traded companies have seen their stocks skyrocket quite like SaaS players.

But the market is evolving, and it won't be that way forever. A select few SaaS stocks will be emerging from the pack. I suspect Datadog (DDOG 7.29%) will be one of them. And I'm putting my money where my mouth is.

Here is a simplified version of the nuts and bolts of the SaaS business:

Perhaps its not surprising, then, that some of the biggest winners of the past four years have been SaaS players. An ETF that follows the sector -- PowerShares Dynamic Software ETF (PSJ 2.53%) -- has vastly outperformed the S&P 500 index. 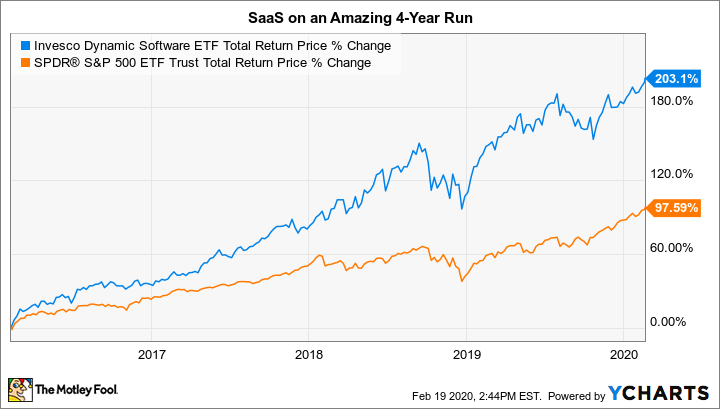 At one point, it truly seemed that if an SaaS company went public, it meant big gains for investors.

But in the evolution of any business model, shifts occur. That's what I believe will soon start happening within SaaS.

Think of it from the perspective of a chief information or operating officer: You've got all of these different SaaS tools, which are great. But with each passing year, you're adding new ones -- one to monitor security, another to make sure your apps are working as they should, a third to run your website. It's enough to make your head spin.

That's why I think there will soon be consolidation within the sphere. While a CIO could go out and get the best tool for each specific need her company has, I suspect that won't be the standard approach. Instead, the SaaS company that can provide a broad enough umbrella, with "good-enough" services will be the ultimate winner.

The simplification of dealing with a single platform, a single customer-service representative, and a single monthly billing will -- I suspect -- be enough to outweigh any efforts to optimize each individual software code.

That's one reason I'm very bullish on Datadog. The company has tools that can do a wide range of tasks, including:

During the most recent earnings call, management also announced it had released a security monitoring tool -- essentially signaling that it would soon include cybersecurity under its umbrella of tools.

This wide umbrella is paramount only because the company is growing so fast. Datadog isn't just creating tools in an attempt to lure new customers -- it is upselling existing ones in an effort to get them to dump their single-use SaaS providers.

In essence, Datadog is transitioning from an SaaS provider to a PaaS (platform-as-a-service) provider, where users can choose from several software solutions.

The results over the past three years speak for themselves.

That's stellar growth. One reason for it: Customers not only stick with Datadog for the long haul, they upgrade to include more tools over time. The proof: The company's dollar-based net retention rate has been above 130% for 10 consecutive quarters.

By filtering out the effect of new customers, this metric tells us that existing customers increase their spending by at least 30% every year with Datadog.

That's astounding. It's also what I believe will continue to happen with companies that have enough "good-enough" SaaS tools under one umbrella.

I already own Datadog shares in my family's portfolio, but given the trends that I see emerging, I will be adding to our position as soon as Motley Fool trading rules apply.

If you're interested in fast-growing cloud companies -- and have the stomach for the volatility that can accompany richly valued stocks like Datadog -- you should consider doing the same.