Please ensure Javascript is enabled for purposes of website accessibility
Log In Help Join The Motley Fool
Free Article Join Over 1 Million Premium Members And Get More In-Depth Stock Guidance and Research
By Billy Duberstein – Feb 22, 2020 at 9:30AM

All the reasons behind the rise of this high-flying big data analytics stock.

Big data analytics specialist Alteryx (AYX -3.71%) has been on a tear to start 2020. At first glance, it's not difficult to understand why.

Alteryx is a leading software company in the field of big data analytics. This sector is one of the hottest in the technology market, as businesses ranging from healthcare to retail to oil and gas are finding new and innovative insights from their vast troves of data. Yet despite the growth and importance of the sector, not all big data analytics companies are thriving. However, Alteryx is certainly one of the winners.

The company just capped off a mighty strong year in which revenue grew a whopping 65%. That includes a 130% expansion rate, meaning existing customers augmented their spending by 30% relative to last year. The company also added 30% new customers, including several leading household names. Finally, Alteryx is actually profitable, with $27.1 million in net income and $64.6 million in non-GAAP (generally accepted accounting principles) net income in 2019 -- a rarity for many high-growth software companies.

What is it that Alteryx is doing so right? And is this profitable growth sustainable? 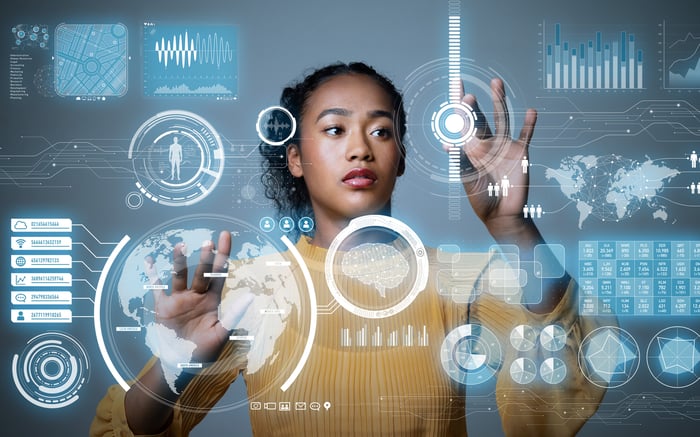 A focus on the user above all else

Founded in 1997, Alteryx was an early mover in big data analytics and formed its products based on how data analytics are actually performed in organizations -- with an emphasis on usability. Instead of making a coding platform, a data preparation product, or a visualization tool, Alteryx built out its offering as a comprehensive platform that covered all of those steps. It also integrated with widely used third-party services -- even those it may compete with. Additionally, Alteryx made its platform accessible to both advanced data analytics professionals and business professionals without any coding expertise, allowing them to collaborate and work together.

By developing a usable, common platform on which both data scientists and business analysts can interact, Alteryx is an ideal fit for corporate environments because each layer of analytics decision making is no longer siloed from the other.

I recently had the privilege of speaking with company CFO Kevin Rubin, who reiterated Alteryx CEO Dean Stoecker's mantra that Alteryx's software doesn't change the analytics process, but rather makes it easier. That may seem trivial to some, but in reality, it has led to a formidable moat in today's new age of tech companies.

Instead of pursuing a single technology, such as Hadoop, or a single type of coding technology, Alteryx made sure that its platform integrated with all leading data providers and analytics technologies, even potential competitors. For instance, Alteryx connects with both on-premise data sources and the major cloud providers alike, even though it may compete with cloud companies with their own in-house analytics software. In addition, Alteryx also exports to various data visualization tools such as Qlik or Tableau, which was recently purchased by Salesforce and is another potential rival.

In today's world of tech conglomerates, Alteryx customers benefit from the desire to be relatively "neutral" with regards to their main platforms so as not to be "locked in" to a single cloud storage or database vendor for all of their tech needs. For instance, a customer using Tableau's visualization may find their offering tailored to work better with Salesforce data exclusively, or a company using Microsoft business intelligence suite might find it optimized for Microsoft's Azure cloud.

By being neutral with its data sources and outputs and by covering most steps of the analytics process, Alteryx can be deemed a reliably neutral and comprehensive platform. Management says that an average analytic process uses six different input sources, so having that wide breadth and optionality is key for most large companies.

Since Alteryx is also a first mover with wide adoption, these third parties also need to integrate with Alteryx or miss out on picking up Alteryx's customers as their own.

Thus, by being user-friendly across an organization, neutral in terms of data sources and outputs, and a first-mover adopted across many leading organizations, Alteryx has managed to carve out a formidable niche as a two-sided platform in business analytics.

Enterprise software can be a very attractive business because once a vendor establishes itself as a leader and businesses standardize on it, the offering becomes difficult to displace. Think Microsoft Windows and Office, Salesforce CRM tools, or Oracle databases.

The more "mission critical" the function, the more solid the moat. While there may have been some technological barriers protecting software moats in the past, these barriers aren't quite as strong today in a world of open source software and cloud computing. Thus, usability and the "consumerization" of the enterprise is a key attribute today.

Therefore, Alteryx's attributes of user-friendliness and getting buy-ins from different types of stakeholders may be enough to sustain its position and growth for quite some time. In Alteryx's case, these attributes have enabled it to achieve some really impressive growth numbers, putting it in the top of a new class of enterprise-software players today.