Please ensure Javascript is enabled for purposes of website accessibility
Log In Help Join The Motley Fool
Free Article Join Over 1 Million Premium Members And Get More In-Depth Stock Guidance and Research
By Alison Healey – Feb 23, 2020 at 7:47AM

Volatility and uncertainty in the energy sector should not prevent investors from checking out a few possible buying opportunities.

A global liquefied natural gas (LNG) glut, declining gas prices, project permitting stalls, and coronavirus concerns are only a few of the factors that have been weighing on energy markets and the companies within the underperforming sector.

But a Canadian pipeline builder, an LNG player, and a renewable fuel business could still be great additions to your portfolio. Here's why investors should take a look at Enbridge (ENB -5.09%), Cheniere Energy Partners (CQP -6.21%), and Clean Energy Fuels (CLNE -7.14%). 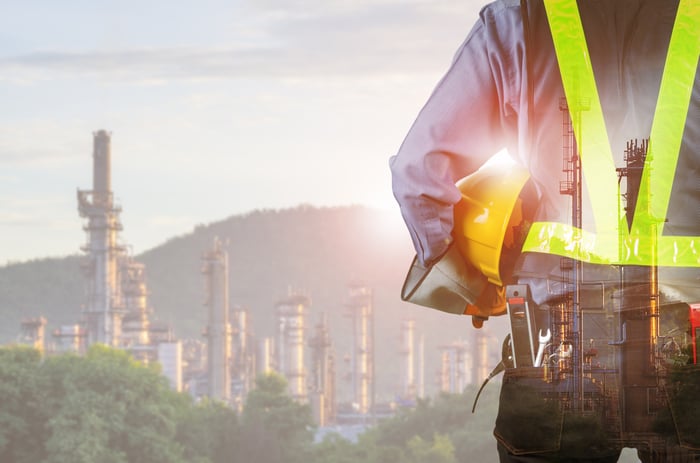 Enbridge, a Canadian oil and gas pipeline operator, seems like a good buy right now based on management's actions to shore up the company's financial footing and new projects put into service. Enbridge's management attributes recent earnings improvement to a focus on a "low risk pipeline-utility model," following through with asset sales, completing a three-year balance sheet strengthening plan, and starting up $9 billion worth of new revenue-producing assets over the course of the year.

In Q4 alone the company launched more than $7 billion in projects, including the Gray Oak pipeline and the German Hohe See offshore wind project, which represent a combined investment of nearly $2 billion for the company. The assets have long lives and contracts that should set investors up for long-term stable revenues.

Enbridge also recently showed improvement in its full year 2019 distributable cash flow (DCF), which increased to more than $9.2 billion from more than $7.6 billion in 2018, and it guided longer-term DCF growth in the range of 5% to 7%. The improvement could be the start of positive upswing following years of building new projects, the true extent of which hasn't been seen since the projects have less than a year of operating history.

Over the past year, the Canada-based company has underperformed the S&P 500, up roughly 15 percentage points. It is aiming for continued improvement with another $11 billion of what it characterizes as "secured organic growth projects" it will fund with equity. The company expects these projects to add "considerable EBITDA" as they come online, and management pointed out 2022 financial metrics may be higher than its target range based on these initiaitives and the chance of more non-core asset sales.

The company is an attractive option for the income investor based on a dividend yield at more than 5.7% and the company's plan to increase its dividend by 9.8% for 2020. It is important for investors to note, however, that despite recent improvements, there is significant work remaining, since the company's debt-to-equity ratio stands at more than 94%.

Cheniere Energy Partners is the operating partner of Cheniere Energy (LNG -6.64%), a developer of LNG export projects in Texas and Louisiana. Cheniere is the marquee name in the US LNG export game in terms of scale and its early mover status on getting projects built and running.

Investing at the partnership level rather than the Cheniere Energy level may be preferable for some investors because it pays a dividend, recently yielding nearly 7%, even as the company continues to work with its general partner to expand its Corpus Christi and Sabine Pass projects.

Shares of Cheniere Energy Partners were down roughly 15 percentage points over the past year, as earnings disappointed investors. However it is important to note that at the partnership level cash flow is typically seen as the key metric. In late January, the company said it would pay a cash distribution of $0.63 per share, which works out to $2.52 annually, within its guidance in the range of $2.55 to $2.65 for the year.

In addition, one of the things that recently hurt revenue and EBITDA is higher operating costs and expenses, primarily as a result of putting projects into initial service. But it is not unusual for the initial start-up period known as "commissioning" to be a rocky time for projects as massive as Cheniere's, and the situation may stabilize as the projects log more operating time and early kinks are resolved.

Cheniere's management has also said that because it sells the majority of its LNG under long-term "take-or-pay" contracts, it has experienced losses linked to changes in fair value of derivative contracts to purchase natural gas for liquefaction, and the company should be expected to experience gains and losses associated with the underlying commodities related to forward gas contracts.

So quarterly and even yearly ups and downs should be of little concern to the long-term investor considering a company that sees revenue contracted for periods as long as 20 years. It is important for investors to note, however, that Cheniere Energy Partners continues to carry a high debt burden, with a debt-to-total capital ratio of more than 96%, and this can be expected to remain as long as projects remain in construction. But the company has a solid record of opportunistically seeking refinancing in recent years, however, and has made progress in getting better terms.

Clean Energy Fuels (CLNE -7.14%) provides natural gas fuel and renewable natural gas fuel for the transportation industry in the U.S. and Canada, with a network of approximately 540 stations across North America that its owns or operates. The company is seeing sales pick up on its Redeem renewable commercial vehicle fuel, which reported a 30% boost in deliveries for 2019. It also got positive news when the federal production tax credit for renewable energy was extended at the end of last year.

Clean Energy Fuels has outperformed the S&P 500 over the past year, up more than 40 percentage points, but that number should be taken with a grain of salt since share price is is down more than 80 percentage points over the past decade. More important for the longer-term investor is the company's recent customer acquisitions, some which add several years of recurring revenue under contracts. This is the case with the company's seven-year contract with UPS (UPS -2.10%) for 170 million gallons of fuel for its fleet of heavy-duty trucks.

Clean Energy Fuels does not yet pay a dividend, but has the potential to be a great growth play as contracted revenue increases. Over the past year the company has reached multi-year deals for Redeem fuel with additional corporations and other entities, including shuttle and bus operators, rental car businesses, a country Department of Public Works, and several California municipalities. The company also unveiled a plan to exclusively offer its zero-carbon Redeem fuel at all its stations by 2025, a timeline it says will beat other competing alternative fuels initiatives, which it estimates may not reach the zero-carbon finish line until 2045.

In the near term the company may face an uphill battle convincing certain companies to transition to natural gas as a transportation fuel, particularly in an environment in which oil is relatively cheap. But the company's fuel contracts should continue to see new interest in regions with stringent environmental standards and as corporations continue to increase their use of renewables and work to decrease their carbon footprints, as they have in the case of corporate renewable power.