Boston Beer (SAM -2.79%) risks putting too many of its eggs in one basket, as hard seltzer couldn't keep earnings afloat in the fourth quarter. Although the brewer reported strong sales and growth in depletions -- shipments to distributors and retailers (an industry proxy for demand) -- earnings came in below expectations and guidance for the coming year fell short of forecasts.

CEO David Burwick told analysts Boston Beer is installing new capacity to produce greater seltzer volumes to meet demand, but it's hurting gross margin. While the brewer is investing in its infrastructure to become leaner and more efficient, management noted, "We expect this program to run for two to three years and begin showing margin improvement by the first half of 2021." Margins, though, will continue to be constrained in the meantime.

It sounds like a good problem to have. Boston Beer is struggling to keep up with demand for its Truly brand of hard seltzer, so it's building out its production capabilities to meet that demand. That doesn't sound much different than what happened to industry leader Mark Anthony Brands when there was actually a shortage of its White Claw hard seltzer this past summer, because demand was running so hot.

The problem is that more and bigger competitors are entering the market, and they're not going to necessarily suffer from the same capacity constraints limiting the top two seltzers on the market. Anheuser-Busch InBev (BUD -1.17%) is going to have three seltzers on the market; Molson Coors (TAP -0.91%) has committed to "aggressively" go after seltzer by introducing Vizzy, its second seltzer brand; and Constellation Brands (STZ -1.46%) will soon be introducing its Corona hard seltzer.

Although there's no guarantee any of these seltzers will make a dent in the dominant market share White Claw and Truly currently claim, drinkers will turn somewhere if they can't find their preferred drink, and each of the new brands from the large brewers has advantages, whether it's price, ingredients, or availability. 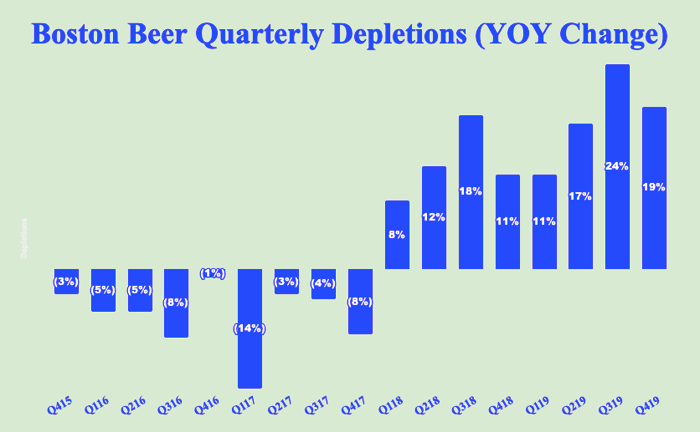 Boston Beer, though, is going all-in on seltzer and risks being caught with too big of a bet on the table if consumers don't continue to respond as they have. White Claw and Truly have owned the market, because consumer choice has been relatively limited in terms of hard seltzer selection, and that won't be the case anymore.

Revenue soared 34% during the fourth quarter to $301 million, while depletions jumped 25%, the upper end of the guidance range management provided. However, without the contribution of Dogfish Head, which Boston Beer acquired last year, depletions were up 19%, though that's still a strong record of growth.

Yet the more Truly the brewer produces, the less profitable it is because a lot of the production is contracted out. While that will eventually change over time and will incrementally benefit from the increased efficiencies Boston Beer is pursuing, Berwick says the situation won't be any different in 2020 than it was last year.

No ceiling in sight

Boston Beer founder and chairman Jim Koch told CNBC he sees the seltzer category doubling again this year, and some analysts see it almost quadrupling in size to over $4 billion in sales. As Koch noted, "We really don't know how far is up."

Yet as it expands, and as hard seltzer attracts the biggest brewers in the industry -- as well as numerous smaller players -- Boston Beer's position is in danger of being diluted with little backup in place since its flagship Samuel Adams beer brand remains in a tailspin, and its Angry Orchard hard cider is still declining.

Boston Beer stock is up nearly 30% over the past year but trading at 35 times forward earnings, four times sales, and over 70 times free cash flow, the brewer is not a cheap pick.