Please ensure Javascript is enabled for purposes of website accessibility
Log In Help Join The Motley Fool
Free Article Join Over 1 Million Premium Members And Get More In-Depth Stock Guidance and Research
By Jason Hall - Feb 23, 2020 at 6:30AM

One investor's journey, and lessons that all people can apply to their situation.

On the morning of Feb. 19, 2020, something momentous happened for me and my family as soon as trading opened on the New York and Nasdaq stock exchanges. I became a millionaire.

Now when I say momentous, it wasn't like winning the lottery. Nobody showed up at my front door with a giant fake check and a camera crew. We didn't pop open a bottle of bubbly (though we probably will this weekend). Neither I nor my wife made plans to show up at work and spray paint "I quit" on our bosses' car. 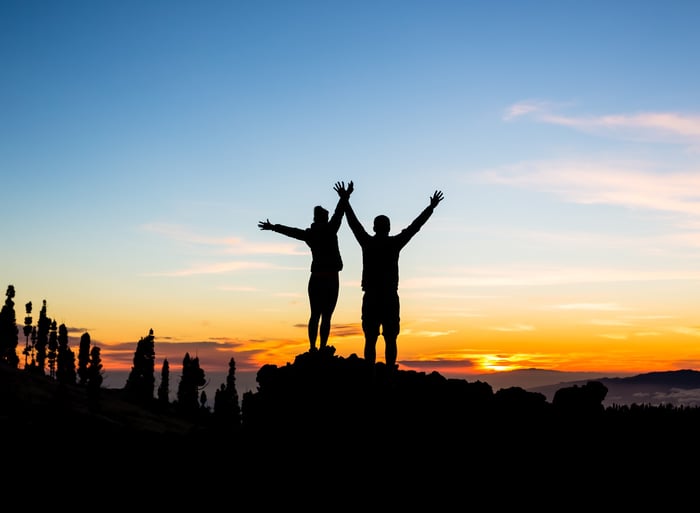 So maybe it wasn't really momentous per se. But it was still a major milestone in my family's wealth-building plan, and I think it represents an opportunity to consider how I got here and to share some lessons that may help others. So here goes.

In early October 2007, my wife and I coasted into Los Angeles in a U-Haul truck filled with what remained of our personal belongings. A few days prior, we were involved in an accident. Our truck rolled over, and the trailer is was pulling smashed into a tree.

In addition to those damaged goods (and the U-Haul, which was our only vehicle) we also had a few thousand dollars in the bank, most of which would be going toward the security deposit on our apartment.

You know what else happened early that October? The stock market peaked before the biggest global economic downturn since the Great Depression. Over the next 17 months the S&P 500 (^GSPC 1.73%) and Dow Jones Industrials (^DJI 1.27%) would lose more than 50% of their value as global banking and credit markets froze up and ground the world's economy to a halt. 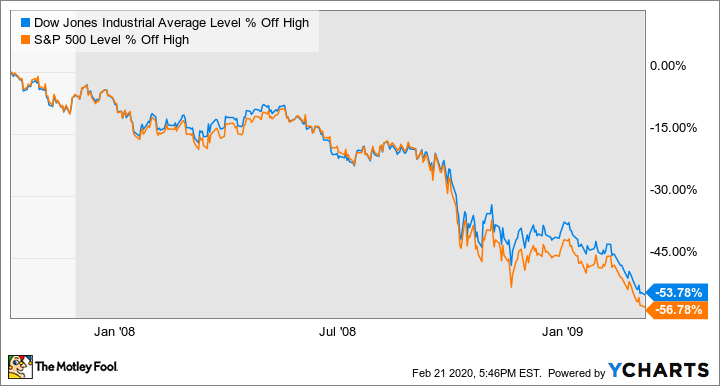 Oh, and did I mention we owned a house in Massachusetts at the time? Without belaboring the details, that house would be lost to foreclosure within a year from our relocation to California. Our net worth at the offset of the Great Recession may have been a negative number.

Now that I've painted a picture of two people on the financial brink, things weren't as bad as they seemed. OK, they were pretty bad, but since we were young and on the right side of disaster, we didn't realize how close we really were to financial ruin. We had gotten lucky in a few ways, because we practiced some basic, boring things: 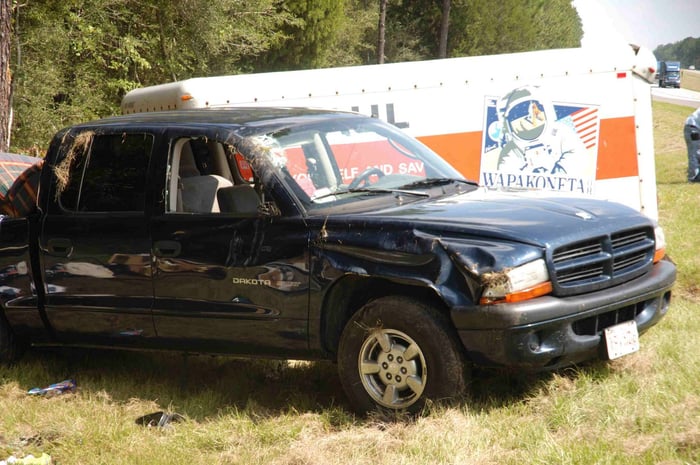 Our truck (after being put back on its wheels) and U-Haul trailer after the accident. Image source: author.

A little bit of prudence goes a long way. We didn't have much cash, but we were fortunate to have insured our belongings and thus avoided being in an even worse situation. Moreover, we didn't move on a whim; my wife was set to start a postdoc at UCLA, and I was taking a sales job that was a significant step up in income from my prior job.

The No. 1 rule to creating wealth

This is one of the most important reasons I broke the millionaire barrier by age 43: My wife and I earn a lot of money. Without getting too specific, we're in the top 20% of household income, thanks to my wife's spending more than a decade in college in graduate school to build a highly valuable skill set in her chosen field, and to my career as a prolific and successful -- relatively speaking -- writer.

Simply put, unless you win the lottery or inherit wealth, it takes money to make money.

But that's only part of the rule. It also takes discipline and living well below your means: There are plenty of people making far more than I do who have much less wealth. There's a big difference between having a million dollars and spending a million dollars (hint -- spending it is a good way to not have it).

Planting the seeds to grow a million dollars

This is the boring part of the story. Soon after getting our life back together and settling in, my wife and I did something we had never done before: We made a serious financial plan and a commitment to implement it. Within a few months, we were doing all of the following:

Not everyone can do all of these things, but we were fortunate enough to have high earnings (even as the Great Recession reared its head) that allowed us to do all of the things above. Moreover, we didn't live like paupers, either. We still ate out fairly regularly, went on vacations, and wasted money on the occasional splurge.

The biggest reason we were able to do all of these things was, obviously, our earnings. The second biggest reason is, we saved and invested first, "having fun" with what was left over.

Do that for the next dozen years, and you'll be on your way to making a million dollars, too.

Never underestimate the power of luck

A few really important things that have played enormous roles in my family's wealth-building journey so far. First, there's no way I could have known, a dozen years ago, that I would be cranking up my investing and retirement savings essentially at the very beginning of the longest bull run in U.S. stock market history: 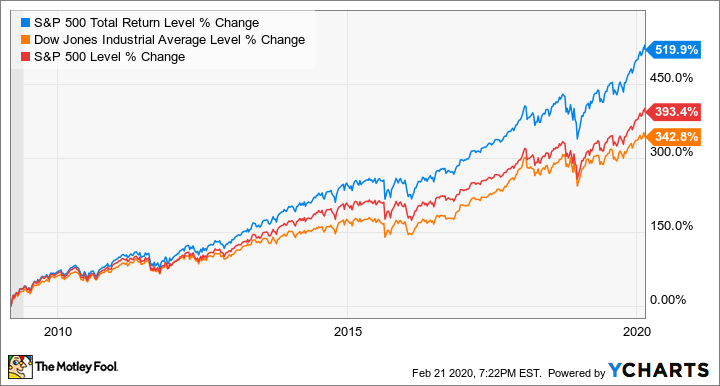 The reality is, an enormous portion of my net wealth is simply a product of good fortune and timing. If I had begun this journey during many other periods of time, I may have enjoyed only half the returns. I will say that a big portion of my wealth gains are a product of investing in stocks. Starting as a subscriber to Stock Advisor and Rule Breakers before becoming a contributor to The Motley Fool, my portfolio's gains are proof that it's possible to beat the market.

Moreover, I've also profited from the housing market. After getting burned and losing a house to foreclosure during the Great Recession, we were able to buy a small starter home seven years later, make some improvements, and then recently sell it for a 32% gain when we bought a bigger house. In Southern California, a 32% gain on real estate is substantial money; about 25% of our net worth is home equity that's largely from the gains on our prior home.

In addition, I have been incredibly fortunate in who I married. My wife and I have been fully aligned on our financial goals over the past dozen years, working in tandem to fully realize our plans. Moreover, she also earns a substantial income that plays a major role in growing our wealth.

The biggest lesson: Luck is nice, but it only compounds your actions

Reaching this milestone has proved humbling. The reality is, I know I can't take credit for a lot of the factors behind it. The facts are pretty clear: Luck -- or just favorable timing if you prefer -- has played a big part, along with a dose of good fortune by marrying well and stumbling into a career that pays well.

But with that said, the foundation was laid when my family made the decision to control our financial future. Sure, the market's run has supercharged my net wealth, but it wouldn't matter if not for the actions we have taken to invest and save as much as possible, and to continue doing for as long as possible.

Getting to millionaire status is nice, but mostly in a way that doesn't seem real. It doesn't change anything for our day-to-day lives. Most of the wealth is tied up in retirement accounts or in home equity. It's not there for us to spend right now, and it's also not enough to replace our income. Based on the 4% rule -- which says you can take 4% out of your retirement savings each year and have a sustainable nest egg -- $1 million is worth only $40,000 per year.

So we need to keep on saving. That's particularly true since I have a 3-year-old at home, and college isn't going to be any cheaper in 2035 than it is today.

So we will keep on investing, and keep on saving for the future. I'm not counting on another dozen years in this bull run, but then again, I wasn't the first dozen.

I'll leave you with what my wife said when I asked her how she felt after sharing the news with her: "Not that different. I'm still stressing over having to buy new shoes."