Please ensure Javascript is enabled for purposes of website accessibility
Log In Help Join The Motley Fool
Free Article Join Over 1 Million Premium Members And Get More In-Depth Stock Guidance and Research
By Matthew DiLallo - Feb 24, 2020 at 11:31AM

Enbridge (ENB 1.66%) and Enterprise Products Partners (EPD 0.15%) have treated dividend investors exceptionally well over the past couple of decades. The North American energy infrastructure giants have both increased their payouts for more than 20 consecutive years. Those trends should continue, since both companies have strong financial profiles and healthy growth prospects.

Either one would seem to be a good buy for income investors right now. However, since most income investors likely want to own only one energy company in their portfolio, here's a look at which is the best option to buy these days.

Any good analysis of two dividend stocks should start with a deep dive into their financial situations. Here's a closer look at the metrics that matter for these two energy giants:

As the table shows, both companies have strong numbers for the pipeline sector. While both companies produce very stable cash flow, Canadian oil pipeline giant Enbridge gets a higher percentage from predictable sources like fee-based contracts. Leading MLP Enterprise Products, on the other hand, has a slightly stronger balance sheet because it has a lower leverage ratio, though both ended the year with leverage right at the midpoint of their target range. Enterprise also has a bit lower dividend payout ratio, which is a surprise since it has a higher yield.

Either company, however, offers investors a low-risk income stream based on its financial profile. 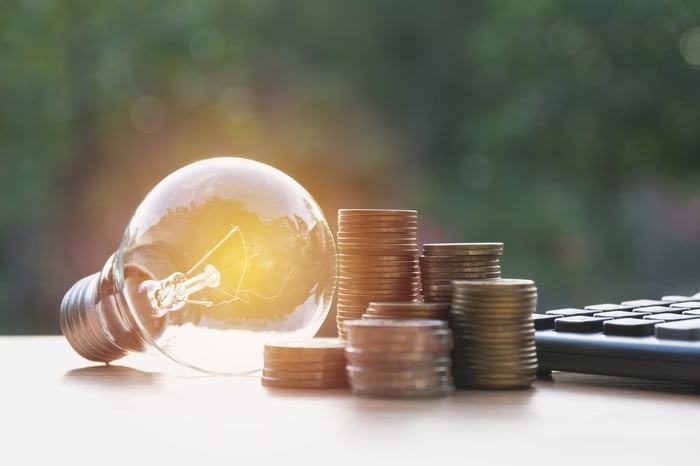 Enbridge ended last year with 11 billion Canadian dollars' ($8.3 billion) worth of commercially secured expansion projects, which should come online through 2022. That backlog supports Enbridge's view that it can grow its cash flow per share by about 2% this year and at a 5% to 7% annual rate beyond 2020. Overall, the company can self-fund between CA$5 billion and CA$6 billion ($3.8 billion to $4.5 billion) of growth projects per year with a combination of retained cash flow and new debt while keeping its leverage ratio within its 4.0 to 5.0 times target range.

Enterprise Products, meanwhile, has $7 billion of expansion projects under construction, which should come online through 2023. That backlog should enable the MLP to continue increasing its distribution at a modest quarterly rate while also providing it with the funds to opportunistically repurchase its units as part of its $2 billion buyback program.

In addition to the projects both companies have in the backlog, each one has several others in development. They recently teamed up on an offshore oil export terminal in Texas. Meanwhile, Enbridge recently bought full control of a pipeline development that would support an LNG export project and has several offshore wind farms in France under development. Enterprise, on the other hand, is working on several opportunities to expand its existing assets. As such, both companies appear as if they have plenty of fuel to keep growing their cash flow and high-yielding dividends in the coming years.

Despite the companies' similar financial profiles and growth prospects, their stock prices have gone in different directions over the past year. Enbridge's stock has rallied 14%, while units of Enterprise have declined by about 9%. Because of that, there's a widening gap between their valuations.

As a result of rallying in the past year, Enbridge currently trades at about 12 times its cash flow. Enterprise Products Partners, on the other hand, sells for less than nine times its cash flow. That discounted price is leading the company to allocate about 2% of its total cash flow to repurchase some of its dirt-cheap units this year.

Both Enbridge and Enterprise Products offer investors similarly solid financial profiles and growth prospects, which would make either one a low-risk option for income-seeking investors. However, Enterprise stands out as the better buy because it's so much cheaper than Enbridge. Because of that, it offers a higher yield and could generate greater total returns in the coming years.