Please ensure Javascript is enabled for purposes of website accessibility
Log In Help Join The Motley Fool
Free Article Join Over 1 Million Premium Members And Get More In-Depth Stock Guidance and Research
By Rich Duprey – Feb 25, 2020 at 10:14AM

The simultaneous upgrades to a rather mundane service suggest both have bigger plans in mind.

If you weren't looking for it, you might have missed the news that Apple (AAPL -2.18%) completed an upgrade to its mapping feature that makes it much more like Google Maps in functionality.

Yet it seems like curious timing, since Apple's upgrade comes at the same time the Alphabet (GOOG 2.35%) (GOOGL 2.28%) subsidiary also finished a big overhaul of its own mapping technology. Suddenly, getting you from point A to point B is a priority for both Apple and Google. 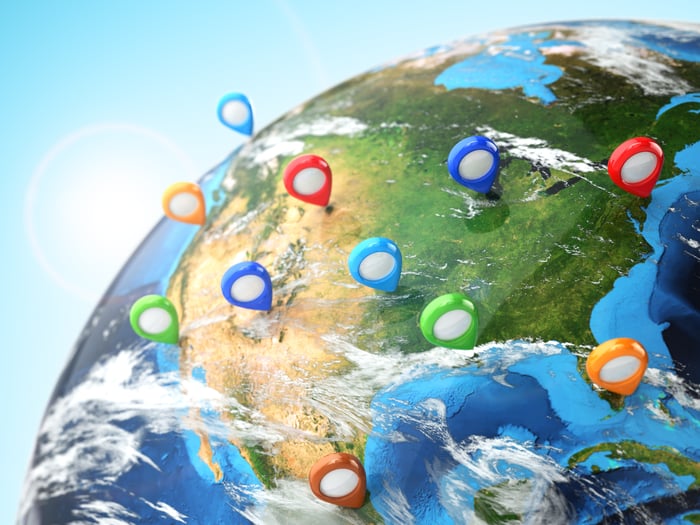 The road to self-discovery

Google's upgrades got far more media attention. Because they coincided with the 15th anniversary of Google Maps's debut, the redesign garnered a lot of attention. Users are now able to find and do things more easily, including discovering how to get to a destination.

While some of that functionality was already available in Google Maps, the redesign makes it easier to locate those capabilities. Five prominent buttons let users see options for Commute, Explore, Save, Contribute, and Updates, with the latter two allowing for greater user input as well as the options to add personal reviews or see places that are trending in the area.

The Apple Maps upgrade with the iOS 13 operating system makes for an experience much more similar to Google Maps, such as pedestrian navigation and street-level 3-D views, but it adds in its own extras so that Apple's maps are finally a worthy alternative to Google's.

Arguably one of its most defining features is its focus on privacy, an area that Apple has been using recently to differentiate its products from its rivals. Apple Maps usage is unrelated to your Apple ID, and search terms are associated with random identifiers.

Apple, which has long struggled to make a compelling map product, says it "required that we rebuild the map from the ground up to reimagine how Maps enhances people's lives ... all with privacy at its core."

The long way around

Getting lost when using a map can be more than an annoyance and an inconvenience: It costs businesses $6 billion a year, according to Mapillary, a sort of grassroots map-creation technology company.

It found that 78% of drivers have to drive over five extra miles per day because of incorrect maps, costing U.S. logistics companies $611 million annually. It also found that 71% of drivers spent more than four minutes per delivery looking for building numbers and delivery entrances. That's the equivalent of 13 wasted years every day.

A map upgrade doesn't occur overnight; it takes years to plan. Apple, for example, was reported to be working on its redesign as far back as two years ago, using its own in-house data rather than relying on third-party providers.

That may be the more surprising outcome of Apple's Maps overhaul, which suggests it relies less and less on TomTom for data.

It's likely both companies have grander schemes in mind behind their simultaneous attention to their mapping services.

Maps serve as a solid base of support for other ambitions Apple or Google may have, such as self-driving cars. Waymo, for instance, is Alphabet's autonomous vehicle project that some analysts estimate could be worth $100 billion all by itself, while Apple CEO Tim Cook has said in the past that self-driving cars are "the mother of all A.I. projects."

Apple may have other ideas as well, such as building out its own proprietary cloud services to unify projects such as Siri, Maps, iCloud, and others.

Although Google and Apple may clash across many fronts, and mapping may not seem the most consequential, the foundational support the feature provides to other services both tech giants offer suggest that this land grab may have more far-reaching ramifications than is immediately apparent -- which may be why both have undertaken major upgrades at the same time.

Suzanne Frey, an executive at Alphabet, is a member of The Motley Fool's board of directors. Rich Duprey has no position in any of the stocks mentioned. The Motley Fool owns shares of and recommends Alphabet (A and C shares) and Apple. The Motley Fool has a disclosure policy.