The $1.6 billion deal would release the pharmaceutical company from all opioid-related claims.

Shares of generic drugmaker Mallinckrodt (MNK) rose 14% to $4.78 Tuesday after the company reported it had reached an agreement in principle to settle opioid litigation brought against the company by thousands of plaintiffs and supported by 47 U.S. states and territories. The stock had fallen 19% on Monday after The Wall Street Journal reported that the company was preparing a chapter 11 bankruptcy filing covering its U.S. generics business.

On Tuesday, the company revealed that the proposed settlement involves a bankruptcy filing of its Specialty Generics subsidiary, and not of the parent company. Under the proposal, when Specialty Generics emerges from Chapter 11, plaintiffs would receive total cash payments of $1.6 billion and warrants to purchase 19.99% of Mallinckrodt, exercisable at $3.15 per share. Of that money, $300 million would be payable at the time of the subsidiary's emergence from bankruptcy, and the rest would be paid out over a period of eight years. The company expects that the court-supervised process will establish a trust to "offset the expense of helping to combat opioid addiction and providing support to communities impacted by opioid abuse." If the deal is accepted, Mallinckrodt and its subsidiaries will be released from all opioid-related claims against them. 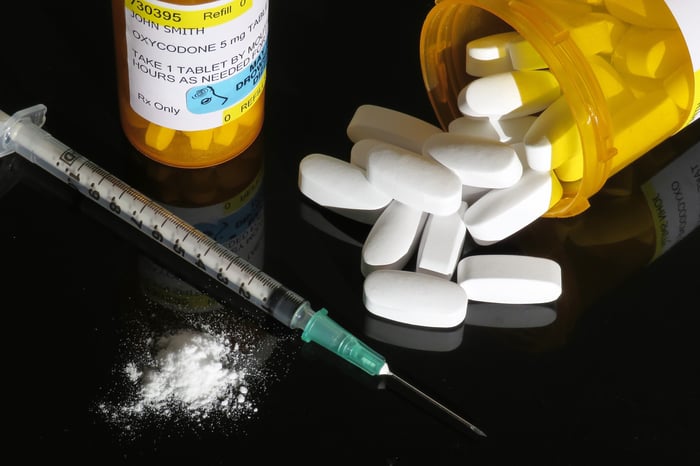 Mallinckrodt also announced an agreement with its lenders to provide it a new $800 million, four-year term loan. The company has $791 million in cash on its balance sheet and net debt of $4.6 billion.

The deal was good news for Mallinckrodt shareholders, especially after a proposed settlement with three larger companies was reportedly rejected by state attorneys general earlier this month.

The company also reported fourth-quarter earnings that beat expectations. Net sales fell 3.6% to $805 million, beating expectations for $773 million. Adjusted earnings per share, which don't include the charge for the opioid settlement agreement, rose 10% to $2.40, beating the $2.05 analyst consensus.