Please ensure Javascript is enabled for purposes of website accessibility
Log In Help Join The Motley Fool
Free Article Join Over 1 Million Premium Members And Get More In-Depth Stock Guidance and Research
By Matthew DiLallo - Feb 25, 2020 at 11:48AM

ONEOK expects significant earnings growth over the next two years, giving it plenty of room to keep growing its 5%-yielding dividend.

ONEOK (OKE -0.25%) has been increasing its dividend at a fast pace over the past few years. It has raised its payout for 11 straight quarters, boosting it 52% during that time frame, including 9% over the last year. That has helped push the company's yield up above 5%.

Judging from the pipeline giant's fourth-quarter earnings results, that growth appears poised to continue. Here's a look at the numbers ONEOK reported, as well as what it sees ahead.

A look at ONEOK's fourth-quarter results

ONEOK's earnings and cash flow both increased by around 5% during the fourth quarter. That pushed the company's full-year adjusted EBITDA up to $2.58 billion, a 5% increase from 2018's level, and within its guidance range of $2.56 billion to $2.64 billion. Distributable cash flow (DCF), meanwhile, rose 7% year over year to $2.02 billion, which was around the midpoint of its estimated range of $1.96 billion to $2.08 billion. That gave the company enough money to comfortably cover its steadily rising dividend.

All three of ONEOK's operating segments contributed to its solid finish in 2019:

Earnings in the natural gas liquids (NGL) segment rose 7.6% year over year. The primary drivers were higher volumes across several of the company's operating regions and increased rates on its assets in the Permian Basin. Those factors helped offset headwinds from higher costs.

Natural gas gathering and processing earnings increased by 8% year over year. Volume growth was the driving factor, mainly from its assets in North Dakota's Williston Basin. That more than offset the impact of lower natural gas prices.

Earnings from ONEOK's natural gas pipelines improved by about 1% during the fourth quarter. Pushing earnings higher were some recently completed expansion projects, which more than offset higher operating costs. 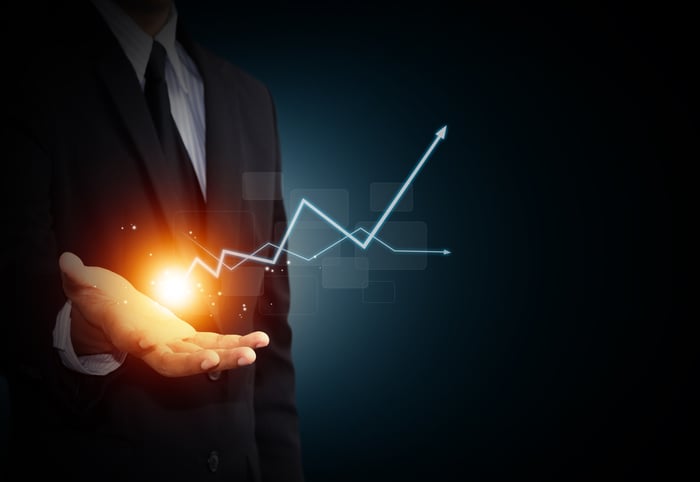 ONEOK expects its growth rate to accelerate in 2020. The company foresees its adjusted EBITDA surging 25% at the midpoint of its guidance range of $3.1 billion to $3.35 billion. DCF, meanwhile, should rise to between $2.245 billion and $2.505 billion, up about 18% year over year. Fueling that growth will be the recent and upcoming completion of several expansion projects. Notable ones include the Elk Creek Pipeline, which ONEOK finished in December, and the Arbuckle II Pipeline, which should start up in the first quarter.

ONEOK has several more expansion projects slated to start service in 2021, including three additional expansions that it recently secured. Those projects include:

These three new additions to its backlog, when combined with the other projects it already has under construction, lead ONEOK to believe it will grow its EBITDA by an additional 20% in 2021 from this year's midpoint.

That fast-paced earnings growth should enable ONEOK to quickly get its balance sheet back on solid ground. It ended 2019 with debt at 4.9 times EBITDA, which is a bit above its target of 4 times. However, leverage should fall back toward that goal by the end of this year or early 2021. Furthermore, its quickly rising cash flow should allow the company to keep increasing its dividend.

Everything is heading in the right direction

ONEOK is about to stomp on the gas this year, thanks to the completion of several expansion projects. And with a growing slate of additional projects, ONEOK's earnings should keep growing at an accelerated pace in 2021. That will enable the pipeline giant to quickly reduce the debt portion on its balance sheet while at the same time providing its investors with more income, making it an ideal dividend stock.