A judge ordered the halt due to a lawsuit from a disgruntled dispensary applicant.

Arkansas' licensing program for medical marijuana dispensaries has come to a screeching halt -- at least for now. A legal dispute has led a judge to order a suspension of the activity by the state.

The decision, by Pulaski Country Circuit Judge Wendell Griffen, arises from a lawsuit brought against the Arkansas Medical Marijuana Commission and two related state agencies. In the suit, privately owned dispensary operator Medicanna alleged that a less qualified peer, Nature's Herbs and Wellness, received a license instead of them. 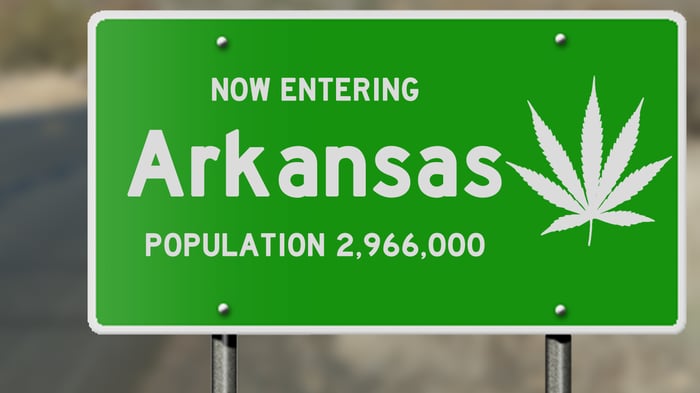 In ordering a halt to the state's licensing program, Griffen wrote that there was "substantial likelihood" that the Commission did not comply with proper administrative procedures mandated by the state.

Neither the Commission nor its parent agency, the Alcoholic Beverage Control, has commented officially on the matter.

Medicanna is based in the city of Pine Bluff, roughly 45 miles south of the state's largest and capital city, Little Rock.

Griffen has set a hearing for Tuesday, March 3, on a possible preliminary injunction against the state, which would keep the suspension in force.

Although Arkansas voters opted to legalize medical marijuana in a 2016 ballot initiative and business has been brisk, the industry has not had a quick rollout in the state -- its first dispensaries only opened their doors in the middle of last year.

At the moment, the state is home to 32 dispensaries. Publicly traded cannabis companies are rather thin on the ground, although Grassroots -- apparently soon to be folded into would-be acquirer Curaleaf (CURLF -2.60%) -- has one. Neither Grassroots nor Curaleaf has yet weighed in on the Arkansas licensing suspension, or the Medicanna controversy.

Curaleaf's stock dropped by nearly 7% in trading on Wednesday.