Please ensure Javascript is enabled for purposes of website accessibility
Log In Help Join The Motley Fool
Free Article Join Over 1 Million Premium Members And Get More In-Depth Stock Guidance and Research
By Amar Khatri – Updated Feb 27, 2020 at 11:32AM

The gene therapy maker's novel medicine has the potential to take over a highly competitive market and offer growth opportunities for investors.

Editor's Note: This article has been updated to clarify that BioMarin's gene therapy does not treat both forms of hemophilia. It only treats adults with hemophilia A.

Gene therapy maker BioMarin Pharmaceuticals (BMRN 2.18%) has seen impressive growth recently, with the stock up more than 46% since October.

The 22-year-old company focuses on developing innovative therapies for rare genetic diseases, addressing conditions such as hemophilia, phenylketonuria (PKU), and a few others affecting children.

Most recently, BioMarin has been working on a novel therapy that promises to give its competitors, such as Roche (RHHBY -1.63%) and Sangamo Therapeutics (SGMO 0.20%), a run for their money in this space. A recent update on BioMarin's manufacturing plans indicates that the company plans to leave no room for its competitors to grow. 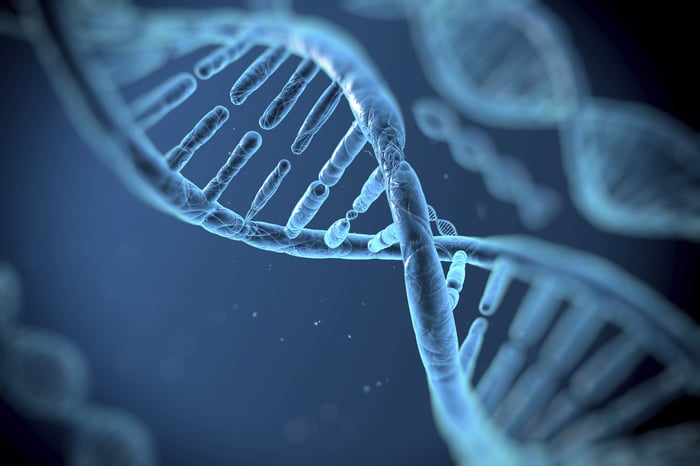 Valoctocogene roxaparvovec (Valrox), BioMarin's novel gene therapy for hemophilia, will enjoy a first-mover advantage when it reaches the market. Hemophilia is a rare, genetic bleeding disorder that affects a small population of patients around the world. There are two forms of the disease, A (which is more common) and B; approximately 20,000 individuals are affected in the United States and 400,000 worldwide. Both forms of hemophilia result in a missing or deficient protein required for blood clotting.

Market researchers at iHealthcareAnalyst project the hemophilia market to be valued at $16.5 billion by 2027, a compound annual growth rate (CAGR) of 5.5% from today, thanks to the arrival of some novel treatments. Because it affects more people, hemophilia A accounts for the largest share of revenue in the market, and current treatments have not changed significantly in recent years.

The potential for a novel drug can reshape the landscape, especially if it offers significant new benefits. iHealthcareAnalyst noted a strong desire for hemophilia therapies that can be taken less often. Currently, patients on prophylaxis are advised to receive three treatments per week, which becomes a financial burden on patients and other payers.

BioMarin's gene therapy can change the game by offering long-lasting effects after one use. Current, traditional hemophilia A (hem A) treatments such as Roche's Hemlibra and blood clotting factor replacement therapy require multiple doses to reduce bleeding episodes.

In a manufacturing update, BioMarin noted that its facility, which formerly produced about 4,000 treatments a year, has undergone improvements that now make it able to produce 10,000. That gives it the potential to treat roughly the entire existing U.S. population of hem A patients within two years. This would thwart competitors with novel drugs slated to arrive after 2021, leaving them with limited growth opportunities.

Valrox is unique thanks to two designations from the U.S. Food and Drug Administration (FDA) and European Medicines Agency (EMA); it is both a "breakthrough" therapy and an "orphan" drug, allowing for an expedited approval process and a longer patent protection (and thus continued revenue) stream. The EMA also validated the Marketing Authorization Application (MAA) for the drug, meaning it will undergo accelerated assessment and reach the market more quickly.

On Feb. 20, Valrox was accepted for priority review by the FDA for the indication of adults with hemophilia A. If approved, it would become the first gene therapy to treat any form of hemophilia. The FDA also gave premarket approval (PMA) to a diagnostic test that complements the treatment. BioMarin's gene therapy shows lots of promise, so what competitive advantages does it have over rivals such as Roche and Sangamo Therapeutics?

The gene therapy market is highly competitive, and the FDA's priority review will allow Valrox to be the first medication of its type to reach the market of adults with hemophilia A. This offers a first-mover advantage over Roche and Sangamo.

Enrollment for the Valrox clinical trial was much larger than for competitors' trials, which may imply that this therapy could prove superior. Roche's gene therapy studies are moving more slowly; this is also true at Sangamo, which recently reported positive results from the first two patients in its phase 1/2 clinical trial.

BioMarin CEO Jean-Jacques Bienaime noted in an interview at the J.P. Morgan Healthcare Conference earlier this year that healthcare payers in the United States would be comfortable paying between $2 million and $3 million for each treatment. He also noted that the average cost for each current hem A treatment is roughly $700,000, which after four years adds up to $2.8 million. Therefore, Valrox could provide benefits to both patients, by reducing the amount of therapy needed, and healthcare payers.

BioMarin's novel drug therapy to treat adults with hemophilia A, and its capacity for long-lasting effects with one administration, shows how economical and valuable this therapy can be across the healthcare system. It's poised to take market share after its approval and could be a game-changer for the company and its investors.

BioMarin looks strong against larger and smaller players alike, thanks to its first-mover advantages and plans for an expansive production facility that should help it take over the hemophilia A market. Management has some optimistic forecasts for 2020 revenue -- they're hoping to hit $2 billion with the launch of Volrax, with a revenue target of $8 billion to $10 billion over 10 years. As Volrax continues to gain traction, investors interested in biotech will want to pay attention.