Please ensure Javascript is enabled for purposes of website accessibility
Log In Help Join The Motley Fool
Free Article Join Over 1 Million Premium Members And Get More In-Depth Stock Guidance and Research
By Daniel B. Kline – Feb 26, 2020 at 9:49AM

The company has struggled to give consumers what they want.

The company has thrown in the towel on its first attempt at getting the cheesy topping right. That effort was not the overwhelming success the company had hoped for, partially because the chain does not use the artificial ingredients that rivals use to make their queso creamy.

Now, Chipotle is trying again -- but it's still not compromising its standards. 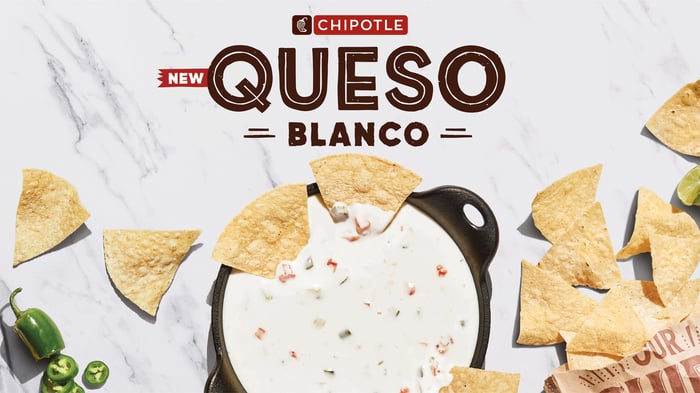 Chipotle is replacing its first attempt at queso with the new Queso Blanco beginning on Feb. 27. The new attempt is a completely new recipe "including aged Monterey Jack, white cheddar, and serrano, poblano and chipotle peppers, to create a smooth queso with just the right amount of spicy kick," the company said in a press release. The new Queso Blanco has no artificial flavors, colors or preservatives.

"Feedback on Queso Blanco in the test markets exceeded our expectations and it quickly became clear that we needed to give all of our guests access to this delicious queso," said Chipotle Chief Marketing Officer Chris Brandt in the press release. "Our culinary team perfected a recipe of real, responsibly sourced ingredients, helping to advance our mission of Cultivating a Better World."

Consumers largely did not like the Mexican chain's first attempt at queso. It made sense to make a change to try to get the recipe right.

It's also worth noting that the new cheese sauce went through Chipotle's new stage-gate process which lets the restaurant chain test new menu items extensively. The chain tested Queso Blanco in 52 locations across Dallas, Detroit, and San Diego, in 2019. That may mean that this queso will be better received than the company's earlier effort.