Please ensure Javascript is enabled for purposes of website accessibility
Log In Help Join The Motley Fool
Free Article Join Over 1 Million Premium Members And Get More In-Depth Stock Guidance and Research
By John Ballard – Feb 26, 2020 at 8:30AM

Paying attention to what young people are into, and investing accordingly, can pay off with big rewards.

Hasbro (HAS 0.61%) started in the 1920s and spent those early years making textiles and pencils. It didn't make its first toy until Mr. Potato Head in the 1950s. By the time Hasbro had its initial public offering (IPO) in 1968, the brand was famous for G.I. Joe, which made up two-thirds of the company's sales at the time.

Even though the stock market experienced a lengthy bear market in the first decade after Hasbro's IPO, an investment in the stock would have had a big effect on your financial situation today.

An exercise in patience

On Oct. 10, 1968, the first shares were sold to the public at a pre-split price of $15. The stock has split eight times, with a 10% stock dividend in 1981. Some of the splits were at odd ratios, like 3-for-2, which means you would have received three shares for every two held. After all the splits, one share would have turned into 62.65 shares today.

However, investors would have needed to demonstrate great patience to endure the early years. This chart's data only goes back to 1972, but it illustrates the effect that the crushing bear market had on many investors in the early- to mid-70s. 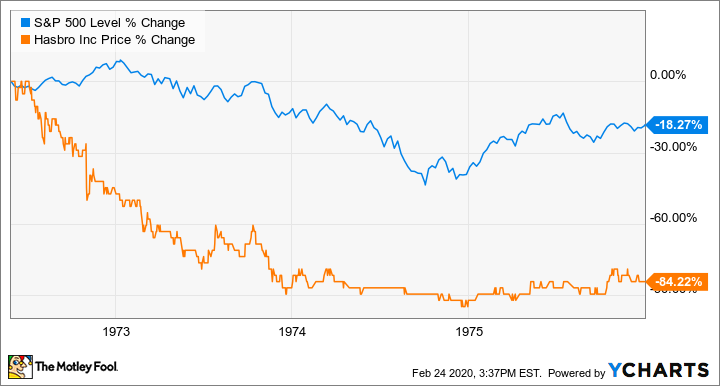 It would be very difficult to believe that a stock in your portfolio that was down 84% would go on to make you $3.8 million and pay you a six-figure income in dividends.

That's right. Hasbro started paying a dividend in 1977 and has paid a dividend every year since 1981. The current quarterly payout is $0.68 a share, so the 41,765 shares you would currently own would be dishing out $113,600 to your brokerage account every year.

The global demand for toys has been soft in recent years, as today's youth spend more time with digital experiences. But that hasn't stopped Hasbro.

The shares have still managed to deliver a modest 48% return over the last five years. The company recently had to deal with not only shifting consumer preferences but also the bankruptcy of Toys "R" Us, which left a void in Hasbro's distribution channel.

Management is currently focused on integrating the acquisition of Entertainment One, which enhances Hasbro's storytelling capabilities in music, film, and TV. These are some of the areas where management is investing more and more to connect with the new generation.

Hasbro has enough opportunities in games, films, and TV to remain at least a modest-performing growth stock. It should be generating plenty of profit and paying a rising dividend over time.

But the short term could be a little bumpy. The shares have stumbled to start 2020 over a soft outlook for the year ahead. But value investors may find the stock's modest valuation and above-average dividend yield of 3.02% to be attractive.