The two drinks names have come together to address one of the coffee market's hottest trends.

Beverage giant PepsiCo (PEP 1.34%) and coffeehouse chain Starbucks (SBUX -0.95%) have teamed up to develop a new ready-to-drink product for grocers, which until now has only been available in Starbucks' coffee shops.

Starbucks announced on Tuesday that its Starbucks Nitro Cold Brew would now be made available in a pre-packaged format consumers can purchase and enjoy anywhere, anytime. 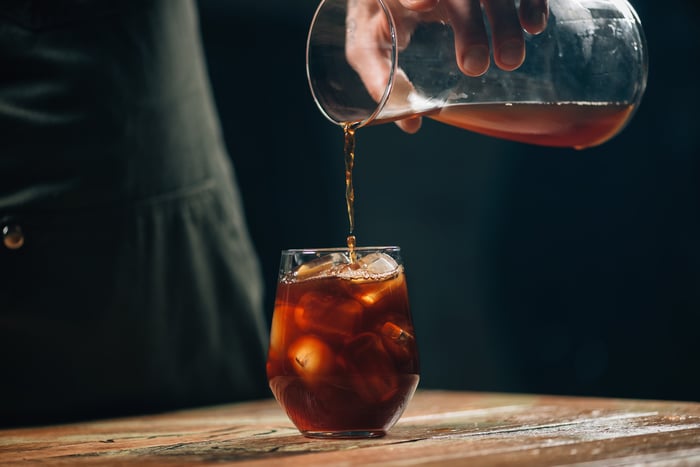 Cold brew coffee is not a new development, nor is nitro cold brew. It's remained a small piece of the coffee market, however, largely limited to niche coffee houses due to the high cost of equipment needed to infuse coffee with nitrogen... which makes the drink smoother and thicker.

Starbucks first experimented with nitro cold brew in 2015, and finally introduced the drink to consumers in all of its stores last year. That introduction has fueled a nitro cold brew craze that's growing at an annualized pace on the order of 40%. Ready-to-drink options are available already, but none of those brands enjoy the marketing and distribution firepower that Starbucks and PepsiCo have at their disposal. They're jointly addressing a ready-to-drink coffee market worth more than $2 billion per year in North America, which includes a relatively small but faster-growing ready-to-drink nitro cold brew market, and intersects with the bigger on-premise nitro coffee market.