Please ensure Javascript is enabled for purposes of website accessibility
Log In Help Join The Motley Fool
Free Article Join Over 1 Million Premium Members And Get More In-Depth Stock Guidance and Research
By Nicholas Rossolillo - Feb 26, 2020 at 7:00AM

Think long and hard about your investing strategy before buying this high-flying space stock.

After tripling in value since the start of 2020, Virgin Galactic's (SPCE -4.61%) full-year 2019 report card and first earnings report as a public company has become one of the more highly anticipated quarterly updates. Released Tuesday afternoon, the numbers were ugly but fully expected.

For full-year 2019, Virgin Galactic's earnings before interest, tax, depreciation, and amortization were $203.8 million, much higher than the $132.1 million in 2018 -- although $14.6 million of that was expenses related to the company going public in October 2019. Total revenue for the year? $3.78 million. 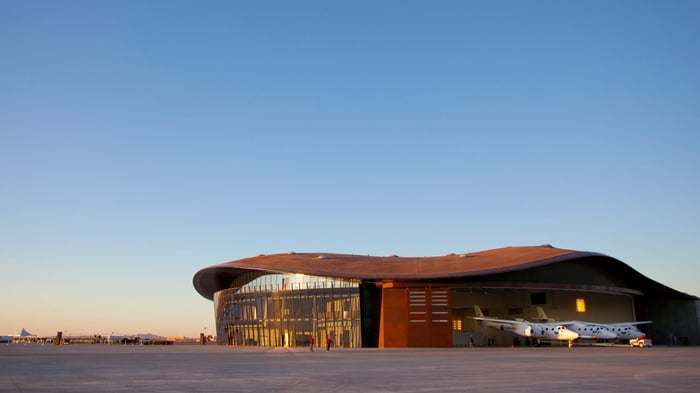 One weird stock, space or otherwise

To be fair, this is a start-up company, so it's expected that revenue is close to nil. However, perhaps telling of some investors' risk appetite at the moment -- or maybe just pure hype surrounding the commercial space economy -- one keenly anticipated metric that was being watched was the number of registrations of interest in taking a voyage to space aboard a Virgin Galactic ship.

That's at least something, as it indicates there are plenty of individuals out there ready to jettison $250,000 for a seat to the outer reaches of the atmosphere. At those prices (and assuming a gross margin of 40% like what was run on revenue in the fourth quarter), Virgin would need to convert just under 10% of those applications of interest to actual ticket sales to cover its losses.

But bear in mind that these aren't sales yet, just interested parties. And that's what makes this such a strange stock. It isn't in growth mode -- at least not yet. Investors have been running up share prices on the mere promise of revenue growth if all goes as planned with Virgin's maiden voyage with paying astronauts later this year.

What comes next is anyone's guess

Virgin did launch its "One Small Step" initiative the same day as the fourth-quarter earnings release, allowing registrants to pay a $1,000 refundable deposit to jump to the front of the line when it comes time to make an actual ticket purchase.

That could help generate some much-needed sales to help offset what is sure to be another year of steep losses in 2020. At the end of 2019, the company had $480 million in cash and equivalents, but sooner rather than later a round of funding will be needed.

That funding could be in the form of debt, but my money's on a secondary issuance of stock to take advantage of skyrocketing prices. In the meantime, preparations are still needed. Virgin already has its commercial flight license to conduct test flights, but it's still going through the final process of testing to provide data to the Federal Aviation Administration. So far, it's cleared 20 of the 29 steps needed to get commercial flight clearance.

Thus, as exciting as commercial space travel may be, investors should think hard before buying. If Virgin Galactic can execute on a number of very challenging mission-critical steps, it could eventually be a major disruptor to the travel industry. Along the way, it's going to be a very wild ride.