Please ensure Javascript is enabled for purposes of website accessibility
Log In Help Join The Motley Fool
Free Article Join Over 1 Million Premium Members And Get More In-Depth Stock Guidance and Research
By Keith Speights - Feb 26, 2020 at 7:34AM

There are a few potential backup plans. But all of them have drawbacks.

A deal isn't done until the ink dries on the paper. And for AbbVie's (ABBV 1.28%) pending acquisition of Allergan (AGN), the ink hasn't dried yet.

AbbVie first announced plans to buy Allergan in June 2019. CEO Rick Gonzalez stated in the company's Q4 conference call earlier this month that the deal was on track to close in the first quarter of 2020.

But now there's a threat that could prevent the transaction from receiving regulatory clearance from the U.S. Federal Trade Commission (FTC). What happens for AbbVie if its Allergan buyout is blocked? 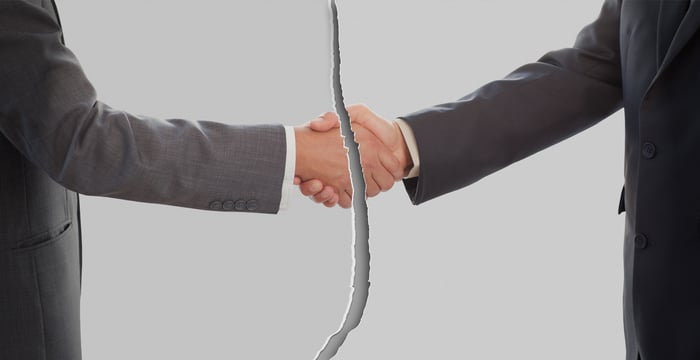 A coalition of consumer groups and trade unions representing over 10 millions subscribers and members oppose AbbVie's takeover of Allergan. These organizations sent a letter to the director of the FTC's Bureau of Competition on Feb. 18, stating that Allergan's sale of brazikumab to AstraZeneca isn't enough to address the anti-competitive impact of the acquisition.

The consumer groups and unions are also worried that AbbVie will gain increased bargaining leverage with payers by picking up Allergan's lineup of drugs. Allergan claims current blockbuster products including Botox and a fast-rising star in antipsychotic drug Vraylar.

What would AbbVie's backup plan be if the FTC blocks its acquisition of Allergan? For one thing, the company wouldn't probably walk away from the deal without putting up a fight. It's spent too much time and money trying to make the acquisition happen to immediately throw in the towel.

If, however, the transaction does fall apart, it seems likely that AbbVie would go back to the drawing board to identify other potential transformative acquisitions. The problem is that if the FTC scuttles the Allergan buyout, it would probably be opposed to nearly any major deal that AbbVie might want to make.

One possible candidate that would be an intriguing pick for AbbVie is Vertex Pharmaceuticals (VRTX 3.02%). The only significant overlap between the two companies' pipelines and product lineups is in cystic fibrosis (CF). But AbbVie's CF drugs are only in early-stage development, while Vertex claims four FDA-approved CF drugs.

Vertex and Allergan have similar market caps. However, the price tag for AbbVie to acquire Vertex would probably have to be well above what it plans to pay for Allergan because of Vertex's strong growth prospects. It's also doubtful that Vertex would be interested in an acquisition at this point.

Another potential plan B strategy for AbbVie would be to go with the "string-of-pearls" approach and scoop up multiple smaller biotech stocks. The problem with this, though, is that AbbVie is looking for reliable revenue to reduce its dependence on Humira. A string-of-pearls shopping spree wouldn't likely achieve the big drugmaker's objective.

AbbVie could also go back to its roots and acquire a medical device maker instead of a biopharmaceutical company. Before it was a stand-alone company, AbbVie was part of Abbott Labs, which ranks as one of the biggest medical device makers in the world. The chances that AbbVie would take this course of action, though, are probably really low.

The most likely scenario of all for AbbVie is that it doesn't have to find a plan B at all. AbbVie has already obtained a green light from the European Union for its buyout of Allergan. Allergan sold Zenpep in addition to brazikumab to grease the wheels for the EU's blessing. It also sold pancreatic enzyme Viokace as a sweetener to gain FTC approval.

It's still possible that the FTC could block AbbVie's acquisition of Allergan. However, any arguments that the deal will significantly boost the company's competitive position in immunology or oncology don't appear to be compelling ones. Look for the ink to dry on the $63 billion transaction sooner rather than later.