Please ensure Javascript is enabled for purposes of website accessibility
Log In Help Join The Motley Fool
Free Article Join Over 1 Million Premium Members And Get More In-Depth Stock Guidance and Research
By James Brumley - Feb 27, 2020 at 11:23AM

Its NBCUniversal division is building an ad-management and measurement platform that combines streaming and linear TV.

The cable television business faces a growing problem. Yes, it's fighting a wave of cord-cutting that doesn't look like it's going to slow down anytime soon, but that's not the most noteworthy of its challenges. More pressing -- though more subtle -- is the cable industry's growing struggle to sell highly targeted ad space to advertisers who are trying to reach increasingly distracted consumers. Streaming services that rely on advertising revenue may be doing even worse when it comes to connecting advertisers with the right consumers.

It's an undertow particularly concerning for Comcast (CMCSA 0.51%) shareholders. Its NBCUniversal division not only operates in the conventional cable television space, but it's entering the streaming fray with a fully ad-supported version of Peacock. This will be the first major network name to stand up to commercial-free rivals like Netflix with a streaming alternative whose main tier is totally monetized with television commercials. For the gambit to pay off, it would have to give advertisers something they've never had before.

Comcast's NBCUniversal arm is doing just that, unveiling an impressive upgrade to its ad sales platform simply called "One Platform" that gives advertisers everything they could want in an ad-management and measuring interface. 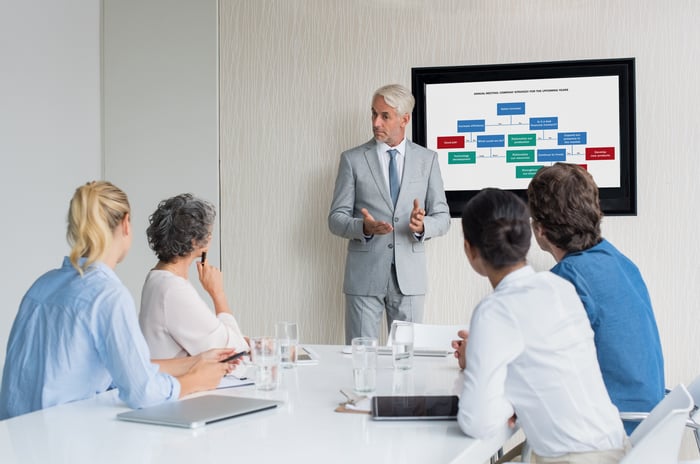 How One Platform is an improvement

If the premise rings a bell, it may be because yours truly broached the idea earlier this month by suggesting even though advertisers were ready to plug into streaming video, streaming service providers didn't seem quite ready to deliver the kind of advertising and measuring options advertisers now expect.

It seems I underestimated just how much progress Comcast has made on this front. Tuesday's presentation of the new and improved One Platform described it as a way to give marketers "the power to reach all audiences everywhere they are across the full NBCUniversal ecosystem, and enables every impression to be data-informed."

More importantly, it ticks off the most important checkboxes at a time when the cable business is rapidly changing.

According to a press release, NBCUniversal will expand CFlight cross-platform impression measurement to include over-the-top television (OTT) co-viewing, out-of-home measurement, and short-form video. The release said:

Simply put, Comcast clearly knows it has to be ready to give marketers everything they should be able to get in this day and age of television technology.

There was a time not too long ago when cable companies and networks had a good feel for who was watching what programs and could pass that data along to advertisers, who more or less knew what sort of response to an ad could be expected.

Unfortunately, that's not really true anymore, and mobility is a key cause of a growing struggle to measure ad effectiveness. A recent study commissioned by Facebook found that 94% of television viewers have a mobile phone in their hand while they're watching. That device might make it easier for a consumer to learn more about a product featured with a television commercial, but it could just as easily mean consumers are doing something with their phones while a commercial is playing and miss an ad altogether. One Platform appears to offer a way to let advertisers know when that's happening.

Perhaps more importantly, the planned technology updates to One Platform will give marketers more granular data about their traditional cable television campaigns, but the updates will also give them the detailed demographic data and ad-management/measurement capabilities that have been mostly been missing with streaming video so far.

As Deloitte's most recent Digital Media Trends Survey bluntly noted, "Long, frequent, repetitive, and irrelevant advertising diminishes the user experience, and the growth of streaming options outside the ad ecosystem has benefited from this."

To be clear, video entertainment middlemen are working to move past these hurdles. Roku (ROKU -2.22%) has partnered with Innovid, for example, to help its advertisers measure and capitalize on demographic data. It and its rivals face a steep learning curve, though, and even then, those solutions are only half of what marketers need.

While their numbers continue to dwindle, there are still more than 70 million households that subscribe to a conventional cable TV service, and they're still the underpinnings of more than $40 billion worth of ad revenue per year. Conversely, the ad-supported video-on-demand ad market may only be worth around $20 billion per year now, but Informa Tech forecasts that figure will swell to $27 billion by 2023.

A savvy company will understand it has to be able to deliver on both fronts and, ideally, connect the two. NBCUniversal's latest plans for One Platform suggest it's doing just that.