2020 is the year that Ford Motor Company (F 3.14%) is supposedly going to stop selling cars in the United States. You should have known that already, though, as my Foolish colleagues John Rosevear and Adam Levine-Weinberg commented on the news extensively two years ago. Here's something you probably have not heard:

Ford -- maker of America's top-selling large pickup truck -- is trying to break into the scooter business in Europe. 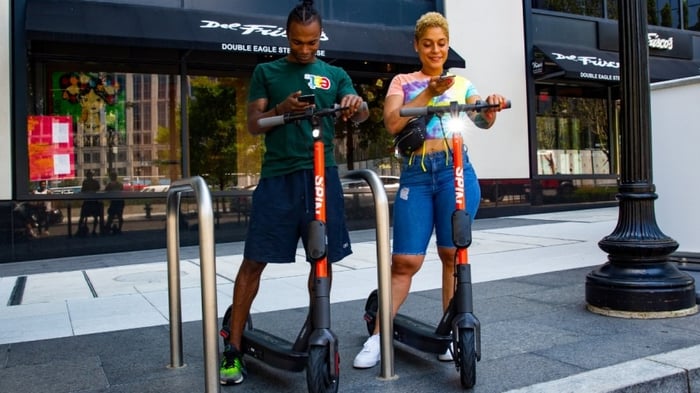 Techcrunch reported the story this morning. Leveraging its $100 million late-2018 purchase of San Francisco-based scooter-sharing company Spin, which has grown its rideshare more than 1,100% since Ford bought it, Ford is moving to expand its scooter rental business outside U.S. borders.

This spring, Spin, which currently rents scooters in 62 U.S. cities, will make its first move abroad when it launches in Cologne, Germany. In subsequent months, Ford hopes to launch Spin in additional German cities, as well as in France and the United Kingdom.

Spin has already announced the introduction of its next-generation (its third) scooter to support the launches. In addition to a larger frame, a wider and longer platform, bigger tires, and better shock absorption, the third-generation Spin scooter will also offer "significantly extended battery life, enabling each scooter to ride up to 37.5 miles at full charge," according to a Ford press release.

That's not just a selling point for the scooter. It also means Spin should be able to keep more scooters available for use (and generating revenue for Ford) longer between charges. While Spin is only a small drop in Ford's $155.9 billion revenue stream, it's aiming to grow bigger, and these technical improvements should help.