Please ensure Javascript is enabled for purposes of website accessibility
Log In Help Join The Motley Fool
Free Article Join Over 1 Million Premium Members And Get More In-Depth Stock Guidance and Research
By Donna Fuscaldo – Feb 27, 2020 at 8:45AM

Google Cloud has ambitions to be the first- or second-place player in years to come. To get there, it's turning to acquisitions.

With Alphabet's (GOOG -0.19%) (GOOGL -0.21%) core advertising business slowing, the internet search giant has turned its attention to the cloud computing market -- and for good reason.

That area of the market has been enjoying double-digit growth with more of the same projected in the coming years. According to market research firm Gartner, the worldwide cloud computing market will reach $331.2 billion by 2022, up from $249.8 billion in 2020.

As it stands, Amazon's (AMZN -0.12%) cloud unit Amazon Web Services (AWS) is the industry leader, but Microsoft (MSFT 0.13%) is chipping away at that dominance with Azure.

Google has ambitions to be the first- or second-place cloud provider in the coming years and hopes to capture $25 billion in yearly sales. To meet that end, it has embarked on a cloud computing overhaul that includes a buying spree. 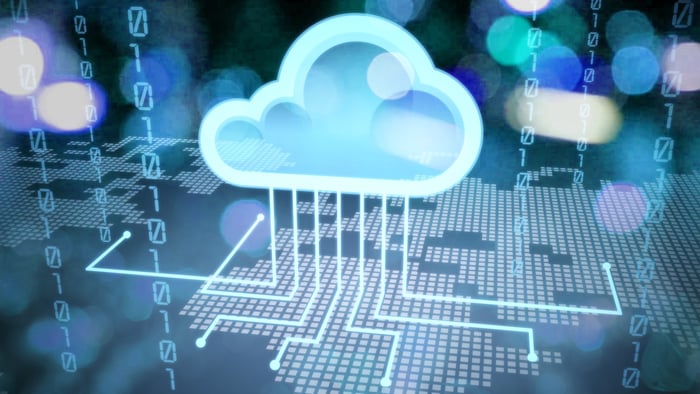 Google Cloud wants to be among the leaders

The buying spree is part of Google Cloud head Thomas Kurian's strategy to grow the unit into a serious threat to AWS and Azure. In addition to acquisitions, Kurian is restructuring the unit, including reducing the headcount. Earlier this month, Google Cloud confirmed it laid off a small number of workers, largely as part of a restructuring of how it approaches international markets.

The moves come a year after Kurian took over the reins of Google Cloud with a stated mission to grow it into a serious contender to Amazon and Microsoft. To do that, Kurian said at a recent Goldman Sachs conference that Google is going after the retail, healthcare, financial services, media and entertainment, and industrial and manufacturing markets. The selling point for using Google Cloud is that businesses get access to its artificial intelligence and data analysis expertise, and don't have to worry about sharing data with a rival.

To stand out from its competitors, Google Cloud is positioning itself as a software company, which it is betting will attract larger customers and thus more revenue. It's also reportedly setting its sights on China, which is attractive because of its size.

As it stands, Google has an uphill battle given its 6% market share at the end of the fourth quarter. That pales in comparison to AWS, which had market share of 32.4% as of the end of 2019. Microsoft ended the year in second place, controlling 17.6% of the market.

But with demand for cloud services projected to see double-digit yearly growth,  it does provide a lot of opportunities for Google to enter the fray and succeed. Sure, it's a latecomer, but there's a lot of business that remains to be had. It can also exploit its rivals' flaws to provide a real alternative.

Is cloud the next bastion of growth?

Focusing on the cloud market also provides Alphabet with a way to drive growth, as advertising revenue begins to slow. The stock suffered a big hit last spring after Alphabet reported slowing advertising sales growth, and fell more in the third quarter of 2019 after missing Wall Street estimates. The losses in the share price have been recouped, and then some, but there's still the lingering concern about Google's growth.

It's one of the reasons Google disclosed the financial performance of Google Cloud and YouTube for the first time in its fourth-quarter earnings report. Google Cloud raked in revenue of $8.92 billion for the year, up 53% from $5.84 billion a year earlier. The unit ended 2019 with a more than $10 billion revenue run.

To put it in perspective, AWS reported $35 billion in revenue for all of 2019.  YouTube reported revenue of $15 billion for 2019, accounting for about 10% of Alphabet's overall revenue.

Google Cloud may not be a huge revenue generator today, but it could be in the future. One only has to look at Microsoft's recent resurgence for evidence. It was written off as a technology relic, only to reinvent itself as a cloud leader.

That could happen with Google Cloud, potentially providing a new driver of growth for the entire business and its stock.