Please ensure Javascript is enabled for purposes of website accessibility
Log In Help Join The Motley Fool
Free Article Join Over 1 Million Premium Members And Get More In-Depth Stock Guidance and Research
By Rhian Hunt - Feb 27, 2020 at 7:49AM

Bloomin’s current management will continue directing its strategies for the foreseeable future.

Bloomin' Brands (BLMN -3.30%), owner of restaurant brands Outback Steakhouse and Carrabba's Italian Grill along with several lesser lights, recently enjoyed a stock value boost after announcing a plan to sell itself. Now, just a few weeks later, CEO David Deno has stated a sale of the company looks unlikely. However, despite the flip-flop, Bloomin' seemingly came up smelling like roses again to people investing in restaurant stocks, thanks to favorable metrics in Bloomin's Q4 earnings report, including a blossoming partnership with DoorDash.

Investors signaled their approval of a major change in Bloomin's strategic direction and even ownership back in 2019. First, Bloomin's share price increased sharply in August 2019 when activist investment firm JANA Partners announced that it would seek more seats on the company's board. JANA is noted for gaining control of struggling companies in this way, streamlining them into profitability, then selling them. It did precisely this in 2017 with Whole Foods, assuming effective direction of the enterprise and steering it into an acquisition by Amazon. Bloomin's stock surged again in November when its Q3 earnings report declared an intention to put itself up for sale.

Now, just a single quarter later, David Deno used the Bloomin' Brands Q4 earnings call to remark that "at this point in time, nothing compelling has materialized in terms of an outright sale of the company." Instead, he stressed the potential of selling its Brazilian branch of the Outback Steakhouse brand. Though Bloomin' is tight-lipped about the details, Brazilian newspaper Valor Economico claims the company has selected three bidders for the final round. The article suggested the business is worth around $472 million, so Bloomin' could receive a significant cash boost if the sale is finalized. 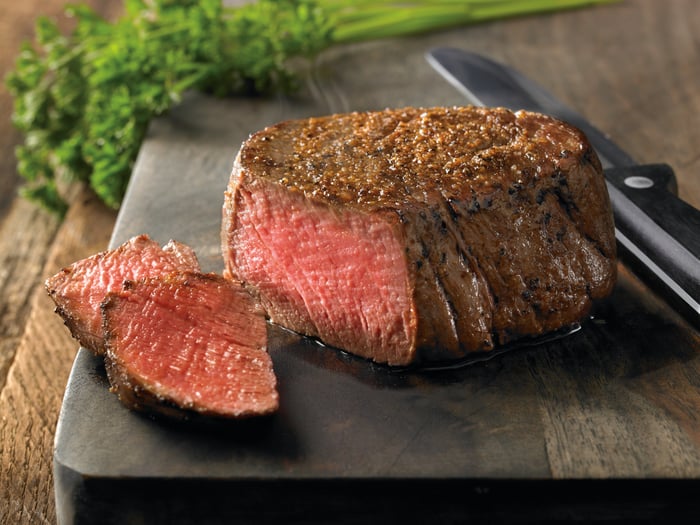 Other highlights of the earnings call and Q4 report included plans for cost-cutting initiatives that will allegedly lower expenses by a total of $40 million over 2020 and 2021. Comparable-restaurant sales at Outback Steakhouse climbed 2.7% in Q4 2019, helping the company bring U.S. comparable-restaurant sales for all brands back into positive territory . Quarterly adjusted diluted earnings per share (EPS) grew slightly year over year, from $0.30 to $0.32. While total revenues crept upward by 0.9% for the quarter, adjusted operating margin shrank -0.8% year over year.

With a sale of the entire business apparently off the table for now, removing one of the main drivers of investor optimism in 2019, are there any other factors justifying Bloomin's guidance of 20% to 23% adjusted EPS growth in 2020, and doubling of annual dividends from $0.40 to $0.80? One possible cause for hope is the rapid increase of delivery sales, called "off-premise sales" by Deno.

Bloomin' partnered with food delivery company DoorDash in September 2019, offering home delivery from both Outback and Carrabba's locations. The company attempted to encourage off-premise orders with special promos, including free steaks. The rollout apparently succeeded, with home deliveries spiking by 20% at Outback Steakhouse and 32% at Carrabba's Italian Grill during Q4. Though the company's currently available filings do not break down the results in detail, this sharp rise in off-premise sales may have contributed significantly toward the positive sales momentum visible in Bloomin's two biggest brands in Q4.

Can Bloomin' thrive without being sold?

Bloomin's stock rocketed upward following the earnings call, gaining 11% in just one day. The price has fallen somewhat since, but remains above the stock's value just before the earnings call.

The stock's notable share value rise during 2019 was apparently driven mostly by the possibility of Bloomin' being sold, and the potential for a massive change of strategic direction caused by new ownership. With that being the case. is there enough sign of improving strategies to justify its stock price, and possibly foreshadow future growth, now that a sale of the whole company seems unlikely?

Bloomin's aggressive push into delivery with its DoorDash alliance appears to be helping stabilize its bottom line, but it's not transformational. Its sale of Outback Steakhouse's Brazilian operation could generate several hundred million dollars in cash. Having such a windfall of cash could position Bloomin' to launch new initiatives revitalizing its performance. But what will the company do with this capital?

David Deno once again gave a partial answer during the Q4 earnings call. He noted that Brazil is an "underpenetrated" market for Bloomin', and the company intends to open 25 new outlets there in the near future. He also indicated that it planned to open franchises across Latin America, Asia, and the Middle East.

Though funds from the sale of the Brazilian Outback Steakhouse chain will presumably help bring these plans to reality with a cash infusion, the strategic thinking behind the move seems slightly muddled. Outback Steakhouse Brazil is already one of Bloomin's most profitable brands. Its 5.8% 2019 sales growth outpaced all four of the company's brands in the USA. Selling a highly successful, growing brand in Brazil simply to use the money to open new restaurants under other brand names in Brazil seems counterproductive, or at least puzzling.

Investors' interest in Bloomin' selling itself, shown by share purchases in 2019, seems possibly justified given the rather opaque strategic decisions of current management. While there are certainly positive signs – improving sales, successful rollout of DoorDash delivery, franchise growth – it remains unclear whether any of these will lead to significant long-term performance improvements. Those currently without a position in the stock may want to wait and see what develops during 2020 before adding it to their portfolio.