Please ensure Javascript is enabled for purposes of website accessibility
Log In Help Join The Motley Fool
Free Article Join Over 1 Million Premium Members And Get More In-Depth Stock Guidance and Research
By Adria Cimino – Feb 27, 2020 at 7:00AM

A partnership with ThredUp may give the retailer a lift, but it's unlikely to be the spark investors are waiting for.

Sustainability is important to today's consumer, and now The Gap (GPS 0.82%) is getting into the game. Starting in April, the embattled retailer will debut a partnership with online resale shop ThredUp under which customers will be able to turn in used clothes for store credit at its chains. Though this may give the company a nice PR boost, it's unlikely to kick-start the recovery it needs, nor will it quell investors' concerns about the future of the business. 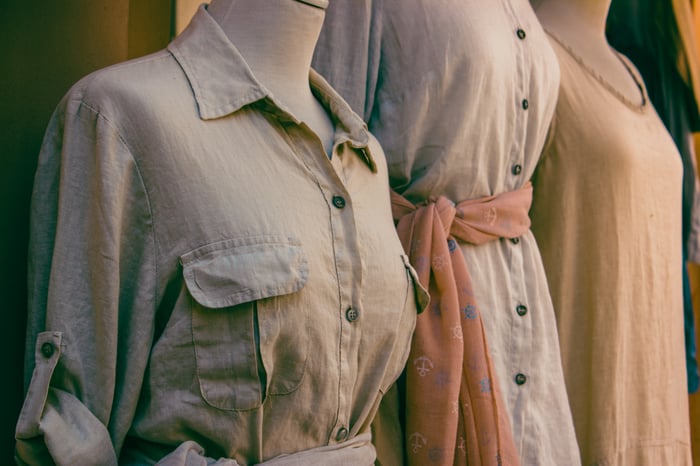 How will this partnership work?

ThredUp bags and labels will be available at select U.S. Gap, Banana Republic, Athleta, and Janie and Jack stores so that customers can easily put their used clothing up for consignment and receive credit toward new clothing. But ThredUp already works with other retailers in a variety of ways. For example, you'll find ThredUp stores inside some Macy's locations. Other retailers have launched their own sustainability programs -- for example, Nordstrom, with its See You Tomorrow resale shop. Given that the Gap is far from the first retailer to take a stand on reducing fashion waste, this effort is unlikely to stand out in consumers' minds as making the company significantly more environmentally friendly than its peers.

That said, even though the Gap is jumping on a bandwagon instead of leading the charge, the idea still is wise, and it should please a healthy swath of its customers and potential customers.

A United Nations Partnership on Sustainable Fashion report in 2018 showed nearly 20% of global wastewater is produced by the fashion industry, and cotton farming is responsible for 24% of insecticide use. And as it becomes more widely known how much the clothing industry contributes to overall global waste and pollution, a large fraction of consumers are starting to take notice. According to research by Boston Consulting Group, 75% of consumers view sustainability as very important, and more than a third have walked away from their preferred brand over environmental or social issues. Still, the research found that sustainability concerns aren't the biggest drivers of purchasing behavior -- only 7% of consumers see them as the key factor. Instead, quality and value continue to be the top considerations.

The statistics above support the importance of sustainability efforts for retailers, but they also suggest that they won't necessarily translate into sales right away. A company's efforts to reduce fashion waste may take years to boost sales or earnings. And, due to the fact that many retailers have started to make sustainability more of a priority, there might only be a few who are able to stand out for their efforts, and win over customers with them.

From a shareholder perspective, then, the Gap's partnership with ThredUp is unlikely to help it out of the current quagmire.

For a number of reasons, it has become harder for investors to be clear about the Gap's future: CEO Art Peck stepped down late last year, plans to spin off Old Navy were canceled, and the company has yet to name a new permanent leader or publish a strategic turnaround plan. The stock has lost 42% over the past year.

In the fiscal third quarter, the Gap reported same-store sales declines at its namesake store, Banana Republic, and even Old Navy, the brand that has been the strongest in recent years. Gross profit, gross margin, and diluted earnings per share all fell from the year-earlier period. Online competition, declining mall traffic, as well as a lack of certain services like buy-online-pick-up-in-store for the Gap brand all are headwinds holding the retailer back.

The Gap is scheduled to report its fiscal-fourth-quarter earnings on March 12, and it's unlikely those numbers will completely change the picture investors see. But listen closely for any news about developments in the CEO search. Any updates about strategy will be of critical importance, but those are more likely to come once a new leader is in place.

The sustainability effort, while noble, doesn't brighten the outlook for the Gap. Only the appointment of a permanent CEO and the announcement of a plan to revive the retailer will offer investors a new reason to shop for its stock.