Please ensure Javascript is enabled for purposes of website accessibility
Log In Help Join The Motley Fool
Free Article Join Over 1 Million Premium Members And Get More In-Depth Stock Guidance and Research
By Evan Niu, CFA - Feb 27, 2020 at 8:00AM

There are now over 60 million domestic paid subscriptions.

The domestic music industry continues to enjoy a resurgence that is being driven in large part by the ongoing shift toward streaming services like Spotify (SPOT -3.00%) and Apple (AAPL -0.14%) Music. The Recording Industry Association of America (RIAA) has released its 2019 year-end report on the industry, and it shows that streaming music revenue jumped 20% last year to $8.8 billion.

Here's an incredible statistic from the RIAA: "The streaming market alone in 2019 was larger than the entire U.S. recorded music market just 2 years ago in 2017." Streaming services accounted for an overwhelming 79.5% of all recorded music revenue last year, up from $7.4 billion in 2018 (75% of total industry revenue). That includes all forms of streaming services: premium subscriptions, ad-supported tiers, and internet radio services.

"Paid subscriptions to on-demand streaming services contributed by far the largest share of revenues as well as the biggest portion of revenue growth for the year," according to the RIAA. Paid music-streaming leader Spotify added 28 million premium subscribers worldwide throughout 2019, including a record 11 million new subscribers in the fourth quarter. Apple's last disclosure was that Apple Music had 60 million subscribers, although the Cupertino tech giant should be approaching 70 million.

Streaming subscription revenue for 2019 came in at $6.8 billion, of which an estimated $829 million came from so-called "Limited Tier" services, which have various limitations around availability or devices. For example, Amazon offers Prime Music as part of its broader Prime program, which includes just 2 million songs. The e-commerce company, which recently said it has 55 million total music customers, also offers a single-device plan for just $4 per month.

Paid subscriptions in the U.S. (excluding limited tier services) have now hit 60.4 million, according to the report. 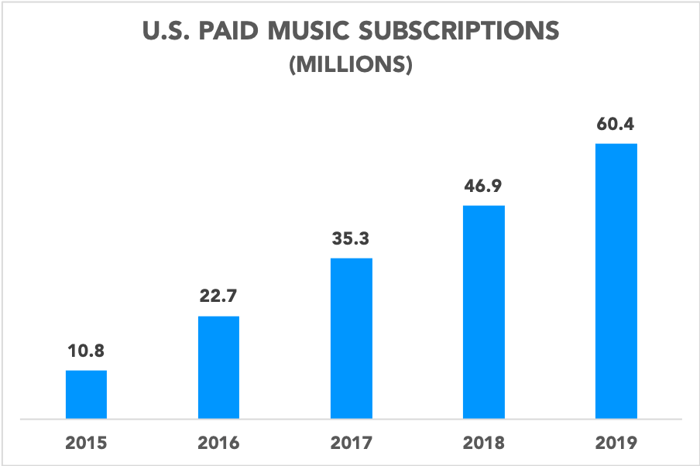 As one might expect, digital downloads continue to shrink, as consumers overwhelmingly prefer the streaming model nowadays. Digital download revenue fell 18% to $856 million, dipping below $1 billion for the first time since 2006. Apple's iTunes Store, which revolutionized the music industry decades ago, had been seeing sales steadily decline, which was partially what spurred the Mac maker's entry into streaming.

In terms of physical products, the vinyl revival continues to surge, with vinyl records revenue increasing 19% to $504 million, partially offsetting a 12% dip in CD revenue. That's the highest level of revenue from vinyl since 1988, marking the 14th consecutive year of growth for the format. Despite the rise of digital streaming, vinyl records are growing in popularity among collectors and analog music enthusiasts.

Just in case it wasn't clear by now, streaming is the future of the music industry.