Please ensure Javascript is enabled for purposes of website accessibility
Log In Help Join The Motley Fool
Free Article Join Over 1 Million Premium Members And Get More In-Depth Stock Guidance and Research
By Royston Yang – Feb 28, 2020 at 8:00AM

Texas Roadhouse continues to impress with its full-year 2019 earnings report.

Investors who feel hungry after spending time and energy building up their portfolios should head to Texas Roadhouse (TXRH 4.79%) for a hearty meal. The restaurant chain just reported strong earnings to close out 2019 with revenue up 12.2% during the year and net income up 10.3%.

The restaurant's strong track record is the reason it remains one of my top restaurant stocks. The company opened 22 new restaurants last year, including three Bubba's 33 locations and nine international franchises. Management has also raised the quarterly dividend to $0.36 per share for 2020, up 20% from the previous year's $0.30 payout. This represents the seventh consecutive double-digit increase in the quarterly dividend for the company and demonstrates the company's confidence in its future business prospects.

Here are three reasons investors should include this company in their portfolio. 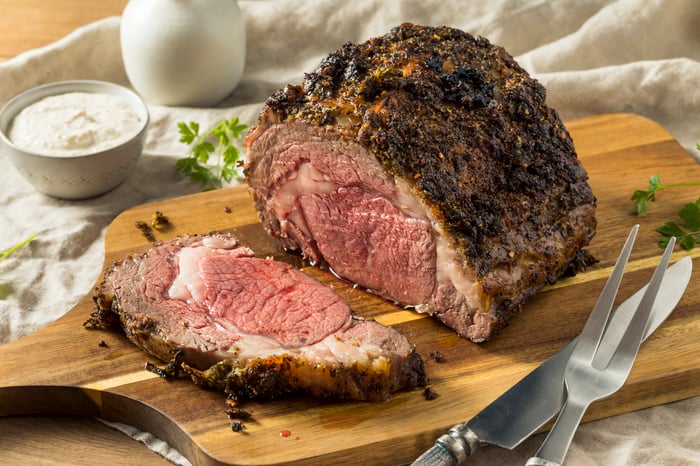 The company has demonstrated consistent growth on its top and bottom lines over the last five years, while maintaining strong comparable-sales as well. Such results show that Texas Roadhouse managed to moderate its pace of store openings so as to prevent over-expansion, which could have resulted in a wider market presence but weaker results. This measured approach provides assurances to investors that the company is not gunning for growth at all costs but instead ensuring that when they do open new locations, it is after careful consideration of the underlying economics.

Texas Roadhouse's net income margin has also improved over the last five years. It started out at 5.4% in 2015 and hit 6.3% last year.

Texas Roadhouse delivered a better performance against its peers, which in itself is admirable considering the competitive nature of the industry and the fickle behavior of consumers. Darden Restaurants (DRI 5.43%), which operates the Longhorn Steakhouse and Olive Garden brands, recently reported sales growth of 3.8% year over year for the first half of fiscal 2020, far below the  double-digit improvements seen by Texas Roadhouse. Comparable-sales were up just 2.0% during Darden's fiscal second quarter, though the Longhorn Steakhouse chain led the pack with 6.7% growth.

Over at Bloomin' Brands (BLMN 6.29%), which owns Outback Steakhouse, comparable restaurant sales were weaker year over year at just 2.0% in 2019 versus 4.0% a year ago. Revenue and adjusted earnings growth also underperformed Texas Roadhouse last year, up 0.3% and 2.7%, respectively.

During the company's latest earnings call, CEO Kent Taylor said the company is targeting at least 30 restaurant openings this year. This includes as many as seven Bubba's 33 restaurants, as the success of adding a lunch menu at five locations has given the company confidence to open more outlets. Comparable sales for Bubba's 33 were up an impressive 7.1% year over year for 2019, and franchise partners have asked management to open as many as eight international locations this year.

There is also a planned price increase of around 1.5% kicking in the second quarter of fiscal year 2020, as some states in the U.S. have implemented minimum-wage increases. These increases are needed in order to mitigate the effects of higher costs relating to staff, which are always a significant component for any restaurant operator. Effective pricing increase for the year would stand at 2% to 3% and help offset the effects of inflation as well.

Serving up a delicious treat

Capital expenditure guidance for 2020 is on the high side at $210 million to $220 million, as the company plans to buy some land rather than renting it. The amount also includes the relocation of six older restaurants to new locations within the next 12 months. The relocation benefits the company as newer sites can also have more parking space, allow for a larger building, and may come with more favorable lease terms.

It sounds like the company is on track for further steady growth this year. I am confident that management can continue to deliver consistent earnings growth with an outlook superior to many of its industry peers. Investors who include Texas Roadhouse in their portfolios can expect to be served up a delicious treat over time.