The global march toward cannabis legalization has seemingly awoken another long dormant area of scientific interest: psychedelics as medicine. While the idea of using LSD, MDMA, and psilocybin (the main hallucinogenic compound in magic mushrooms) to treat mental health disorders is far from a trail-blazing concept, this whole area of research had been off limits for the better part of the last 50 years. Then, something strange happened. 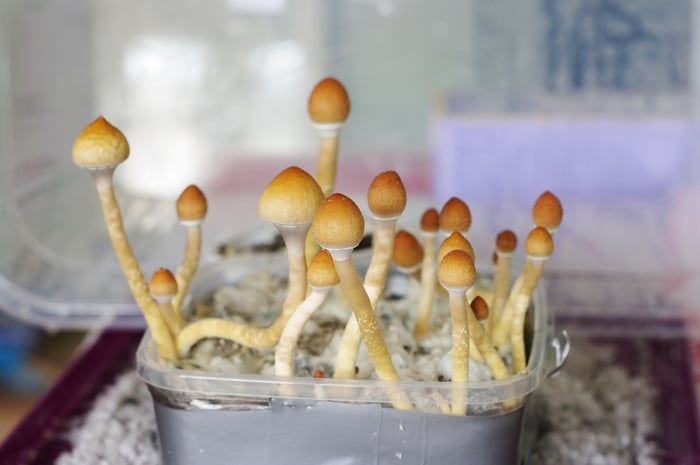 The dawn of a new era in psychedelic medicine

This renewed interest in psychedelics is being sparked by a pair of seemingly unrelated events. First up, cannabis has now been scientifically validated as a treatment for two severe forms of childhood epilepsy (more on this in a moment). These pioneering efforts with cannabis as medicine, in turn, have inspired researchers to take a second look at other controversial compounds like psilocybin.

The second driver is Johnson & Johnson's (NYSE:JNJ) groundbreaking work with the ketamine-derived medicine Spravato. In March 2019, J&J's hard work paid off when the FDA approved Spravato for treatment-resistant depression. This landmark approval is unique in that ketamine is well known to have hallucinogenic properties, as well as a long history as a party drug.

What's important to understand is that a paradigm shift is starting to taking shape within the Western medical community. In effect, scientists are increasingly intrigued by the therapeutic potential of psychedelics as treatments for a whole range of mental health disorders. Pyschedelic medicine thus has the potential to be a gold mine for early investors.

Shroom stocks may be a far better bet than cannabis

Psychedelic medicine offers investors several key advantages over legal cannabis. First and foremost, there will be considerably less competition in this emerging space, thanks to the stringent scientific, logistical, and regulatory barriers involved. Keeping with this theme, J&J's Spravato has to be administered under the direct supervision of a healthcare provider. All psychedelic therapies are likely to be administered in the same manner. That's a level of administrative control that simply doesn't exist for medical cannabis.

In addition, psychedelic therapies will probably sport markedly stronger intellectual property rights than most medical cannabis products. This built-in economic moat should translate into steady levels of revenue growth for the industry -- a key feature that is currently lacking in the legal cannabis space because of the lack of a viable competitive moat.

What's the risk? Any approved medicines will have to be rescheduled by the Drug Enforcement Administration (DEA). Right now, almost all psychedelics are listed as Schedule I drugs, meaning they have no currently accepted medical use and are considered to have a high potential for abuse.

Fortunately, this issue shouldn't be a show-stopper. Back in 2018, the DEA rescheduled GW Pharmaceuticals' (NASDAQ:GWPH) cannabis-based epilepsy medicine, Epidiolex, following its regulatory approval by the FDA. So, there's no overarching reason to think psychedelics can't be handled in the same manner, especially if a drug successfully completes a rigorous clinical trial program.

Potential IPOs within the next year

This flurry of clinical activity and growing public interest in pyschedelic medicine is expected to spark a handful of initial public offerings (IPOs) soon. Here is a list of the companies known to be considering an IPO.

Mind Medicine is reportedly considering an IPO on Toronto's NEO Exchange in early March. The IPO would take place via a reverse takeover under the ticker MMED. Mind Medicine lists former Canopy Growth (NASDAQ:CGC) co-CEO Bruce Linton as a director, as well as Shark Tank's Kevin O'Leary as an investor.

Compass Pathways is also mulling over the public option. One of the company's main financial backers, biotech building company Atai Life Sciences, has reportedly spoken to multiple financial institutions about an IPO for Compass. Atai is seeking an $800 million capitalization for Compass upon its public debut, presumably on a Canadian stock exchange.

Field Trip Ventures is a Canadian venture capital fund that funds research into psychedelic medicines. The company has stated that it might consider going public sometime soon, but it may also decide to remain private for the time being because of the nascent stage of the industry.

Buying psychedelic medicine stocks during the first wave of IPOs is a risky proposition, to be sure. But the upside potential is undoubtedly immense. Any novel drugs approved for hard-to-treat forms of depression will have megablockbuster sales potential, with annual sales topping $5 billion. In that event, a Compass Pathway IPO, even at an initial market cap of $800 million, would probably look like an incredible bargain in hindsight.

The IPOs of Canopy Growth and GW Pharmaceuticals illustrate this point nicely. In brief, Canopy Growth and GW Pharmaceuticals both delivered 1,000% plus returns for investors that bought their IPOs. Psychedelic medicine stocks, though, may eclipse even these stately returns, thanks to their inherent competitive advantages over the struggling legal marijuana industry.