Please ensure Javascript is enabled for purposes of website accessibility
Log In Help Join The Motley Fool
Free Article Join Over 1 Million Premium Members And Get More In-Depth Stock Guidance and Research
By Rich Smith - Mar 2, 2020 at 7:13AM

Vigor Marine was on course to become a competitor, but it just turned into an ally.

America's military-industrial complex is shrinking. To some (defense policy doves), that may sound like good news. But it's not so much the amount of total defense spending that's shrinking, but rather the number of companies divvying up the loot.

Since the end of the Cold War 30 years ago, a series of mergers, reorganizations, and bankruptcies has shrunk the roster of big, independently operating defense companies from more than 50 to just a handful: Lockheed Martin, Boeing, and Northrop Grumman, focusing mainly on aerospace; and General Dynamics, Raytheon, and Huntington Ingalls (HII 1.00%), handling ordnance, electronics, armored vehicles, and warships. Throw in truck builders Oshkosh and Textron and electronics specialist L3Harris, and that gets you up to nine companies. Count small-fry drone makers such as Kratos and AeroVironment, and you're maybe back up to 11 -- but still a long way from 50.

Maybe this isn't necessarily a bad thing. Bigger companies have greater economies of scale to keep costs low, and more financial heft to withstand downturns in the economy. On the other hand, big companies aren't always as nimble or as innovative as smaller companies. Moreover, fewer companies competing on price can defeat any gains reaped by greater efficiency of production. 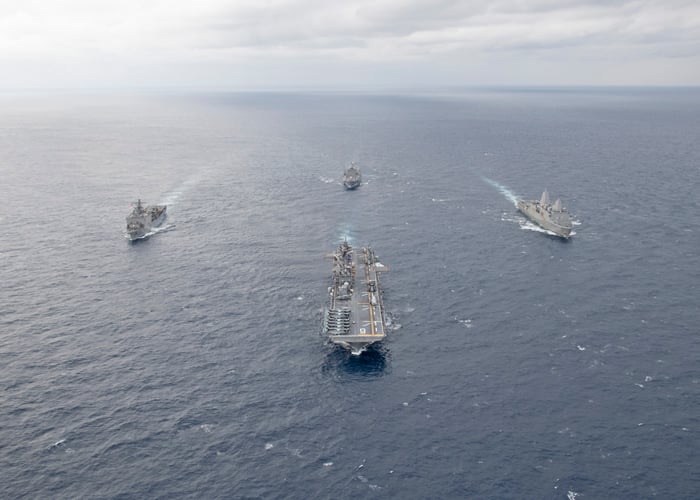 In recent years, I've watched the military mostly accept this development as a fait accompli, with notable exceptions. In the military shipbuilding sector in particular, there have been multiple instances in recent years in which the Navy has encouraged diversification by spreading out its maintenance, overhaul, and repair contracts to smaller, privately held shipyards such as Detyens and, to an even greater extent, Vigor Marine.

Over the past three years, for example, Defense Department records show that Detyens has been the recipient of some 20 smallish Navy contracts for dry-dock work on its warships. And Vigor Marine has been awarded dozens of Pentagon contracts potentially worth a total in excess of $1 billion.

Most of these contracts were admittedly small, on the order of a few million dollars. But last September, for example, the Navy awarded Vigor $255 million to repair and upgrade two Ticonderoga-class guided missile cruisers. And then just last month, Vigor was one of three firms named to compete for work under a $671 million umbrella contract to maintain surface warships visiting Naval Station Pearl Harbor.

If this trend continues, the steady supply of Pentagon dollars might eventually help a company like Vigor become big enough to challenge military contracting giants on larger, more lucrative projects, such as actually building warships. In time, other smallish contractors could grow similarly, and the roster of defense companies might begin expanding again. This would give investors more defense stocks to choose from, a positive development, in my view.

Of course, the defense companies that are already big may not see things that way.

Perhaps this is why Huntington Ingalls announced a couple of weeks ago that it is forming a partnership with Vigor Marine.

In a somewhat complex transaction, Huntington will contribute its San Diego Shipyard to Titan Acquisition Holdings, a company that (according to S&P Global Market Intelligence) is majority owned by private equity giant The Carlyle Group (CG). Titan itself is described in this press release as being comprised of Vigor Industrial (Vigor Marine's parent company) and MHI Holdings (also a subsidiary of Vigor Industrial).

In effect, Huntington Ingalls is merging part of its business with Vigor Marine, taking for itself a minority interest in Titan (and Vigor) in exchange.

Now, even if Vigor Marine does thrive, and grow to the point it might seriously compete with Huntington for large defense contracts, Huntington Ingalls will own a piece of that action, too. It has cleverly moved to reduce its risk, co-opt a rival, and claim a part of Vigor's business for its own.

This can only be good news for Huntington Ingalls and its shareholders. When you consider that, at a valuation of just 1.1 times annual sales, it is currently one of the cheapest defense stocks for investors, this development is one more reason to give Huntington Ingalls stock a good, hard look.