Please ensure Javascript is enabled for purposes of website accessibility
Log In Help Join The Motley Fool
Free Article Join Over 1 Million Premium Members And Get More In-Depth Stock Guidance and Research
By Will Healy - Mar 2, 2020 at 7:40AM

Still, despite the hiccup in revenue, Lowe's continues to post solid earnings growth. With new leadership and a restructuring plan in place, this consumer discretionary stock can resume its steady march higher.

Lowe's disappoints on revenue and guidance

Lowe's reported fourth-quarter earnings of $0.94 per share. This beat Wall Street estimates by $0.03 per share and came in well ahead of the $0.80 per share reported in the prior-year period. However, revenue of $16.0 billion fell short of estimates, though that figure was still up about 2% year over year.

Management's guidance also did not satisfy Wall Street expectations. For the full year, the company expects to deliver adjusted earnings of between $6.45 and $6.65 per share. Analysts had previously estimated $6.67 per share on a consensus basis. 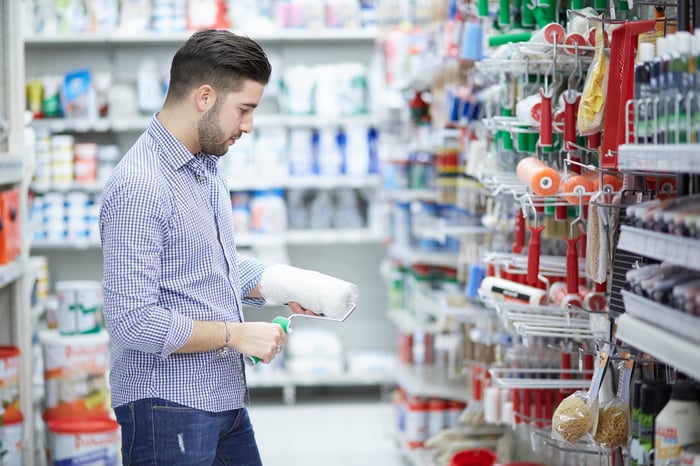 At first glance, one can understand the hesitancy about buying Lowe's stock. Marvin Ellison left JCPenney to take the CEO position on July 2, 2018. On that day, Lowe's opened at $95.36 per share. The stock trades at about $107 per share as of this writing, a gain of almost 12% during Ellison's tenure. However, that gain came amid sharp sell-offs that likely tested investors' patience.

Moreover, the company went through a restructuring during that time. Lowe's exited some ancillary businesses that Ellison felt distracted from the core mission of Lowe's. It also closed its stores in Mexico, along with some underperforming locations in the U.S. and Canada. Some of these "underperformers" included the smaller-format stores designed to serve those living in dense urban areas, a departure from archrival Home Depot's strategy.

The (remaining) case for Lowe's

However, Lowe's stock still offers a compelling value proposition to investors. Following the broad market trade-off fueled by coronavirus fears, shares sport of a forward price-to-earnings ratio of just 16. And the company projected adjusted earnings growth between 13% and 16% in fiscal 2020.

This compares well with Home Depot, which trades at 21 times forward earnings. That premium will only buy investors less than 10% annual earnings growth over the next five years, according to consensus estimates. 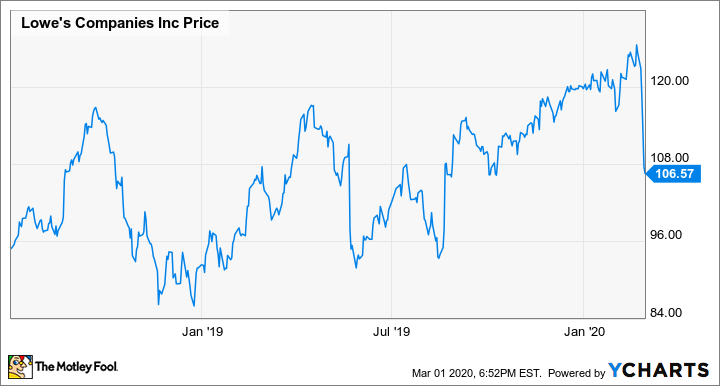 Investors should also pay attention to the dividend. With a yield of 2% as of this writing, Lowe's dividend stands near the S&P 500 average. However, what is not average is its 57-year streak of payout hikes. With a payout ratio of 38% for fiscal 2019, the company is in a strong financial position to keep up its dividend growth.

Lowe's has also addressed a legitimate growth concern. It maintains a footprint of over 2,200 stores in North America. Given this saturation, investors might ask how Lowe's can find new ways to grow. As mentioned before, it pulled out of Mexico last year and ended its joint venture in Australia in 2016. Also, with the current economic expansion about to enter its 12th year, the stock will likely suffer in the face of a housing industry downturn.

For now, internal factors have driven profit growth. Lowe's had fallen behind Home Depot in making in-store improvements. Like Home Depot, it now more actively competes for the business of professional contractors. Management has also emphasized promotions as a way to build customer loyalty, and Lowe's hopes this will help the company when the next downturn occurs.

For now, with double-digit earnings growth and an attractive valuation, investors have good reason to shop for Lowe's stock.