If your portfolio got hit by the coronavirus, these Motley Fool contributors might have the cure.

Suddenly, markets are in turmoil.

As the coronavirus outbreak has spread around the world, now threatening to disrupt daily life in the U.S., stocks crashed in the last week of February. The S&P 500 fell more than 10% in its fastest correction ever.

Long-term investors know that such volatility presents opportunity as high-quality stocks go on sale in these kinds of panicked crashes. In the words of Warren Buffett, now looks like a great time to be greedy while others are fearful. On that note, keep reading to see why Tanger Factory Outlets (SKT 3.99%), Guardant Health (GH 4.03%), Autodesk (ADSK 4.95%), Roku (ROKU 2.85%), and Walt Disney (DIS 3.69%) are all on our list of top stocks to buy now. 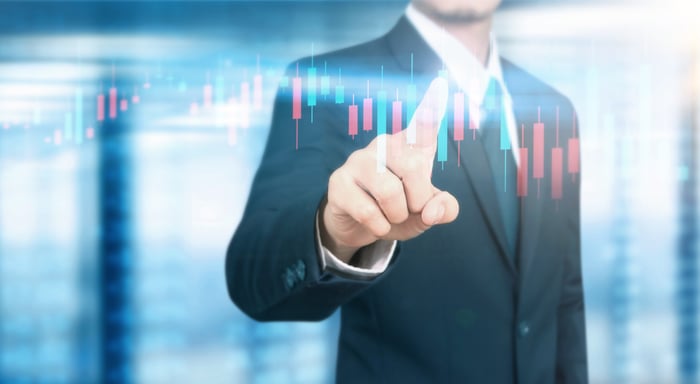 Not all retail is in trouble

Matt Frankel, CFP (Tanger Factory Outlet Centers): The fears about the "retail apocalypse" have been overblown in general, and there are some enticing bargains in the sector.

To be fair, there are some types of retail I wouldn't invest in at any price. For example, companies that own regional strip malls and retailers who sell full-price discretionary products aren't going to be found in my portfolio anytime soon.

On the other hand, there are some types of retail that still have a bright future. Discount-oriented retail and experiential retail are two of these, and real estate investment trust Tanger Factory Outlet Centers checks both boxes. Outlets often have bargains that e-commerce retailers simply can't match, and the "treasure hunt" aspect of shopping at the outlets adds an experiential component.

Tanger has raised its dividend every year since its 1993 IPO and is on firm financial footing. With an impressive occupancy rate of 97% at the end of 2019, and same-tenant sales that increased by 1.5% year-over-year, there's no indication that Tanger's business is in trouble. Plus, Tanger's stock has been beaten down to a ridiculous valuation recently. The stock trades for about six times 2020 funds from operations and now features a dividend yield of more than 12%.

To be clear, I'm not saying that Tanger is going to be a smooth ride. Some of Tanger's tenants may go bankrupt, and we could see a small uptick in vacancies as the retail industry adjusts to the new era. However, for patient investors, the reward potential from this financially solid REIT dramatically outweighs the risks.

Keith Speights (Guardant Health): When you hear that someone you know has been diagnosed with cancer, it's always good news if you learn that the cancer was caught early. In many cases, early detection of cancer dramatically improves the chances that the disease can be treated successfully. The problem, though, is that there are far too many cases where cancer isn't diagnosed at an early stage.

Liquid biopsies offer a solution to this problem. They're tests that identify DNA fragments that break off from tumors into the bloodstream, holding the potential to detect cancer at very early stages. And there's one company that's at the forefront of developing liquid biopsies -- Guardant Health.

The company currently markets two liquid biopsy products. Guardant360 is used to help select the best therapy for cancer patients. GuardantOmni is used by biopharmaceutical companies to help screen patients for clinical studies evaluating experimental cancer drugs. Guardant Health thinks that the addressable market for these products is around $6 billion in the U.S. alone.

But the bigger opportunity lies with the company's Lunar-1 and Lunar-2 liquid biopsy products, which currently are only available for research use. Lunar-1 is intended to be used to detect residual cancer and monitor for cancer recurrence. The test could have an addressable market of $15 billion per year. Lunar-2 targets early detection of cancer and could have an addressable market of more than $30 billion annually.

Guardant Health recently reported its Q4 results, with revenue soaring 91% year over year to nearly $63 million. I expect that growth rate will slow down somewhat over the near term. However, my view is that Guardant Health could easily quadruple or more over the next decade as its liquid biopsy products gain widespread adoption.

Autodesk has become one of my favorite SaaS companies. The company sells a portfolio of leading software products that enable millions of engineers, architects, construction professions, designers, and entertainers to do their jobs.

Autodesk used to sell its software under licensing deals. However, the company switched to the SaaS model a few years ago and it is just now starting to reap the benefits. Revenue is growing fast, margins are increasing, and free cash flow is soaring.

The exciting news for investors is that the transition should continue to pay off for Autodesk for many years to come. The reason is that less than 5 million of its customers have become paying subscribers. That might sound like a lot, but more than 14 million people are still using older versions of Autodesk's software. Nearly all of them will have to upgrade eventually, which provides this company with a predictable stream of demand for years to come.

While the stock might look expensive at first glance -- shares are trading for more than 190 times trailing earnings and 41 times forward earnings -- market watchers predict that this company will grow its profits in excess of 60% annually over the next five years. If that number is anywhere close to accurate, then I could easily see this company producing market-beating returns from here.

Anders Bylund (Roku): Roku is one of the most exciting growth stocks on the market today. This company is sure to thrive as the streaming media market evolves around the world, allowing you to invest in digital streaming as a whole without picking a winner in the so-called streaming wars. The company is off to a flying start as trailing revenues more than doubled over the last two years.

On top of all that, Roku's shares look relatively cheap right now. Share prices have fallen 25% over the last three months, and Roku's biggest sin in this period was to deliver a smaller earnings surprise than usual in November's third-quarter report.

Sure, Roku isn't profitable right now. That's enough to make many value-chasing investors turn away. But Roku is running its business in the red on purpose, investing every extra nickel produced by its skyrocketing revenue streams into more research, better marketing, and new growth-promoting ideas. It's all about boosting the top line as quickly as possible while the streaming market grows up, switching into a profit-taking mode later on. Spend money today to make more money in five years, you know.

That's what you get from Roku, and this looks like a great time to lock in those shares with prices down.

A timeless company in an unsteady time

Jeremy Bowman (Walt Disney): Disney needs little introduction. It's been around for generations. It's one of the most valuable brands  in the world, and it's a global entertainment powerhouse, encompassing everything from movies to TV to theme parks and resorts to consumer products like toys.

Disney's brand portfolio and the flywheel effect of its product ecosystem make for a solid buy case in almost any market, but now looks like an especially good time to pick up shares of the entertainment juggernaut.

First, the stock is down more than 20% from its all-time high three months ago as shares have fallen on the recent coronavirus sell-off and jitters about CEO Bob Iger stepping down. I'm not worried about the transition in the CEO chair. Iger has been trying to get out of the hot seat, but he delayed his move until Disney absorbed Fox and launched Disney+, which it did last November. Iger didn't catch the early bird to Boca, either. He's sticking around as Executive Chairman through next year, and he'll also be leading the company's creative endeavors.

It's true that Disney is taking a hit from the coronavirus. All three of its theme parks in Asia are currently closed, and other parts of its resorts business, like its cruise line, will probably see a pullback. However, this is a diversified business, and most of the company's profit still comes from video entertainment. The effect of the parks closing is only temporary after all, and the coronavirus situation in China already seems to be improving as Starbucks has reopened most of its stores that were closed. When the parks reopen, the stock should get a jolt.

The second reason why now looks like excellent buying opportunity is Disney+. You may already know Disney's trademark streaming service crushed expectations in its November launch. It had already signed up nearly 30 million subscribers as of a month ago, nearly all of which were in North America. On March 24, the service is set to launch in most of Western Europe, including major markets like the U.K., France, Germany, Italy, and Spain. Based on the U.S. launch, I wouldn't be surprised to see blockbuster numbers come out of Europe as well. That will remind investors of the potential of Disney+, which had the market so excited about the stock just three months ago, and should help the stock move back toward all-time highs again.