The German shoemaker believes space holds all the answers in its battle with the swoosh.

Adidas (ADDYY 3.40%) (ADDD.F 0.00%) found an answer to Nike's (NKE 4.38%) footwear supremacy in 2015 with the release of its Ultra Boost cushioning technology. Despite Nike's subsequent release of Epic React and Joyride, many sneakerheads still swear by Boost as the most comfortable cushion on the market, and Adidas is still seeking to stretch that perception.

To discover new ways to enhance its cushioning technology, the German footwear maker is going to conduct some experiments in space. It's sending Boost above the clouds aboard a SpaceX Falcon 9, according to a report from Florida Today. 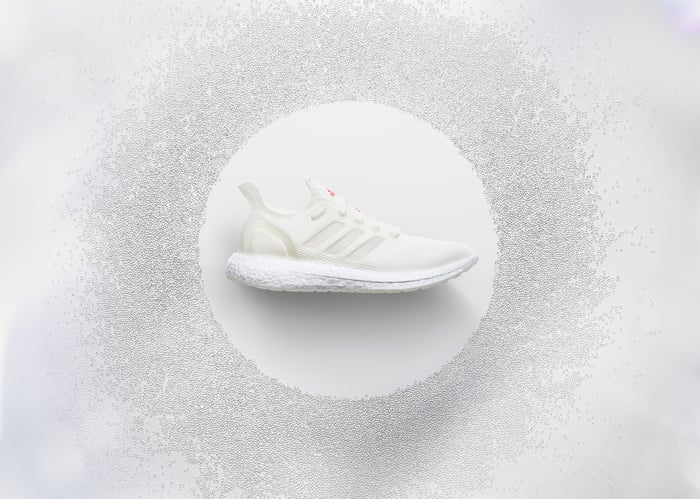 Adidas originally developed Boost using a thermoplastic polyurethane (TPU) from NASA. Thousands of individual foam pellets are fused together to make a mold. When the pellets are blown together, gravity is a crucial factor that helps settle the pellets into a final resting position.

The goal of sending Boost to space is to find out what happens when there is no gravity in the production process. Adidas wants to see how the pellets move without gravity in hopes that they can learn how to improve manufacturing methods and Boost's performance.

This comes after Nike released its Joyride cushioning technology last year, which is like Boost in that it uses thousands of tiny beads to conform to the shape of your foot.

In the most recent quarter, Nike posted sales growth of 5% on a currency-neutral basis in North America. Adidas reported growth in North America of 10%, although that was down from 18% in the same period the year before. These two athletic juggernauts are sweating it out over beads and pellets, and the competition is still heating up to win share of an athletic apparel market worth over $300 billion.