The aircraft leasing company benefited from the e-commerce giant's switch to one-day delivery.

As the e-commerce giant increasingly expands its logistics footprint in a bid to challenge UPS and FedEx, it's needed to lease ever greater numbers of planes from Air Transport Services and industry peer Atlas Air Worldwide.

Air Transport said revenue surged 44% year over year to $403 million in the fourth quarter, and was up 63% for the year, thanks to Amazon, which now accounts for 23% of total annual revenue. Although it had added expenses due to additional pilot training as Amazon implemented one-day delivery service, adjusted EBITDA rose 29% to $124.3 million. 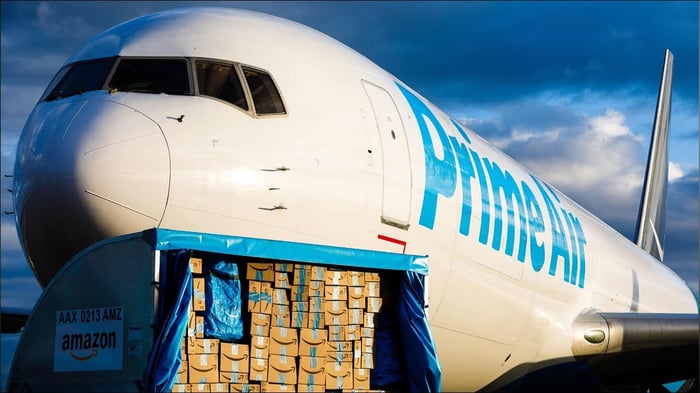 Amazon Air may have been one of the biggest contributors to Air Transport Services' better performance, but increased activity from UPS and DHL, which accounts for another 14% of revenue, also helped, as did its military contracts.

The aircraft leasing company also pointed out that it doesn't have much exposure to the coronavirus outbreak, though it said any it does have comes primarily through crew contact during military flights as they move in and out of various countries. On the whole, however, it is a limited risk.

It will be Amazon, though, that continues to drive the company forward. It has eight to 10 new 767 passenger aircraft that it is modifying into freighters, and the e-commerce leader has lease commitments for seven of them.

Air Transports Services Group forecasts adjusted EBITDA will increase in 2020 to a range of $487 million to $492 million from $452 million last year.

Is Amazon.com About to Take on FedEx and UPS?