Please ensure Javascript is enabled for purposes of website accessibility
Log In Help Join The Motley Fool
Free Article Join Over 1 Million Premium Members And Get More In-Depth Stock Guidance and Research
By Rick Munarriz - Mar 4, 2020 at 10:36AM

The revitalized chain didn't need to improve on its widely dissed queso, but it obviously doesn't hurt.

If at first you don't succeed, try giving customers what they want. Chipotle Mexican Grill (CMG 0.86%) introduced a reformulated queso recipe last week, two and a half years after rolling out the premium topping and dip to generally harsh consumer reviews. The new Queso Blanco is still based on all-natural ingredients, but it's no longer as gritty or pungent as the original offering.

Chipotle didn't need new queso. The stock was hitting at all-time highs two weeks ago, buckling recently only because the entire market was collapsing. However, with a CEO clearly committed to picking up the cadence on new product launches and keeping the positive momentum going, the new Queso Blanco can only help at this point. 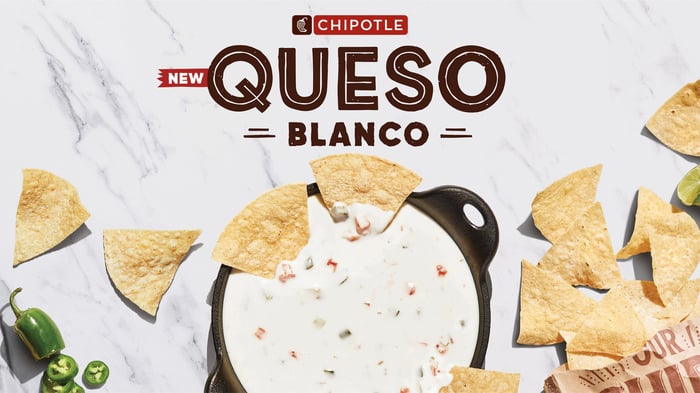 It's hard to call Chipotle's first crack at the soupy cheese sauce a disaster -- or even a mistake. The stock has more than tripled since the nationwide introduction of queso on Sept. 12, 2017, as of the all-time high it hit late last month. Comps have been consistently positive since 2017, and the pace of store-level improvement has been accelerating in recent quarters.

However, the original queso was more of a coattail rider than an actual catalyst. Comps were actually much higher in the first half of 2017 than they were in the latter half of the year, after queso hit the menu boards as a premium-priced option. Results that year were stacked up against a horrendous 2016, making it easy to recover in 2017 from the prior year's depressed performance.

CEO Brian Niccol arriving in early 2018 -- and bringing over some of the tricks he learned at Taco Bell -- has been the real driver of Chipotle's turnaround. Niccol's timing was also fortunate. He came to the fast-casual pioneer just as the popularity of third-party delivery apps was exploding, spurring the surge in digital sales that is breathing new life into both the stock and the cult-fave concept.

Chipotle is scorching hot right now. Comps soared 13.4% in its latest quarter. Most of its menu tweaks since the initial queso fumble have been generally well-received. Adding a second assembly line for digital orders and eyeing drive-thru pick-up lanes for new locations are brilliant strategic moves.

Queso Blanco can't hurt, and if it does overcome the chalkiness and bitterness complaints that haunted the original recipe, it will obviously result in a surge in sales. Chipotle's stunning turnaround in recent years is proof that investing in restaurant stocks can be lucrative -- and that even a wave of food-borne illnesses tied to your franchise isn't enough to sink a brand. There may never be an all-natural queso that pleases diehard fans of the historically processed concoction, but as long as Chipotle keeps raising its own bar, it should work out nicely for shareholders.