Please ensure Javascript is enabled for purposes of website accessibility
Log In Help Join The Motley Fool
Free Article Join Over 1 Million Premium Members And Get More In-Depth Stock Guidance and Research
By James Brumley - Mar 4, 2020 at 11:03AM

The long-beleaguered drugmaker may finally be positioned for growth again.

Teva Pharmaceutical (TEVA 4.92%) shares were already working on a recovery headed into February, hinting at an end to what had become a nearly four-year rout. After a brief pause as January came to a close, that effort was renewed early last month. Even with the weak finish for February, firm bullishness early in the month following good news on the drug development front was enough to leave behind a 10.9% gain, according to data provided by S&P Global Market Intelligence.

Once a powerhouse within the pharmaceuticals arena -- and generic pharmaceuticals in particular -- Teva Pharmaceutical has struggled since 2016, unable to adapt to ongoing changes in the marketplace. All told, Teva shares lost more than 90% of their value from peak to last year's trough, primarily in response to the company's potential liability related to its role in the opioid addiction epidemic, as well as waning sales of its multiple sclerosis drug Copaxone. The therapy lost patent protection in 2017, and while the company has attempted to replace the franchise with similarly marketable drugs, nothing has quite taken its place. 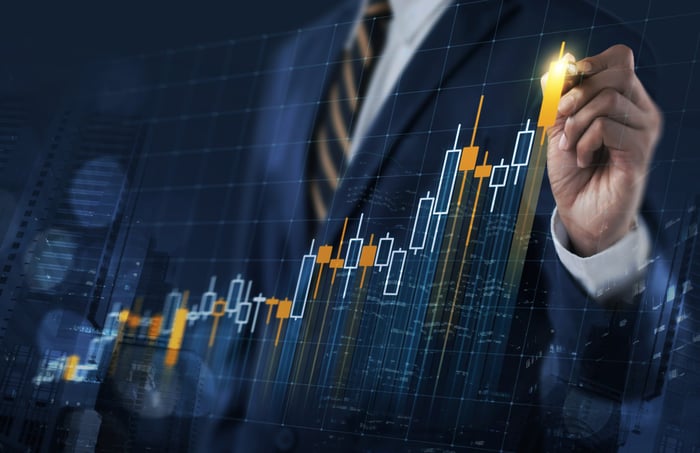 Investors might see a light at the end of the tunnel, however.

By the end of January, shares were up nearly 30% from August's low. Encouraging efficacy numbers for a trial of migraine treatment Ajovy (fremanezumab) reignited the rally after its brief pause early last month. The phase 2/3 trial conducted in Japan, where migraine headaches are not uncommon, met the company's endpoint goals. Not even another quarter of weakening Copaxone sales or the approval of a generic competitor to Teva's asthma treatment, ProAir HFA, was enough to unwind the gain.

Investors may be thinking the uncertainty that's been surrounded the stock for years is finally starting to lift, and CEO Kare Schultz is more than willing to help steer them to that conclusion. He commented after the company's solid fourth-quarter report: "This situation with declining revenues, declining product, that's over. Now we have a stable situation where we'll be slowly growing both the revenues and the operating profit."

There's still much work to be done, but if Schultz can keep the rhetoric and headlines spinning in a positive direction, the overdue gains just might persist.