Please ensure Javascript is enabled for purposes of website accessibility
Log In Help Join The Motley Fool
Free Article Join Over 1 Million Premium Members And Get More In-Depth Stock Guidance and Research
By John Rosevear - Mar 5, 2020 at 10:50AM

Lucid expects to open nine U.S. stores this year, with a VR twist, and more in 2021.

Lucid Motors plans to open nine brick-and-mortar retail stores in 2020 as it prepares to launch its first electric luxury car.

The California-based start-up is expected to unveil the production version of its first model, a luxury sedan called the Air, in New York in April. Lucid has been taking reservations for the Air since it revealed a prototype version of the car in late 2016. 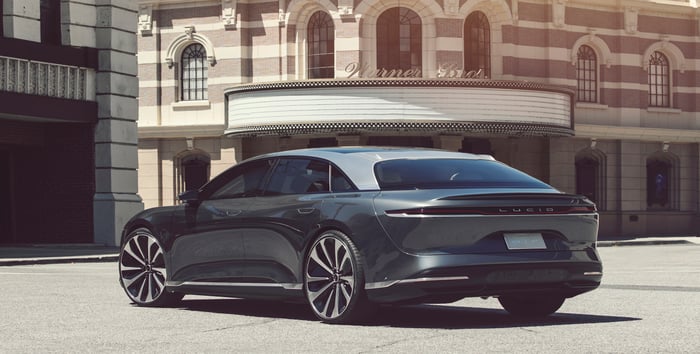 Lucid is expected to begin production of its electric luxury sedan, the Air, by the end of the year. Image source: Lucid Motors.

Lucid's retail strategy will be similar to rival Tesla's (TSLA -1.79%), but with a more upscale twist, appropriate to the Air's six-figure price. The Lucid stores, which the company calls "studios," will center on a mockup of the Air's interior, using virtual-reality devices to help customers "see" their cars as they choose colors and options.

CEO Peter Rawlinson said that the intent of the studios is to give potential customers a taste of the experience of driving and owning the car, with very specific experiences as they move through the studios and engage with Lucid's sales representatives.

Lucid has been moving steadily to bring the Air to market. The company began construction of a factory in Arizona after securing $1 billion in financing from Saudi Arabia's sovereign-wealth fund in September 2018. Late last year, it signed a long-term deal to buy its battery cells exclusively from Korean battery giant LG Chem.

Lucid is expected to begin production of the Air at its factory in Casa Grande, Arizona, late in 2020.