The COVID-19 outbreak is threatening airplane order patterns -- and the commercial aviation industry in general.

Since the company reported a well-received set of fourth quarter earnings at the start of February, it's a pretty safe bet that the decline is largely down to the general market fears over the economic impact of the COVID-19 outbreak. In addition, the company's deal to merge with defense component company Woodward (WWD 1.92%) was also welcomed by the market, so it's not that either. 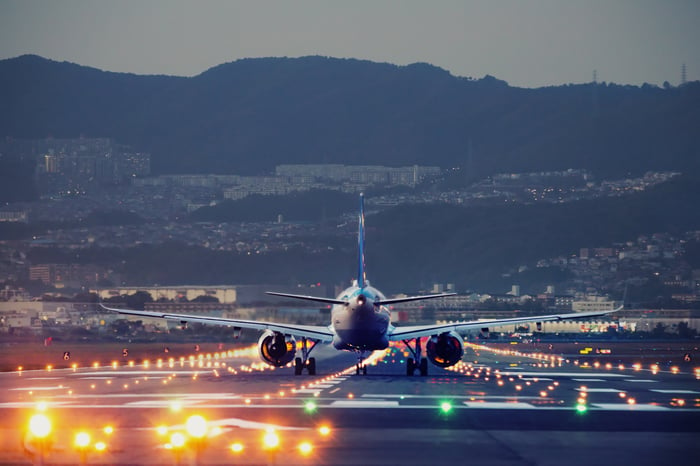 Hexcel is unusual in the sense that it generates its revenue almost entirely from the original equipment market (OEM) as opposed to the aftermarket. As such, its prospects are determined by aircraft production rather than just the amount of passenger hours flown.

A combination of increased aircraft production overall (remember that Airbus and Boeing -- provided the 737 MAX returns to service -- have multi-year backlogs in place), an anticipated pickup in wide-body demand (which tend to have more advanced composite technology content), and a raft of newer planes in production were seen as giving Hexcel a long runway of growth into the future.

However, COVID-19 concerns have led to significant falls in passenger traffic, and that usually means a fall in airline profits, and ultimately, demand for new aircraft.

If COVID-19 ultimately turns out to be contained, then you could argue that this is a temporary issue which will hurt passenger traffic for a few quarters, and cause some delays in airplane orders, but will ultimately be rectified in due course. However, if it turns out to be an extended period of disruption, then the global economy (and particularly commercial aviation) will get hit.

As with most other stocks on the market, Hexcel's investors need to keep a close eye on events with COVID-19 and on the impact it's having on airplane orders.

Ultimately, no one knows exactly how it's going to play out, but if you feel confident that the coronavirus impact will be temporary, then Hexcel is exactly the kind of stock that will bounce back strongly. However, if it is a multi-year impact, then Hexcel is likely to suffer.