A pure-play pot stock. An adult-beverage giant with a stake in the global cannabis market. Which stock is the smarter pick right now?

For a short period, Aurora Cannabis (ACB 3.24%) reigned as the cannabis producer with the largest market cap. After a huge plunge in its stock price over the past year, the company now ranks only in third place. And you could say that its position should be even lower. Constellation Brands (STZ 1.14%) owns 37% of Canopy Growth (CGC 2.64%), making the alcoholic beverage maker's stake in Canopy bigger than Aurora's market cap.

Aurora and Constellation represent two very different ways to invest in the cannabis industry. Which is the better pick for long-term investors? Here's how the two companies compare. 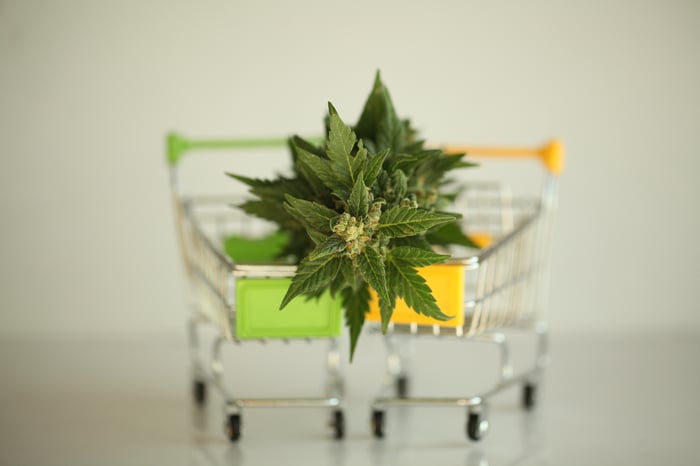 To be sure, Aurora faces its fair share of challenges. The company isn't profitable or anywhere close to it. Aurora has a boatload of debt. Its cash is dwindling. But the company is taking steps to address these issues.

Perhaps most importantly, Aurora is cutting back in a major way on its lavish spending of the past. The company slashed close to 500 jobs in early February, including around one-fourth of all corporate positions. It's delaying completion of construction at two facilities, moves that will save close to $190 million Canadian. Aurora restructured its secured credit facilities, with the inclusion of a commitment to achieve positive earnings before interest, taxes, depreciation, and amortization (EBITDA) thresholds beginning in fiscal 2021 Q1.

Aurora is also now looking for a new CEO, after founder and longtime CEO Terry Booth stepped down last month. Canopy Growth enjoyed a nice bounce after hiring a CEO with solid consumer packaged goods (CPG) industry experience. Aurora is likely to try to find a CPG veteran of its own to lead the company -- and perhaps help land a big partner from the CPG industry.

While Aurora has a lot of work to do, it also has some strengths from which to build upon. The company's products claim the second highest market share in the Canadian adult-use recreational marijuana market. Aurora also remains one of the leaders in the important German medical cannabis market and has established operations in other key international markets.

The company's production capacity also ranks at the top of the Canadian cannabis industry. Aurora's cost structure, meanwhile, is one of the lowest among its peers thanks to the use of advanced technology in its cultivation facilities.

Analysts project that the Canadian legal cannabis market will top $5 billion by 2024. If Aurora can claim 20% of that market, which seems quite possible, the company could generate annual sales of $1 billion annually in Canada alone. With Aurora's market cap currently only around $1.6 billion, the stock could have a lot of room to run.

But while Aurora's biggest prospects are in Canada and in Europe, Constellation and Canopy are already in the U.S. Canopy used some of the cash it received from Constellation to establish a beachhead in the U.S. hemp CBD market, launching its first products earlier this year.

Canopy Growth is also positioned to quickly enter the U.S. marijuana market if laws are changed in the future to make cannabis legal at the federal level. Again using some of Constellation's money, Canopy struck a deal last year to acquire U.S.-based Acreage Holdings if federal marijuana laws are revised.

Constellation's core focus, though, is on alcoholic beverages. The company absolutely dominates the U.S. premium beer market with Corona, Modelo, and Pacifico. While other beermakers continue to struggle, Constellation's sales are growing.

Expect even more growth in the future. Constellation continues to take the pulse of consumers and respond to their preferences. An example of this is the company's foray into hard seltzers, a category that's becoming increasingly popular with consumers. Constellation plans to launch a Corona-branded seltzer this year and recently acquired a minority ownership interest in Press Premium Alcohol Seltzer.

The main weak spot with Constellation's core business right now is its wine and spirits brands. However, the company is selling off several of its lower-priced brands to focus on premium products. This strategy has worked well for Constellation with beers and seems to be a smart approach that could pay off over the long run.

This isn't a difficult choice, in my view. Constellation Brands is profitable. It's the undisputed premium beer leader in the United States. It has its foot in the door if the global cannabis market skyrockets thanks to its stake in Canopy Growth. Heck, Constellation even pays a modest dividend to boot.

Aurora Cannabis could very well be a big winner -- over time. For now, though, the company and the stock continue to struggle. Marijuana stocks, in general, are likely to be highly volatile. Aurora's challenges could make it even more susceptible to big swings.

Constellation's beers provide stability that Aurora simply doesn't have. I think that makes it the better buy for now.