This banking giant and new CEO Charles Scharf are still dealing with the aftermath of a 2016 fraud scandal.

It's been a rough few years for banking giant Wells Fargo (WFC 0.80%). The problems started with a 2016 fraud investigation that revealed employees had opened millions of fake accounts without telling its customers in order to meet sales goals, violating consumer protection laws. The company has been hit with billions of dollars in fines and lawsuit settlements as a result of the case.

The scandal also caused losses in earnings, customers, and its reputation. The stock has underperformed the S&P 500 for each of the past five years and has a five-year annualized return of negative 3.7% over that period. It also led to leadership instability as CEO John Stumpf retired shortly after the scandal broke in September 2016, and his replacement, CEO Tim Sloan, resigned in May 2019, unable to turn things around.

This year, the woes continue as the company learned in February that it was hit with a $3 billion fine by federal authorities over the scandal. Also, on March 5, Democratic lawmakers on the House Oversight Committee released a report that said Wells Fargo executives did not adequately improve oversight or take the proper steps to prevent further abuses, following a year-long investigation. The stock price was down about 5% on the day following the news and is down about 26% year-to-date, to around $34 per share.

This latest report won't do anything to help quell investors' concerns about the company, but Wells Fargo has made strides to move forward under new CEO Charles Scharf.

Scharf started at Wells Fargo on Oct. 21, 2019, replacing interim CEO C. Allen Parker, who had held the title on an interim basis since March of 2019. Scharf joined from Bank of New York Mellon, where he was CEO. Before that, he was the CEO at Visa, and prior to that, he was CEO of retail financial services at JPMorgan Chase. At JPMorgan Chase, he was considered CEO Jamie Dimon's "protege."

Scharf has the challenge of his career ahead of him in trying to turn around Wells Fargo. In his first quarter at the helm, there wasn't much good to report. Net income fell to $2.9 billion for the quarter, down from $6.1 billion in the fourth quarter of 2018. Earnings per share declined to $0.60 from $1.21 per share in the fourth quarter of 2018. Earnings were dragged down by $1.5 billion in legal costs from the fake accounts scandal.

Scharf has no delusions about what is in front of him, as he said in the fourth-quarter earnings release:

During my first three months at Wells Fargo my primary focus has been on advancing our required regulatory work with a different sense of urgency and resolve, while beginning to develop a path to improve our financial results. This work is necessary to build the appropriate foundation for us to move forward. Wells Fargo plays an important role for our country, and we know that ultimately our actions and results will dictate when that trust is fully regained.

A Wells Fargo reorganization is underway 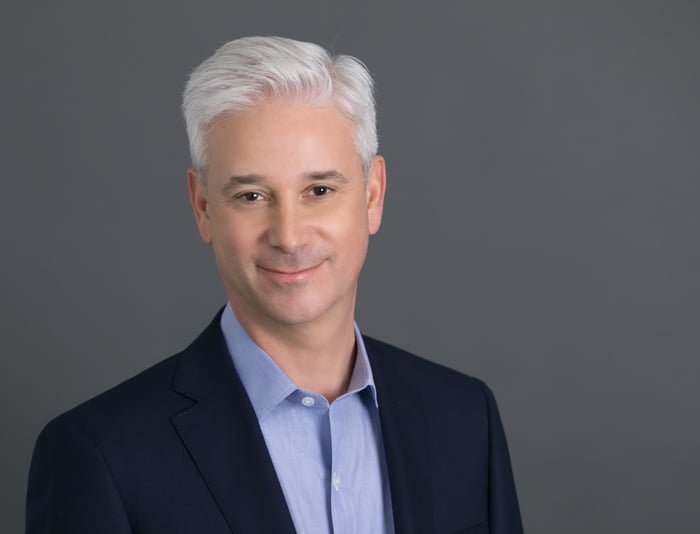 One of Scharf's first big moves was to reorganize the business lines from three to five to create a flatter structure that seeks to improve accountability and responsibility. The business lines, each with their own CEOs, are:

These changes are designed to strengthen customer service, drive operational excellence, and execute on its regulatory priorities, the company said. Each business line CEO reports to Chief Operating Officer Scott Powell, who reports to Scharf. Also, the firm hired someone to oversee a new Sales Practices Oversight and Management program, which establishes an integrated approach to sales practice monitoring, analytics, and reporting. Further, Wells Fargo launched a new Strategy, Digital Platform & Innovation group, which incorporates the former Corporate Strategy, Digital and Innovation teams. The group will focus on planning for the digital future and improving the customer experience.

Is Wells Fargo a buy?

It's hard to recommend Wells Fargo as a buy right now given its struggles -- including this latest bombshell from the Oversight Committee. The bank has a low valuation, at about 9 times earnings and is relatively cheap, but there's been little growth, and the fines, investigations, and lower interest rates won't help matters.

Scharf may be trying to lay the foundation for a turnaround, but investors should wait for signs of positive momentum before thinking about getting on board.