Please ensure Javascript is enabled for purposes of website accessibility
Log In Help Join The Motley Fool
Free Article Join Over 1 Million Premium Members And Get More In-Depth Stock Guidance and Research
By Neha Chamaria - Mar 8, 2020 at 11:24AM

Two "Cs" raise questions about the railroad stock's near future: coal and coronavirus.

Norfolk kicked off February on a strong note after announcing a relatively strong set of fourth-quarter numbers, compared to the info most peers released end-January: It reported 7% lower revenue and a 5% drop in net income year over year, despite macro-headwinds triggered partly by the trade war.

Management expected weak commodity markets and a slump in coal market activity to be offset by stronger merchandise (which includes chemicals, agriculture, automotive, among others) and intermodal volumes. That, however, may not be the case anymore, thanks to the coronavirus. 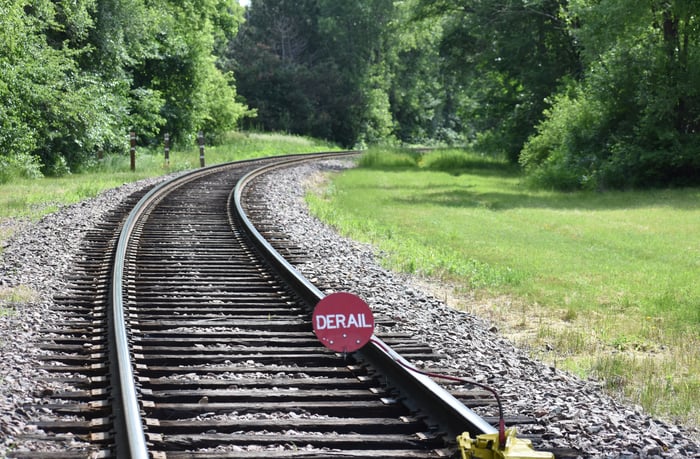 With manufacturing activity in China taking a sharp hit following the COVID-19 coronavirus outbreak, the ripples are being felt through the transportation sector. After the shipping industry, railroads are feeling the pinch, as volumes at ports are drying up after a slump in imports from China. Lower port volumes directly affect intermodal volumes -- intermodal containers transfer goods between two or more modes of transportation, say from ships and trains to trucks.

In 2019, intermodal made up a quarter and coal 15% of Norfolk's revenue. No wonder investors are a worried lot. During Norfolk Southern's Q4 earnings conference call, management already expressed concerns about coal, with Chief Marketing Officer Alan H. Shaw even acknowledging how "additional gas and renewable generation capacity continues to erode coal share of electricity generation" during his overview of 2020. Mid-February, Norfolk even shut down a distribution center in Virginia as coal volumes continued to decline. The coronavirus epidemic has only made matters worse.

To understand how badly U.S. rail traffic is getting hit, all you have to do is take a look at the weekly data released by the Association of American Railroads. For the week ended Feb. 29, total carloads declined 6.5% and intermodal volume is down 12.5%, year over year. Intermodal had dropped only 6% in the week prior. Both weeks, coal traffic saw the biggest declines.

Given the backdrop, investors in Norfolk Southern aren't sure when the company's volumes and revenues will pick up.