Please ensure Javascript is enabled for purposes of website accessibility
Log In Help Join The Motley Fool
Free Article Join Over 1 Million Premium Members And Get More In-Depth Stock Guidance and Research
By Keith Noonan - Updated Mar 9, 2020 at 8:24AM

Health officials are advising people to avoid large crowds, and events are being canceled because of the coronavirus.

Shares of Eventbrite (EB 1.65%) slid 30.9% in February, according to data from S&P Global Market Intelligence. The event-planning and ticketing company was hit hard as its disappointing quarterly earnings and guidance coincided with COVID-19 coronavirus concerns that prompted a sell-off for the broader market. 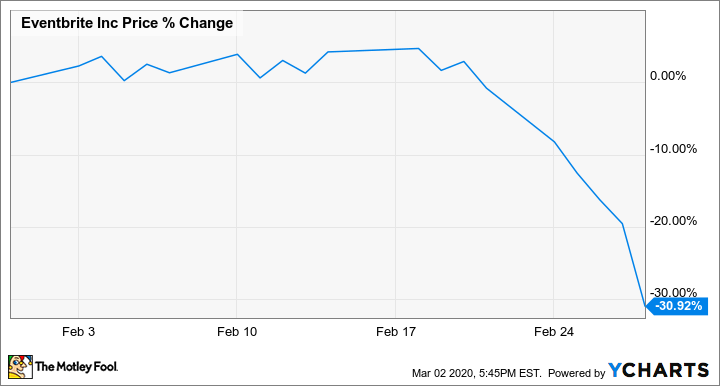 Eventbrite published its fourth-quarter results on Feb. 27, with revenue for the period topping the market's target but earnings per share falling short of expectations. The earnings miss probably wouldn't have been particularly worrying in isolation, but comments from management suggested that the company was seeing a significant increase in event cancellations due to the novel coronavirus officially known as SARS-CoV-2.

Eventbrite reported an adjusted loss per share of roughly $0.16 on revenue of $82.67 million for the fourth quarter, while the average analyst target had called for an adjusted loss of $0.15 on sales of $78.27 million. The earnings miss certainly didn't help the stock, but worrying guidance and movement for the broader market were bigger factors in the share price decline last month.

During the company's fourth-quarter conference call, management stated that roughly 10% of events on its platform see more than half of attendees travel over 100 miles to get there. The company also said that approximately 10% of paid tickets come from events that have more than 5,000 attendees, and management said that the business was seeing event cancellations that appeared to be related to the novel coronavirus.

Eventbrite's slide has continued in March. Shares are down roughly 12% in the month as of this writing. 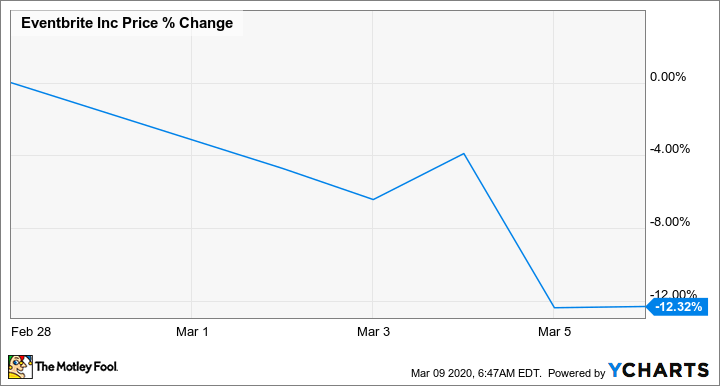 The company expects first-quarter sales to come in between $84 million and $88 million, representing 5.5% year-over-year growth at the midpoint of that range. Full-year sales are expected to be between $342 million and $359 million, representing growth of 7.5% at the midpoint. Management stated that it factored the coronavirus headwinds into its business outlook, but it also cautioned that modeling and quantifying the potential impact was very difficult.

Why Eventbrite Stock Gained 30% in April, but Already Gave It Up