The maker of "NBA 2K" is planning to release its first football gaming experience in more than 10 years in calendar 2021.

On Tuesday, Take-Two Interactive (TTWO 1.90%) and the National Football League (NFL) announced a multiyear agreement to make a series of "non-simulation" game experiences. While there are no specific titles or release dates announced, the first game is planned for launch in calendar 2021, which will be during Take-Two's fiscal year 2022.

This will mark the first time since 2004 that Take-Two has made a football game licensed by the NFL. The last football game Take-Two made was All Pro Football 2K8 in 2007. 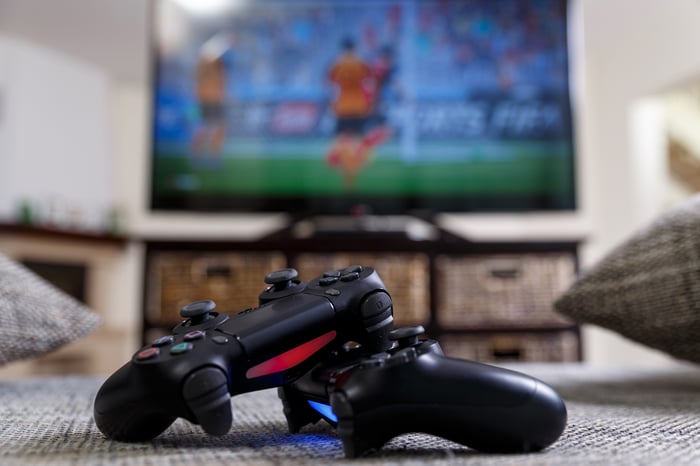 A new catalyst for growth

This is a great way for the NFL to reach new audiences, given struggling ratings in recent years. The average age of viewers for live sports has been getting older, so it's crucial that the NFL does something to connect with younger people. Releasing more licensed video games, as most gamers are between the age of 18 to 49, is a good start on that effort.

"Expanding the NFL’s presence in the world of gaming has become a focus for the League as we look to grow the next generation of our fanbase and reviving our partnership with 2K was a natural step in that effort,” Joe Ruggiero, senior vice president of consumer products at the NFL, was quoted as saying in the press release.

Some video gamers might be disappointed that Take-Two will not be making a simulation NFL game experience to compete with Electronic Arts' (NASDAQ: EA) Madden franchise. Some believe Take-Two's NFL 2K5 released in 2004 was the best football game ever made.

EA noted in a statement today that "EA SPORTS is the exclusive publisher of NFL simulation games, and our partnership with the NFL and NFLPA [players association] remains unchanged. Our agreements have always allowed for non-exclusive development of non-simulation games on various platforms."

It was likely Take-Two's history of making quality sports titles that provided the opportunity to win this deal. Take-Two's NBA 2K is typically one of the highest-rated sports video games every year, along with EA's FIFA franchise.

This is a big deal for Take-Two, which has been gradually expanding its game lineup to grow revenue. THe president of its 2K publishing label, David Ismailer, explained in the press release that this partnership will span "multiple video games centered on fun, approachable, and social experiences."