Troubled times have hit Wall Street. What's an investor to do?

A decade-long bull run on Wall Street has come crashing down in recent weeks, with the S&P 500 giving up more than 15% of its value since mid-February on growing concerns that the COVID-19 coronavirus will drive the U.S. economy into a recession.

Stocks are suddenly much less expensive than they were only a month ago, but as typical in a correction there is a lot less interest in buying them now than there was back when prices were higher. This sell-off has been particularly fast and brutal, going down as the quickest double digit-decline in market history.

The issues driving the sell-off are unlikely to resolve themselves any time soon. We don't really know how far the coronavirus will ultimately spread, or what its total impact on the economy will be, but all signs indicate that impact is still growing.

With so much uncertainty, should you be buying or selling stocks right now?

In January, when the coronavirus was first surfacing in China, the debate on financial television was focused on whether the outbreak would eventually affect the U.S. and other western markets. That debate has now been settled. We now know enough to say for sure there will be a material impact on the U.S. economy, and it could lead us into a recession. The recent acceleration of the selling is the market's reaction to that confirmation.

Regardless of how lethal the virus ends up being, the coronavirus outbreak of 2020 is already creating a far more severe impact to the economy than past outbreaks like SARS or the bird flu. But like with those past outbreaks, there has been nothing to suggest that the end result is anything close to the horror stories of the 1918 Spanish flu pandemic that is estimated to have killed at least 50 million worldwide. 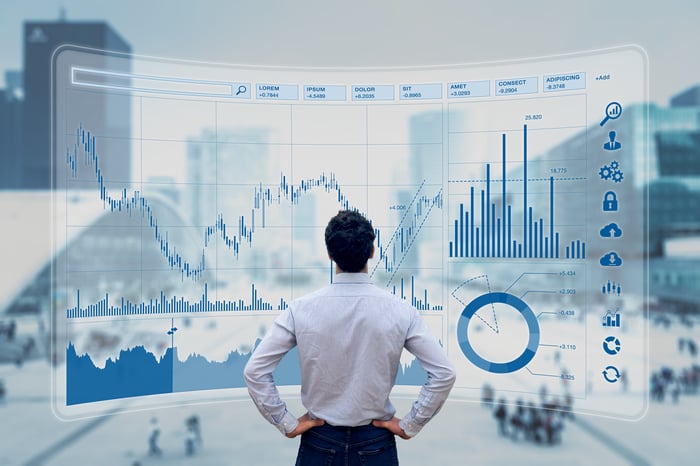 Wall Street tends to be focused on quarterly results, and this current quarter is going to be ugly for broad swaths of the economy. But in China, where the outbreak began, the rate of new cases is declining, and business is getting back to normal.

There is nothing so far to suggest that there will be a permanent impact on businesses, or that earnings will not eventually recover. If you are an investor with a time horizon measured in years, and not the quarters, the recent sell-off offers opportunities to buy quality companies at discounted prices.

Some sectors of the economy will be harder hit than others. Cruise lines and airlines, for example, could take well into 2021 before they recover. But even in the airline sector, where some stocks have lost upwards of 40% of their value in 2020, long-term trends should still drive airline growth over the coming decades.

It is often said investing should be for the long haul, and you shouldn't get too high, or too low, based on one day or one week's results. It's easy to have that long-term mindset when times are good, but as markets come crashing down you get a better sense of who you are, and how much risk you can tolerate.

Individual stocks are not, and should not be, for everyone. Beating the market takes hard work, and many investors can think of a million things they would rather do other than to take the time to research individual companies. Fortunately, there are hundreds of low-cost mutual funds that provide ample exposure to the markets without forcing investors to do all of the work on their own. The Vanguard Total Stock Market ETF (VTI -0.08%) is just one example of such a fund, which can fit in well into nearly any portfolio.

When times are good it can be fun to invest in individual stocks, and be part of the conversation at the water cooler or at the gym. A downturn should be a time for self-reflection. If you are not comfortable seeing the losses, or worse yet can't stand to turn on a television or load a website and see the damage, now's the time to learn that about yourself so you are better prepared for (gulp) the next sell-off that is inevitably right around some corner.

Forget buy vs. sell, there is a third option

Even if you don't have the stomach to buy into the downturn, you can still come out ahead by avoiding the temptation to sell. Between May 2008 and February 2009, the S&P 500 lost nearly half of its value, and more than a few investors surely decided that Wall Street was not for them and were tempted to put their long-term savings in a bank vault instead of in the markets. 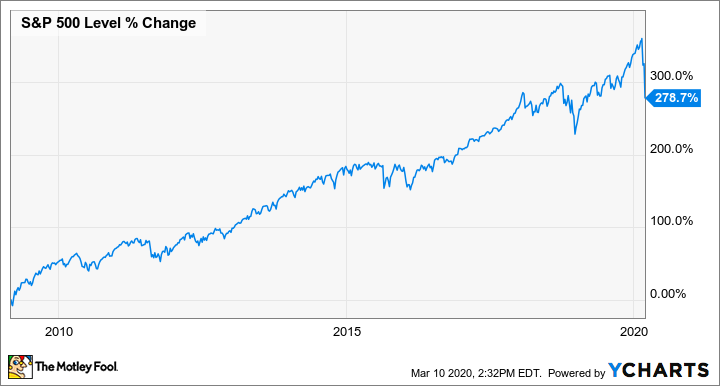 That would have been a colossal mistake. In the five years that followed the S&P 500 climbed more than 153%, and investors who have hung in there for the entire duration are still up more than 279% even after the recent market sell-off.

Motley Fool co-founder David Gardner is fond of saying, "stocks always go down faster than they go up, but they always go up more than they go down." The best way to make money over the long haul is to stay invested through ups and downs, either in individual company stocks or in index funds.

It is a scary time to be an investor. I know my household is feeling the weight from what we have lost in recent weeks. But there will be a rally eventually, and if history is a guide that rally will more than make up for today's losses. Keep calm and invest on.

How Vanguard's Dividend ETFs Have Done in 2017