Please ensure Javascript is enabled for purposes of website accessibility
Log In Help Join The Motley Fool
Free Article Join Over 1 Million Premium Members And Get More In-Depth Stock Guidance and Research
By George Budwell - Updated Mar 10, 2020 at 11:19AM

No one can predict the future. Attempting to decipher whether yesterday's 2,013-point plunge in the Dow Jones Industrial Average was an aberration or the start of a new bear market is essentially a waste of time. What we do know for sure is that the U.S. stock markets will eventually recover. In 20 years' time, the Dow is far more likely to surpass the 50,000 mark than sink back to the 10,000 level.

A Great Depression isn't imminent, and there has been too much progress in the digital age for the economy not to regain its footing at some point soon. So, in a word, yesterday's bloodbath in the markets should turn out to be nothing more than a once-in-a-lifetime buying opportunity for investors with a long-term horizon (10 years or more).

Which stocks are now too cheap too ignore on the heels of this historic sell-off? I plan on buying these three high-growth biopharma stocks on any further weakness: Amicus Therapeutics (FOLD 3.48%), Amarin (AMRN 10.67%), and CRISPR Therapeutics (CRSP 5.47%). Here's why. 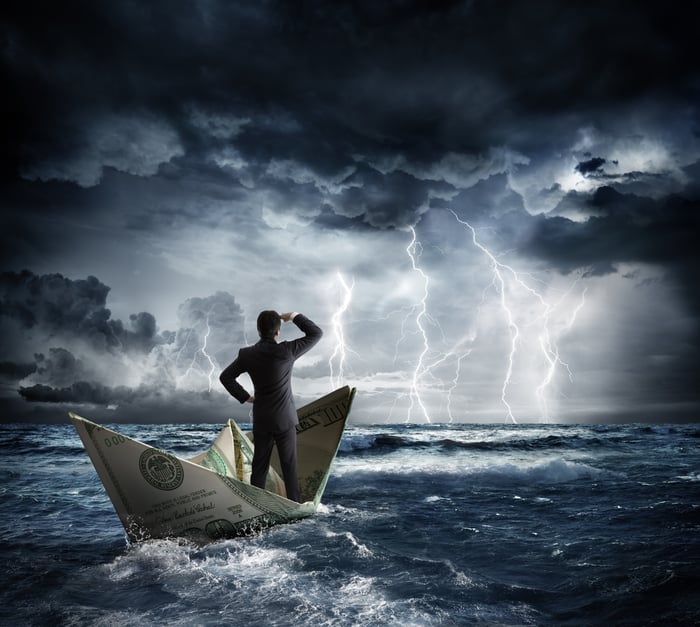 Amicus makes drugs for rare diseases. What makes this company such a compelling long-term buy and hold is its well-defined path toward value creation. Right now Amicus is in the midst of commercializing its first product, Galafold. Galafold is an oral medication for a rare genetic disorder known as Fabry disease, a condition characterized by the buildup of a certain type of fat in the body's cells. Galafold's sales have been fairly modest so far, but the drug is forecast to achieve $1 billion in peak sales in the latter half of the current decade.

Next up, the drugmaker is quickly advancing its second blockbuster candidate, AT-GAA. AT-GAA is an experimental treatment for late-onset Pompe disease, another rare, genetically based fat storage disorder. The company expects to initiate a rolling biologics license application for AT-GAA later this year. Wall Street's current estimate has AT-GAA's peak sales exceeding $2 billion before the end of the decade. Later down the line, Amicus is also developing gene therapies for an array of rare diseases.

The main takeaway is that Amicus' market cap of $2.1 billion clearly doesn't reflect even a small fraction of its long-term promise. Galafold and AT-GAA alone should generate no less than $2 billion in annual sales by 2028, if not much sooner. So if you're a patient person, this rare disease stock should definitely be on your radar right now.

Amarin has had a really tough 2020 so far. Despite the drugmaker's posting strong fourth-quarter and full-year results late last month, its stock has now lost almost a third of its value since the start of 2020. Investors have fled this name for a single reason: Amarin's buyout thesis no longer appears to be viable -- at least in the near term. The company's beeline move lower this year, however, has arguably created a tremendous buying opportunity.

The big picture is that Amarin's bear thesis -- that its prescription omega-3 pill Vascepa will be a commercial flop -- has totally fallen apart. As proof, Vascepa's sales are expected to hit $700 million this year and then top $1 billion in 2021. By 2023, Vascepa could very well be hauling in over $2 billion in annual sales. The only remaining question is whether Vascepa will hit megablockbuster status (greater than $5 billion in annual sales). Personally, I think it will, and much sooner than many expect. That's why I plan to continue to add to my position in Amarin on this dip.

CRISPR Therapeutics: An industrywide disrupter in the making

The novel gene-editing company CRISPR Therapeutics is down by 24.5% for the year. That's a sharp decline to be sure, but one that should prove to be an outstanding entry point for patient investors. The headline with this stock is that CRISPR is developing a gene-editing system, CRISPR/Cas9, that could revolutionize the fields of rare diseases, cancer, and possibly even diabetes and obesity. As things stand now, the company is working with partner Vertex Pharmaceuticals (VRTX 3.02%) on a pioneering gene-edited therapy, CTX001, as a curative treatment for the rare blood disorders sickle cell disease and beta thalassemia.

If CRISPR and Vertex strike gold in this closely watched clinical trial, the sky could be the limit for this midcap biotech stock. There's no doubt that Vertex or another entity will attempt to make a play for CRISPR's platform, but the company would likely rebuff such attempts in order to create value as a stand-alone entity. The fact of the matter is that a buyout -- even at a sky-high premium -- would more than likely grossly undervalue the company. CRISPR/Cas9, in effect, stands to be a game changer in biotech. It's hard to put a price on such a unique tool.

All that being said, CRISPR's system may also crash and burn. At this crucial stage, it's basically a high-profile science experiment -- a fact that eager investors should keep firmly in mind. So while I do plan on boosting my position in this stock soon, I won't be going hog wild. Too many things can still go wrong.