Please ensure Javascript is enabled for purposes of website accessibility
Log In Help Join The Motley Fool
Free Article Join Over 1 Million Premium Members And Get More In-Depth Stock Guidance and Research
By James Brumley - Mar 11, 2020 at 8:00AM

The e-commerce powerhouse is finding fewer logistics companies are interested in its terms, while at the same time it and contractors face related lawsuits.

In February, roughly 3,200 delivery drivers working for companies contracted by e-commerce giant Amazon.com (AMZN -2.47%) were told they'd be out of a job come April since Amazon was terminating their employer's contract. Those drivers will be able to apply for a position with whichever new logistics name Amazon chooses to replace the ones being dropped, of course. But there are no guarantees.

Were it the first time consumers, drivers, and even investors had seen such a headline, they might dismiss it. But it was all-too-familiar news. Over just the past few months, Amazon has severed ties with no fewer than seven logistics companies, many of which are responsible for the "last mile" service that places packages at consumers' doorsteps.

It's becoming more than a minor nuisance, too. Delivery service providers and their drivers may now be so distrustful of working with Amazon that they no longer will. Some are also entangled in legal battles resulting from their contracts with the company. Yet now that Amazon has made one-day shipping the norm for Amazon Prime orders, the company needs drivers more than ever.

The best solution may be the one Amazon likes least: hiring its own drivers.

Use of contractors turning into a headache

It would be easy to assume otherwise, but the drivers of the Amazon Prime vans you see on the streets aren't actually Amazon employees. They're contractors. So are the drivers of the blue semitractor-trailers with the Amazon smile/arrow logo painted on the side. Amazon owns the trucks but doesn't directly employ the drivers. Rather Amazon hires logistics companies to ... well, figure out the logistics of getting a truckload or van load of goods from point A to point B within a particular time frame. 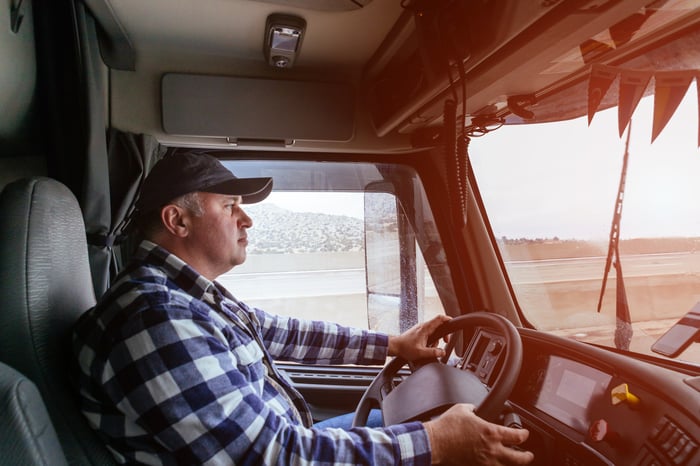 There are two benefits to using contracted drivers. It's less expensive to terminate a contract with a service provider than it is to terminate an employee, which gives Amazon the flexibility to scale down an operation if it needs to. The other upside is that the logistics company itself rather than Amazon is responsible for ensuring that its drivers operate within regulatory guidelines.

But this system is not without its drawbacks. One is the inevitable pricing pressure now forcing some drivers and logistics companies to rethink their relationships with Amazon.com. "Amazon is really trying to monopolize the transportation side and dictate their own terms," explained regional trucking company director Daniel Lacroix last year, adding, "People can choose if they want to work with them or not. But some people are going into the business [to work with Amazon], then they realize there's not enough money to operate with them."

Lacroix is hardly alone in his sentiment.

It's not just the pricing impasse that's come to a head, either. Legal challenges are starting to surface -- in numbers -- as a result of Amazon's ever-increasing pressure on its delivery service providers.

Take for instance truck driver Timothy Weakley. He filed a lawsuit against his employer, AAA Freight, as well as Amazon in January, following a crash that occurred after he had warned both companies he had frequently exceeded his daily driving time limit. Weakley's legal argument complains Amazon and AAA Freight "willfully and routinely coerced" him to violate the Federal Motor Carrier Safety Act.

Meanwhile, at least 10 contracted Amazon delivery van drivers have been involved in fatal accidents. Many of these accidents, like many of several dozen nonfatal ones involving subcontracted delivery services, were determined by the Labor Department to involve underpaid or overworked drivers. That puts Amazon on the radar even if not yet in the proverbial hot seat.

Lawsuits related to these last-mile van accidents are starting to take shape in a big way as well. Terry Doles' attorneys claim his motorcycle was sent airborne after a delivery van driver didn't yield as required, leading to an accident that left him hospitalized. Doles' lawsuit names Amazon as well as the contracted delivery company as a defendant.

Amazon Flex driver Bernard Waithaka is in the midst of a different but related argument. He and other Massachusetts delivery drivers allege they've been improperly classified as contractors when they are in effect employees of the e-commerce giant.

The strength of these arguments and the dozens of others that call into question how strong Amazon's legal firewall is remains to be seen. The arguments are materializing more and more often, though, now numbering in the hundreds. Eventually, enough of them could chip away at the legal-protection premise of contracted drivers.

The saga couldn't have started at a more inopportune time. Amazon has turned up the heat on one-day delivery, but that effort prodded its shipping costs higher by 43% during the fourth quarter. That's far more than sales grew during that quarter. That's why the company is doing everything it can to extract more work from contracted drivers than it arguably ought to be able to.

With the legal and even logistical headaches mounting, though, from here it may well be easier and even more effective for Amazon to build its own driver workforce with actual employees instead of contractors.

It's already done so in a limited way. After severing ties with Pinnacle Logistics -- which handled Amazon's freight duties at the Baltimore/Washington International Airport -- Amazon hired most of the workers outright to do the same job they had been doing. Perhaps it will make similar decisions going forward.

If that's the direction in which Amazon wants to take all its delivery work, it won't be cheap, easy, or quick to build such a system. The upside is that the e-commerce powerhouse won't have to worry about managing more than 800 different delivery partners, nor about trying to keep them afloat even as it finds new ones to replace the ones it's canceling contracts with. It will just hire (and fire) as needed if that approach becomes the new norm. More than anything, though, if in-house delivery work ends up being the new norm, Amazon will enjoy greater flexibility in how it uses drivers.

Those are all very big ifs, of course, but they're ifs investors need to put on their radars. Homegrown shipping may well become the company's biggest nightmare or its biggest growth driver.

John Mackey, CEO of Whole Foods Market, an Amazon subsidiary, is a member of The Motley Fool's board of directors. James Brumley has no position in any of the stocks mentioned. The Motley Fool owns shares of and recommends Amazon. The Motley Fool has a disclosure policy.