Please ensure Javascript is enabled for purposes of website accessibility
Log In Help Join The Motley Fool
Free Article Join Over 1 Million Premium Members And Get More In-Depth Stock Guidance and Research
By Donna Fuscaldo - Mar 11, 2020 at 10:30AM

Requiring 401(k) plan sponsors to lay out how much savers will get on a monthly basis in retirement may be eye-opening for many Americans.

Putting away $500,000 for retirement seems like a lot, but it may not be enough to sustain you during your golden years.

That's an eye-opener for sure, one that will become more common thanks to the Setting Every Community Up for Retirement Enhancement Act, otherwise known as the SECURE Act. Signed into law by President Donald Trump in late 2019, the act is designed to expand and preserve retirement savings. It makes it easier for small businesses to offer company-sponsored retirement plans, it increases the cap for automatic contributions to 15% from 10%, and it repeals the rule that prevents people from making contributions to a traditional IRA when they reach the age of 70 1/2.

As of the beginning of 2020 when the SECURE Act went into effect, 401(k) plan administrators have a year before they have to provide employees with a lifetime income disclosure annually. These statements will show the amount of money you may receive each month based on the balance in your 401(k). The thinking is that if you have a better idea of how much your money will get you in retirement, you will be able to identify a shortfall at an earlier point.

According to Schwab Retirement Plan Services, participants believe they need $1.7 million on average to retire, yet many aren't investing enough to reach that level. 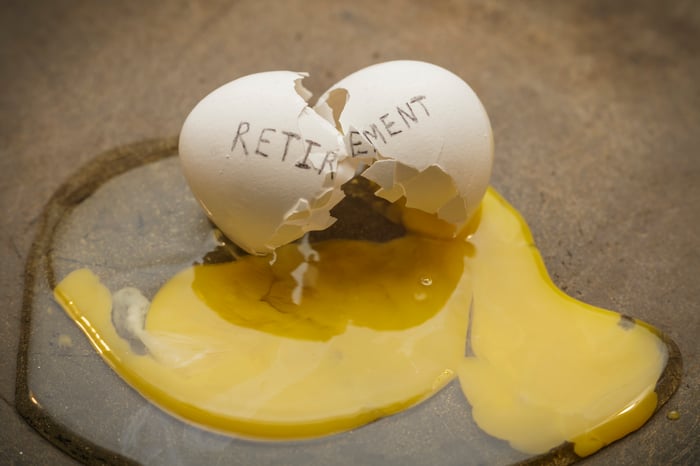 401(k) plan statements that break out the monthly income from retirement may result in a necessary retirement savings wake-up call. According to a 2019 study by Northwestern Mutual, 22% of Americans have less than $5,000 saved for retirement.

Meanwhile, 15% have no savings for retirement at all. Among baby boomers, of whom 10,000 daily turn 65, 17% have less than $5,000 saved for retirement. Close to half of working adults don't plan on retiring at age 65. And more than half of Americans don't even know how much they will need to retire comfortably.

Don't become the next statistic

Those are some scary statistics, but you don't have to become one, nor do you have to wait for the SECURE Act disclosures to call your attention to a deficit. There are actions you can take and plans you can make for the future if you fear you'll have a retirement savings shortfall.

If you have a 401(k), the easiest and most effective action is to raise the percentage of your income that goes toward it (though always make sure you have an emergency fund in place before increasing any of your investments). As of the end of 2019, employees were able to contribute up to $19,000 to their 401(k) plan, yet only a small percentage do so. In a 2018 study, Vanguard found that only 13% of plan participants maxed out their 401(k) contributions. Raising your annual contribution rate will also increase your returns because of the benefit of compounding.

For workers who don't have access to a 401(k) but still want to save for retirement, there are individual retirement accounts, otherwise known as IRAs. An IRA is a tax-advantaged investment account that lets you contribute pre-tax dollars. Distributions, which can begin when you reach age 59 1/2, are taxed as ordinary income. Individuals can contribute as much as $6,000 a year. For those over the age of 50, the contribution level increases to $7,000. A Roth IRA is another option, in which you are taxed when you make the contributions but all withdrawals after the age of 59 1/2 are tax-free.

Of course, another option is to work longer than you had originally planned. The more years you're earning income, the greater the sum you can save, whether it's through a 401(k) or an IRA.

If your retirement shortfall is severe, it may require you to think differently about your retirement plans. Downsizing your living arrangements, choosing a cheaper place to retire to, or accepting that you may need a part-time job to supplement your income are all options.

While the SECURE Act may create a lot of sleepless nights in America, it could also prompt action. Sometimes it's a dose of cold, hard reality that mobilizes us. If it's to save more for retirement, then everyone wins.