Please ensure Javascript is enabled for purposes of website accessibility
Log In Help Join The Motley Fool
Free Article Join Over 1 Million Premium Members And Get More In-Depth Stock Guidance and Research
By Rich Smith - Mar 11, 2020 at 10:45AM

Ammo demand is booming, so why is this stock down?

It didn't take a fortune-teller to predict this one: Fears of a Coronavirus apocalypse are having the expected effect among disaster "preppers" in America, who are now buying ammunition in bulk.

As Ammo.com announced on Friday, the past couple of weeks have seen a 68% increase in online purchases of ammunition through its website -- with spikes well above 100% in multiple states, reports Fox Business. One of the biggest brands benefiting from the sales is Winchester, the ammunition brand manufactured by Olin Corporation (OLN 3.00%). 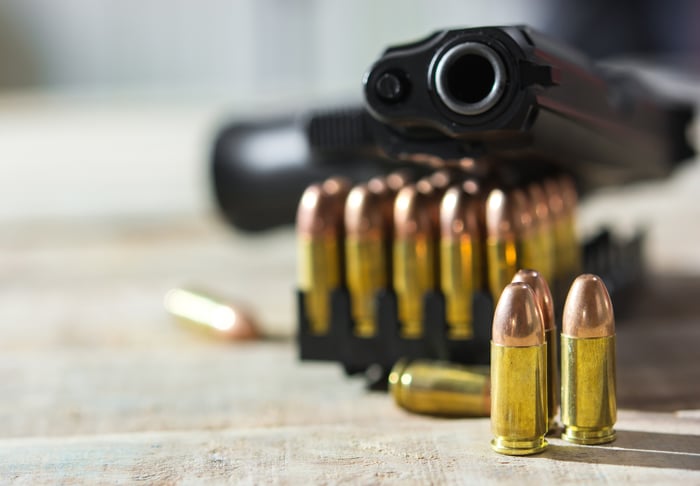 On the face of it, this seems illogical. Ammo sales up -- ammo stocks up, right?

Well, consider the details. Yes, Olin makes ammunition for guns. But according to data from S&P Global Market Intelligence, Winchester is actually the smallest of Olin's business segments, representing only an 11% sliver of the company's annual sales. (The company actually makes much more money from selling bulk chemicals such as vinyls and epoxy.)

Even if firearms ammunition sales in the U.S. were to literally double, therefore, they'd still make up only 22% of the company's total business. That's maybe enough to move the needle a bit but not enough to remake the company -- or even, necessarily, turn it profitable. (Olin lost $11 million last year).

Meanwhile, a second news item could be weighing on Olin stock even further. Yesterday, retailer Dick's Sporting Goods (DKS 8.40%) announced that it will halt sales of firearms in about half of its stores that still sell them. This will leave only 20% of the chain's stores still selling firearms.

Fewer guns being sold almost certainly will have the follow-on effect of lessened demand for ammunition to load into them. Although that's a factor not specific to Olin, it certainly should be taken into account in estimating future sales of ammunition.

That might be precisely what Olin investors are doing today.