Zillow Group's (NASDAQ:Z)(NASDAQ:ZG) stock soared as much as 22% the day after it reported stellar fourth-quarter results last month. Since then, the stock has given back all those gains and more due to the spread of, and panic over, the novel coronavirus outbreak. But sooner or later this too shall pass, and eventually, investors will return to focusing on the impressive execution this online real estate database and realty service has been showing over the last year.

What's been contributing to Zillow crushing expectations of late?

The company's core business, Premier Agent, has clearly turned the corner. Premier Agent makes money by selling home buyer leads to agents who help those people buy homes. Those who do buy homes generate commissions for the agents. This business was growing revenue rapidly until late in 2018, when it slowed to 11% growth in the fourth quarter before plummeting to 2% growth and close to 0% growth in the first and second quarters of last year, respectively.

The culprit was management's plan to improve the quality of the potential home buyers it would pass along to its agent-partners as leads. The company began screening these potential buyers to ensure they were serious about potentially buying a home, and started only passing along a smaller number of these higher-qualified leads. Many agents balked at receiving fewer leads and stopped paying for Premier Agent, which caused severe revenue slowdown. 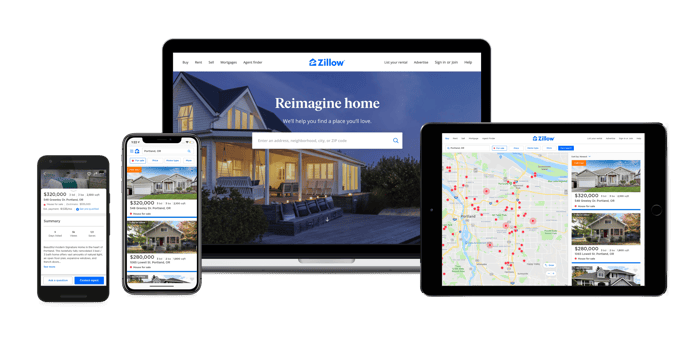 Management fixed the problem by reverting to passing along all leads -- both the higher-qualified leads and the lower quality ones. This stabilized the business and has now returned it to growth. Premier Agent revenue accelerated to 3% growth in the third quarter and 6% last quarter.

But the underlying growth is even faster. In some markets, the company is testing a new revenue model called Flex, in which Zillow gets paid a few months or quarters later than usual. Excluding the markets that are testing Flex, the company's monthly recurring revenue ended last year growing 12%. Given that many analysts had given up hope on this business not long ago, these improving results beat expectations.

Possibly even more impressive than the Premier Agent turnaround is the company's cost control initiatives in its core business. When the company's co-founder, Rich Barton, took over as CEO early last year, CFO Allen Parker said the company would be "building processes and initiating actions to go after this discretionary or controllable spend." Since then, the company has delivered on that objective in spades.

Adjusted EBITDA (earnings before interest, taxes, depreciation, and amortization), a proxy for cash flow, margin in the core Internet, Media, and Technology ("IMT") business improved every quarter last year. For the full year, it improved to almost 24% from 20%. Furthermore, management's outlook for 2020 calls for another improvement to about 27% or 28%. Zillow has never been accused of running a lean, mean, profit-maximizing machine, so it is reasonable to think there is even more improvement ahead.

This also shows that the company is on track to hit its target of achieving $600 million of adjusted EBITDA in the IMT segment within three to five years. Last year, the first year of the plan, the company grew that metric 27% to $304 million. Management's outlook calls for another 24% growth at the mid-point of their guidance range this year. If that roughly 25% two-year growth rate continues, the company would generate $594 million in 2022, four years into the plan, and $746 million five years into it.

Zillow's start-up business of buying and selling homes, Zillow Offers, is also beating expectations. In the fourth quarter, Zillow sold 1,902 homes and bought 1,787 homes, which made it the first quarter it sold more than it bought.

Management attributed this not to any surprising slowdown in their home-buying plans, but simply to selling more homes than they expected considering the usual seasonal slowdown in real estate that occurs in the fourth quarter. This higher number of homes sold than expected resulted in $603 million of revenue in the Homes segment, which smashed management's prior guidance of $465 million to $490 million.

While it is unclear when the world will get COVID-19 (the disease caused by coronavirus) under control, whenever we get past it, investors are likely to refocus on how Zillow has been crushing expectations.